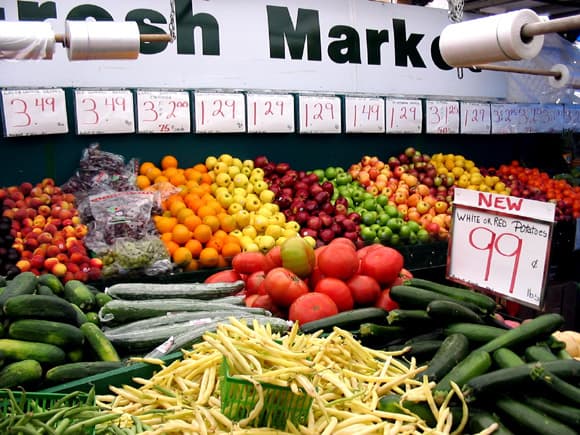 Colours of the Market. Located near the corner of Parkdale and Wellington in the heart of Hintonburg, the Parkdale Market first opened its doors over 75 years ago. Photo by Glen Gower.[/caption]

Despite having strong community support, the Ottawa Farmers Market couldn’t muster enough vendor support for a market in Stittsville this year to make economic sense.

But the president of the OFM said that they will try again next year.

“We are still open to looking at this as a future possibility,” Greer Knox said on Wednesday. “We’re all disappointed.”

There were a few reasons why the plan for a market went kaput, Knox said, and they came down to the issue of money and vendor interest.

“We got a very limited response from our agricultural vendors,” she said.

This was mainly because heavy rainfall has led to lower crop yields this season, coupled with the fact that the market would have opened on Fridays and run into the evening when most vendors also have to get up in the morning for Saturday markets.

The city initially wanted to charge whole rent for the use of Village Square Park, even though the market would only operate for a few hours once a week and use a fraction of the space, Knox said.

“That was sort of last-minute,” she said. “(But) the city did move a bit,” and they got a reduced rate.

But the trouble did not end there. Even with the reduced rate the low number of interested vendors did not make up enough for the rent and other expenses, such as advertising and staff.

“We needed more vendors to cover that cost,” Knox said.

The news that the market won’t go ahead this year was surprising, said councillor Shad Qadri.

He announced in his weekly newsletter in early June that “the market is planned to open toward the end of June,” after discussions with market officials. It wasn’t until the OFM informed him early this week that he knew the plan was bust.

He said that he was aware of the rent issue, but understood it was resolved. The city uses a standard formula to determine how much rent should be paid, he said.

There is no reason why the OFM can’t try again next year with the same level of public support, he said. Greer Knox agreed.

“I think it’s very possible it would be a viable market,” she said. _ This was originally published on our sister site StittsvilleCentral.ca _ .

Don’t miss this special show by ** Iva ** (Kathleen Ivaluarjuk Merritt) whose music is a melodic mix of Inuit throat-singing, poetry-infused and Celtic-influenced folk music at the ** Canadian Museum of Nature ** on ** Friday, July 22. ** Iva’s début album _ Ivaluarjuk: Ice, Lines & Sealskin _ (2015) celebrates life and identity; bridging sounds from both her Inuit and Irish roots. ...

_ (Via Ottawa Paramedics) _ Ottawa Paramedics and the Canadian Ski Patrol special events team were kept very busy at Bluesfest on Thursday night, over 200 patients were assessed and managed by the on-site medical team inside the Bluesfest fence., an additional 10 calls occurred in the immediate area surrounding the event. ...