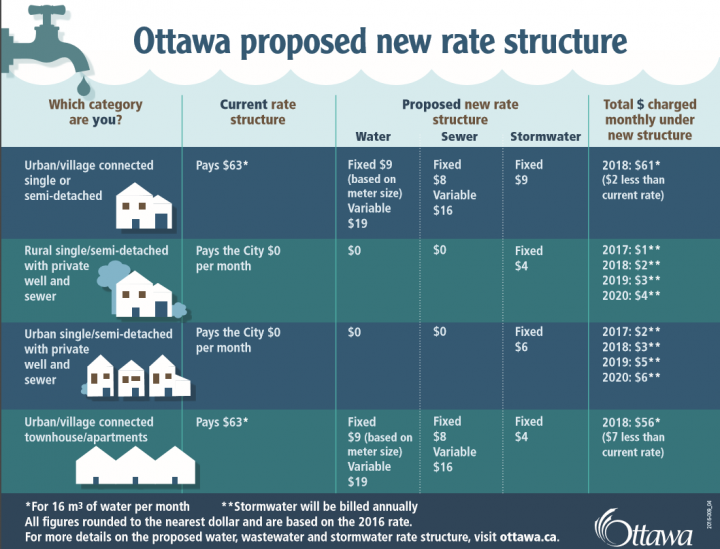 The city released its proposed new water rate structure Monday and it could mean a small increase to your bill.

The structure would add a flat connection fee to your bill on top of the existing rate based on water usage. It would also break the sewer surcharge into two items: a fixed-and-variable rate sewer fee and a fixed-rate stormwater fee.

City staff say the change is needed because while water consumption keeps going down, infrastructure costs keep going up.

In a memo, Environment Committee chair David Chernushenko said 85 per cent of Ottawa households would see either no change, an increase or a decrease of less than $2 to their bills. However, he wrote households with low water use would see an increase.

Homes that use wells and have their own sewer would pay only a fixed stormwater fee, phased in over four years.

The proposal will be debated at the city’s environment committee on Oct. 18.

If approved, changes would take effect January 2018. You can find more information about the proposed changes, including commercial rates, at ottawa.ca…

https://www.flickr.com/photos/xiaozhuli/10200734283/in/pool-ottawastart/ _ Photo: [ Island Park Drive by Zhu, via the OttawaStart Flickr group ](https://www.flickr.com/photos/xiaozhuli/10200734283/in/pool-ottawastart/) _ ** _ Try the free shuttle service to access Gatineau Park’s scenic lookouts _ ** Over the next few weeks, the fall foliage will brighten the Capital Region’s parks, pathways and shorelines with a spectacular display of colour—making this the perfect time to explore Gatineau Park and the Greenbelt. ...

_ (press release) _ ** Ottawa ** – Today, Mayor Jim Watson, Councillor Keith Egli, Chair of the City’s Transportation Committee, and Orléans Councillor Bob Monette unveiled a new red-light camera at the intersection of St. Joseph Boulevard and Old Tenth Line Road, making it the first of five new red-light cameras that will be installed throughout the city in 2016 with 15 more to be installed in 2017. ...