Carleton University this week conferred a Doctor of Laws, _ honoris causa _ , on Daniel Alfredsson in recognition of his outstanding contributions to Canadian hockey and, in particular, his commitment to the community through philanthropic efforts that include mental health awareness and advocacy for equality for athletes, regardless of their sexual orientation.

Alfredsson was honoured during the first day of spring Convocation. About 4,380 students will be receiving their degrees over four days of ceremonies.

“In hockey, as in life, it’s not the smartest, the toughest or the fastest who is going to win,” said Alfredsson. “It’s the hardest working, it’s the most disciplined, the most focused – and the one who never ever stops believing in themselves that always has an edge.”

Born in Gothenburg, Sweden, “Alfie” was a member of the Ottawa Senators Hockey Club from 1994 to 2013, including 14 years as team captain. He and his wife Brigitte have four sons — Hugo, Louis, Fenix and William.

He won the National Hockey League Rookie of the Year in 1996, and two NHL leadership awards — the 2012 King Clancy Memorial trophy and the 2013 Mark Messier Leadership award.

Alfredsson is most proud of his work in Ottawa fighting the stigma against mental illness. His efforts have helped people open up and talk about mental health. 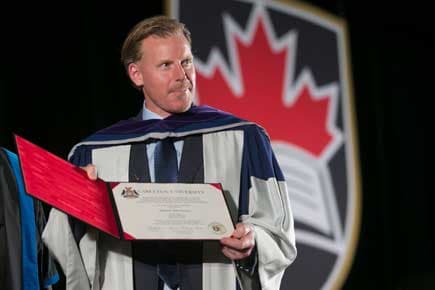 _ (press release) _ In May 2015, ** Brew Donkey ** made the bold decision to offer its tours free of charge, after the ** Travel Industry Council of Ontario (TICO) ** notified them that the company was not compliant with the Travel Industry Act because it was providing a regulated travel service without being registered. ...