TSN 1200 Ottawa showcased the BlackJacks semifinal run during the 2020 CEBL Summer Series, its first season in the CEBL. The nation’s capital all-sports station will again simulcast all BlackJacks games but for the first time, the call will come courtside at the Arena at TD Place beginning June 24 at 7 p.m. when the BlackJacks open the 2021 CEBL campaign against the Niagara River Lions.

The broadcast crew tasked with calling the action possess a great combination of experience, expertise, and excitement.

Jakubec is a 24-year sports broadcasting veteran, who has been at TSN 1200 Ottawa for 15 years after stops throughout British Columbia and his native Edmonton. Jakubec’s first basketball call was as the voice of the Alberta Golden Bears and Pandas from 2001-03. In Ottawa, he has brought the action to viewers and listeners during numerous Carleton Ravens and Ottawa Gee-Gees games, including the annual Capital Hoops Classic and multiple U SPORTS Championships. His local play-by-play experience includes work with the Ottawa REDBLACKS, Ottawa 67’s, Ottawa Senators, Edmonton Oil Kings, Atlético Ottawa, and Ottawa Fury FC, in addition to the 2015 FIFA Women’s World Cup.

A well-known basketball face in Ottawa, Sunley-Paisley,left her hometown of Toronto at the age of 18 to play basketball for the University of Ottawa. A storied collegiate career, she graduated in 2012 with a Bachelor of Arts, three All-Canadian awards to her name, and a bronze medal at nationals in her final year. Sunley-Paisley went on to play a year of professional basketball in Germany. While there, she began to write her first full length novel. In the fall of 2014, Paisley hung up her basketball shoes, and went back to school. She spent a year in college before deciding to focus on her writing, and coaching. She started coaching with Ottawa Next Level and loved it, but after a couple years of being on the sideline, she realized she wasn’t done with basketball. She started training again, and in the fall of 2016, signed her second professional contract, this time in France. She played for three years in France, and in her final season of professional basketball, she published her first novel, Magic Required. Now, living in Ottawa, she works as a personal trainer, Crossfit coach and YouTuber.

El-Zein has become a true basketball insider. His understanding of the game as well as his knowledge of the Ottawa/Gatineau basketball community will be showcased throughout each broadcast, keeping the fans informed and engaged during every BlackJacks game. El-Zein graduated in Radio Broadcasting at Algonquin College in 2012 and then specialized in Sports Broadcasting. During the 2014-15 U SPORTS season, El-Zein became the play-by-play commentator for the Carleton Ravens men’s and women’s basketball teams. In March of 2016, El-Zein and his friends started a basketball podcast called 3-in-the Key. Two years later, they had their first live radio show on TSN 1200 Ottawa. 3-in-the Key is now live every Sunday at noon talking about the CEBL, NBA, NCAA and U SPORTS. Roaming the CEBL sidelines this season, El-Zein will bring details from within the huddles to fans watching and listening at home.

Along with listening on AM 1200 in the Greater Ottawa Region, fans can listen live at TSN1200.ca and through the TSN app. The station’s podcasts are available on-demand at TSN1200.ca. 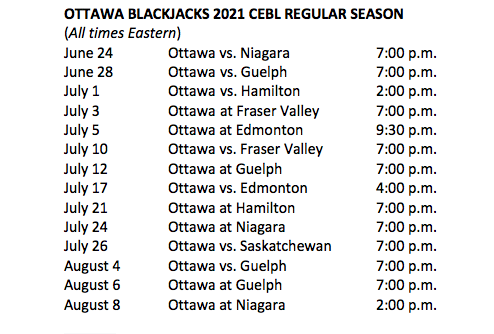 Ottawa, along with the rest of Ontario, will enter step 1 of the province’s so-called Roadmap to Reopen on Friday, June 11. As of 12:01 a.m. on Friday, outdoor dining will once again be allowed. Per a City of Ottawa memo released on Wednesday, here are the topline details. ...