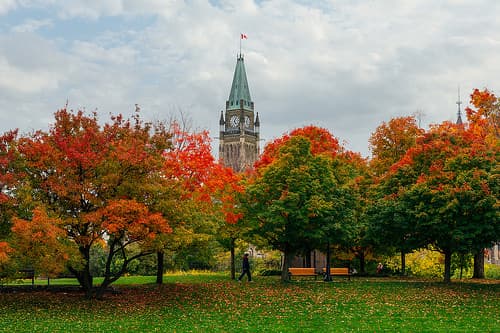 As autumn rolls in, _ ** OttawaStart.com ** _ is taking a look at some of the new music released over summer in Ottawa/by local music groups (In no particular order):

** “Drought” ** by How Far To Mexico was released in early June.

Here is the first track (and our favourite), “Fools”:

Drought by How Far To Mexico

How Far to Mexico describes their music as “psychidyllic escapist jingle jangle indie-pop,” probably the most unique form out there.

We liked the second track, FM, which begins with what sounds like a scan of the Ottawa FM radio band:

** “Graceland” ** by Steve Adamyk Band was released through Portland Ore. based label Dirtnap Records on July 29.

We liked the second track, “Carry On”:

The album can be ordered on Dirtnap Record’s bandcamp. ** “Split w Kings Quest” ** by Heavy Bedroom hit the internet on June 22. It’s also available on cassette, if you feel like having it eaten up.

** “Spring EP” ** was, despite its name, released on June 27 by the Nepean-based alternative indie group PRAYER WHEELS.

** “Missioner EP” ** by the eponymous Missioner came out July 29, with perhaps the most bizarre artwork we’ve ever seen. Ah well, such is art.

The group records for the Radicalized Records, Pirates Blend and Tribal Spirits Music labels. They are quite well-known, with over 100,000 likes on Facebook.

They have a tour across Canada and the U.S. from September 18 to December 15.

** “Anymore” ** is Grace Lachance’s first single through a record label. The Stittsville singer released it in late August through Universal Music Canada.

It’s been a little over a year since Lachance won Bluesfest’s _ She’s The One _ contest, which afforded her the opportunity to release this single.

Her radio debut was on JUMP 106.9 in Ottawa, which set off a province-wide radio tour in cities such as Kitchener, Toronto and Kingston.

** “Misgiving” ** by Ryan Fitz, who is also a promoter for other local bands. Fitz tipped us off to a few pieces in this list.

Know any other stuff we should include? Tweet us @OttawaStart

_ (press release) _ ** Ottawa – ** Today the Ottawa 2017 Bureau and Mayor Jim Watson, in collaboration with lead partner CIBC, announced fourteen projects that will receive a total of $250,000 in funding to create vibrant experiences that will highlight Ottawa’s diverse arts, culture and heritage offerings during Canada’s sesquicentennial celebrations. ...

_ (Via councillor George Darouze ) _ Dear Premier Wynne, Every day in the Province of Ontario, Hydro One customers are faced with the choice between feeding their families and turning on the lights. How can the province allow things to get so bad for its own citizens to choose between basic needs? ...