** Erica Wiebe’s ** journey to the Olympics in Rio started when she was in Grade 9 at Sacred Heart High School. That’s when she saw a poster for co-ed wrestling practice.

“I was playing competitive soccer from a pretty young age. I played every sport in high school and in grade 9 one of the sports offered was wrestling,” she says. “Right away I just loved it. It’s unlike anything else. You get to touch somebody, put your hands on them. But it’s tactical too, like a very sweaty chess game.” Wiebe, who just turned 27, is in the final stretch of training for the Olympic Games in August, where she’ll compete for Team Canada as part of the women’s wrestling team.

Her wrestling coach back in Grade 9 was Sil Sanna, a long-time Sacred Heart teacher, now retired. He remembers Wiebe’s early interest in the sport.

“I think she came with a couple of her friends… we were just introducing the girls wrestling program. I used to run a Grade 7-8 program, but girls couldn’t wrestle then, and she was really keen to try it,” he says. “Later in her career, in Grades 10, 11 an 12, I had a hard time finding guys to wrestle against her because they kept getting beat up by her!”

Sanna says Wiebe was always up for a challenge, often picking the toughest guy on the school’s football team to wrestle against, and usually winning.

“She has a very strong lower body. She’s got thunder legs, they were muscular, being a (soccer) goalie. She was very solid, very good centre of gravity, she took really quick to moves I showed her, and a very quick learner,” he says. “She’s still doing that right now. she’ll practice and move for days and weeks until she perfects it. I know that in her early times in grade 9, because of her weight category, she was wrestling some of the grade 12’s from other schools and she won all the time. That’s how strong she was, and smart too.”

“I am so proud of her. I treat her as a daughter. I’m really proud of my students and my athletes that go on and do something for themselves,” he says. “I’m trying to figure out a way to afford to go down to Rio and watch her. I promised her, once you get to the Olympics if it’s feasible I’ll come down and watch you.” 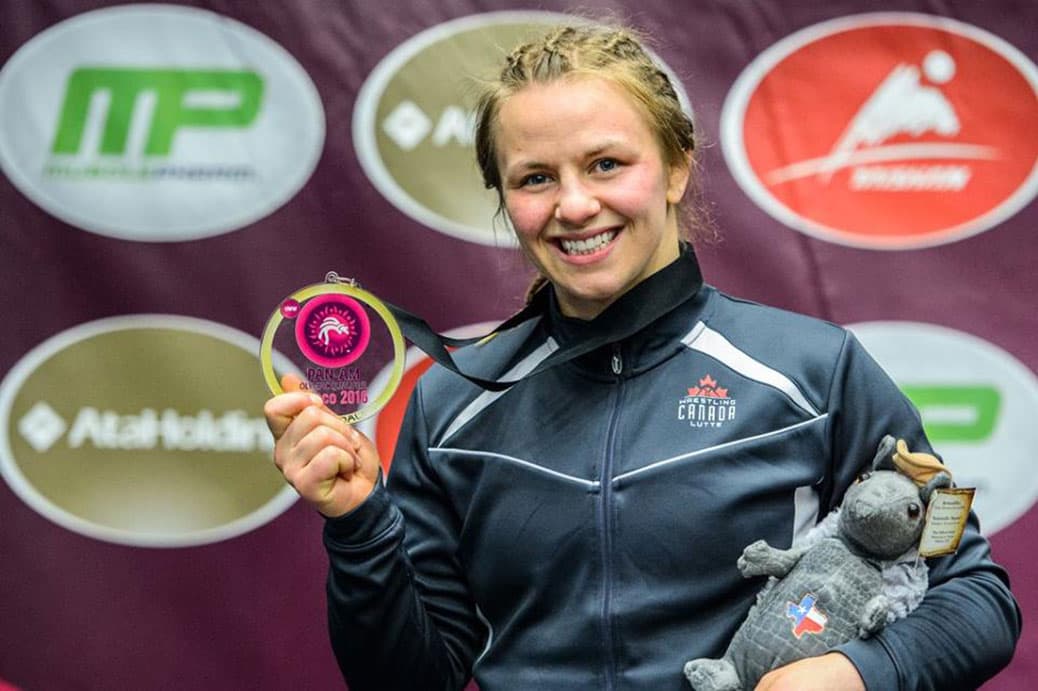 Erica Wiebe celebrates after qualifying for the Olympics at the Pan Am Olympic Qualifier in Fresno, Texas in March. Photo via Erica Wiebe.[/caption]

_ Video: Erica Wiebe is interviewed after qualifying for the Olympics at the Pan Am Olympic Qualifier in Fresno, Texas in March. _

She currently lives in Calgary but her training involves a lot of travel. When we talked to her earlier this month, she was just about to fly to Germany for an international competition, before heading to Sweden for a training camp with their national team. Her visit to Ottawa is part of a two-week tour of Ontario that includes training with the German and American teams in St. Catharines, the Canada Cup competition in Guelph on June 25, and then back to Calgary for intensive training until the Olympics.

“I’m almost really scared for what July has to come. Leading to the Olympic trials last December, our peak phase of training, I trained more intensely than ever before. The phrase was ‘leave no stone un-turned’. In July the intensity and training will increase, and the volume, getting us peaked for the Olympics,” she says.

Wiebe has also become a role model for young wrestlers in Canada - men and women - and stops in at Sacred Heart when she can to run clinics or help with practices. She says women’s wrestling in particular has come a long way since she started as a teenager.

“It’s unbelievable how far it’s come. I saw a bunch of the National Capital athletes in Calgary. Just watching all of Canada’s wrestlers, I was so amazed at the skill level, the talent, the passion that they have at that age. It was inspirational for me. It reminded me why I did it and where it started. I was never as good as those girls at that age that’s for sure!”

_ (this article originally appeared on our sister site, StittsvilleCentral.ca ) _

_ (press release) _ ** JUNE 21, 2016 ** (OTTAWA): Interval House of Ottawa (IHO), the city’s oldest shelter for women and their dependents fleeing violence, is celebrating its 40th anniversary with a barbecue for current and former residents, staff, Board members and volunteers on June 28th. ...