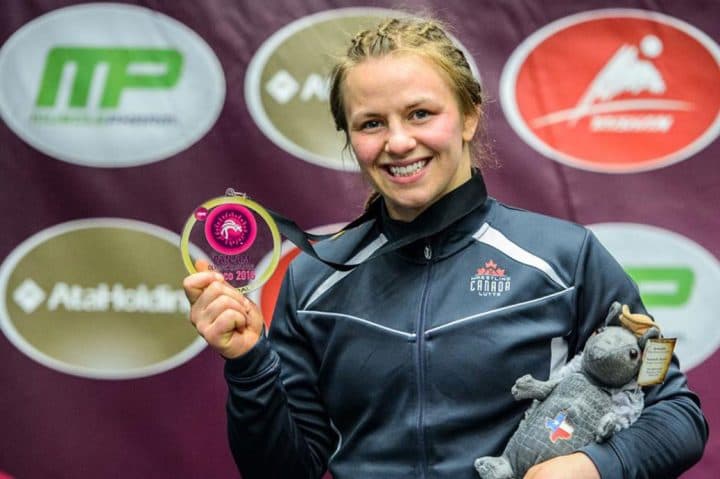 Erica Wiebe celebrates after qualifying for the Olympics at the Pan Am Olympic Qualifier in Fresno, Texas in March. Photo via Erica Wiebe.[/caption] _ (Via Councillor Shad Qadri) _ As announced at her homecoming party on August 25

, the Goulbourn Recreation Complex (GRC) Gymnasium will be undergoing a commemorative naming for Olympic gold-medalist and Stittsville-born Erica Wiebe.

Erica came out on top in the Women’s Freestyle 75-kilogram wrestling category, earning Canada’s fourth, and final gold medal in the Rio Summer Olympics this year.

As the City Councillor of Stittsville, I am thrilled to bestow this honour onto Erica and her family on behalf of the community and would like to invite all residents to share this moment on November 1

from 7:00-8:00 PM. The event will be held at the GRC, 1500 Shea Rd, right beside Sacred Heart High School where Erica spent the formative years of her life developing her love of wrestling. The gym is a second home to many impressionable future Olympians.

_ (press release) _ ** OTTAWA-GATINEAU ** - The Ottawa Sports and Entertainment Group (OSEG) today announced that former Ottawa Mayor, Jim Durrell, will Chair Ottawa’s 2017 Grey Cup Festival. The Grey Cup Festival 2017 is a series of events and activities that take place during the week prior to the Grey Cup game. ...