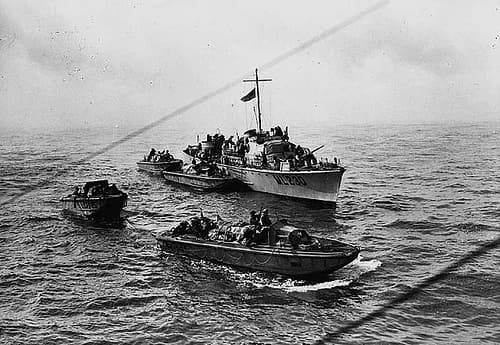 The official Ottawa ceremony to mark 75 years since the Dieppe Raid will take place on Tuesday, rather than the actual anniversary on Saturday.

A Canadian delegation traveled to France on Thursday and will take part in commemorations there, returning on Sunday.

The Ottawa ceremony will be held at the National War Memorial on Tuesday. The time hasn’t been set and will be announced on Monday, Veterans Affairs told _ OttawaStart.com _ .

(Here’s a column from Tyler Dawson at the Ottawa Citizen about why Ottawa deserves a commemoration on the actual anniversary .)

A new exhibit at the Canadian War Museum will mark the 75th anniversary of the battle:

_ Dieppe _ consists of photographs, personal letters and artifacts exploring the danger and drama of the raid and its aftermath, including the difficult road to recovery for the wounded, and the isolation, undernourishment and boredom suffered by prisoners of war. The display’s centrepiece is a Churchill tank like those used in the landing. The display highlights the stories of Canadians such as John Dermody, who escaped death when a German bullet hit a spoon in his back pocket, and fighter pilot George Hill, who shot down his first enemy aircraft at Dieppe and went on to become a flying ace.

The museum also announced this week a new exhibit to commemorate the 1917 battle for Hill 70, which is open until Remembrance Day.

CTV Ottawa will double its local news efforts starting later this month with a new 5 p.m. newscast, in addition to its existing evening show. The new show, _ News at Five _ , will launch on Aug. 28 with Matt Skube at the helm, Bell Media announced in a news release Thursday. ...