_ (Via Ottawa REDBLACKS) _ ** OTTAWA, ON ** - The euphoria and thrills of the Panda Game presented by Air Canada, return to TD Place on October 1st as the Carleton University Ravens and University of Ottawa Gee-Gees football teams clash in what promises to be another memorable afternoon between these two CIS rivals. Tickets for the 2016 Panda Game go on sale August 25th at 10:00 a.m. at TDPlace.ca , by calling 613.232.6767 X1 or in person at The Box Office at TD Place. 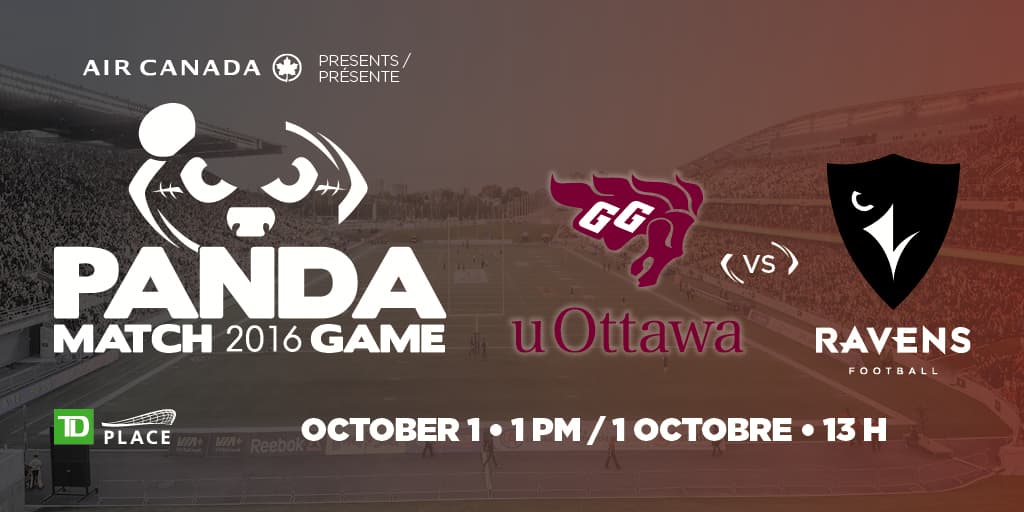 “I can’t think of a better atmosphere for a Canadian university sporting event than what we’ve seen here at TD Place these last two years for the Panda Game,” said MikeCerha, VPEntertainment and Venues at TD Place. “From the Hail Mary touchdown in 2014 to the double-overtime game last year – I can’t wait to see what the 2016 Panda Game has in store for the students, alumni and fans.”

The first Panda Game was played at Lansdowne Park in 1955 and continued annually until the 1998 season. The Ravens returned to the gridiron in 2013 and the Panda Game returned to Lansdowne in 2014. That edition saw Carleton win their first Panda Game since 1994 thanks to an incredible ‘Hail Mary’ at TD Place. Last season the Ravens edged the Gee-Gees in a double-overtime thriller, 48-45, which was the highest scoring result in Panda Game history. The Gee-Gees own the all-time series with a record of 33-14 (Ravens are 2-1 since their return in 2013).

With almost 13,000 in attendance for the return of the Panda Game to TD Place in 2014, last year’s edition saw the crowd jump to over 17,000 – the largest crowd at a regular season CIS game last season.

“Panda is a such a special game in Ottawa with its rich tradition and national appeal, it makes for one of the highlights of the fall football schedule,” said Ravens head coach Steve Sumarah. “The crowds continue to grow and the support from the two universities and the local community is second to none, making it a can’t miss event!”

Carleton opens their 2016 OUA campaign August 28th at McMaster before hosting Western on their September 4th home opener. The Gee-Gees travel to Waterloo to open their season September 5th and host McMaster for their home opener on September 10th. ** _ About TD Place _ ** Located in the heart of the city, the arena and stadium at TD Place form the centerpiece of Ottawa/Gatineau’s newest urban lifestyle district, Lansdowne. The stadium seats 24,000 for live sports and 30,000 for concerts. The arena seats up to 10,000 for live sports and can be configured for intimate theatre style concerts for between 2,000 and 7,000 fans. Ottawa’s exciting downtown sports and entertainment destination is surrounded by restaurants, shops, services and excitement. For more information and events listings visit the TD Place website and follow TD Place on Twitter @TD_Place and Instagram @TDPlace

_ (Via REDBLACKS) _ ** OTTAWA-GATINEAU ** - The Ottawa REDBLACKS host the BC Lions Thursday night at TD Place for the annual Canadian Forces Appreciate Night. Less than 1,000 tickets remain for Thursday’s game that will feature a fly-past by a CF-18 jet on two occasions prior to the game. ...

_ (Via Government of Canada) _ The governments of Canada and Ontario, as well as municipalities across Ontario are making investments that will help create jobs and grow the middle class now while building a strong foundation for a sustainable economic future. ...