The plan has no dependence upon government subsidies, public debt, or taxes. It will increase the region’s sustainability, and will provide additional convenient, low-cost, low- carbon transport options for urban, suburban and rural populations.

Founded in 2015, Moose Consortium’s name is a bilingual acronym for “Mobility Ottawa- Outaouais: Systems & Enterprises” and “Mobilité Outaouais-Ottawa : Systèmes & entreprises”. Member firms include one of the region’s most respected civil engineering companies, REMISZ Consulting Engineers, as well as MTBA Architects which has long been one of the most prominent Architecture, Urbanism & Conservation firms in the Capital.

Moose plans to link urban and rural sectors of both eastern Ontario and west Quebec, using existing railway corridors and bridges. Its train service will exchange passengers with Ottawa’s new Light Rail Transit (LRT) system at Bayview Station in Lebreton Flats, and at the Tremblay Road VIA station. It will also connect with Gatineau’s Rapibus service. 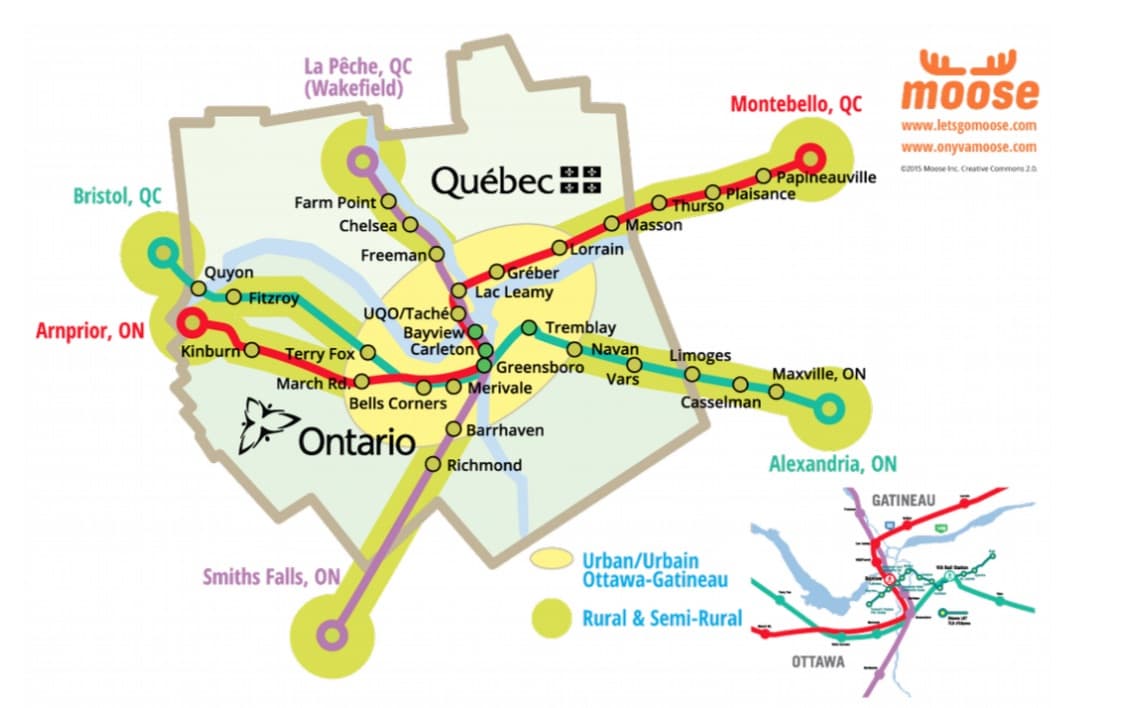 “Our plan involves operating three-coach, double decker diesel-electric passenger trains with hourly service every day, through Ottawa and Gatineau, and extending out to six rural towns,” said Scott Ivay, who has over 15 years of diverse experience in train operations and management. Ivay’s company, which is part of Moose Consortium, has drafted initial plans for overnight train maintenance in the rural Ontario towns of Smiths Falls, Alexandria, and Arnprior, and in the rural Quebec towns of Chelsea, Papineauville and Bristol. Major train maintenance work will be carried out centrally at an industrial park in either Ottawa or Gatineau.

The Moose rail service will cross the Ottawa River on the historic Prince of Wales Bridge located between Lebreton Flats and the University of Québec en Outaouais (UQO) campus. Wojciech Remisz, President of REMISZ Consulting Engineers said: “We have now formally submitted Moose’s $50M plan to retrofit the bridge between Ottawa and Gatineau. In addition to the repairs and upgrades required to restart railway operations, this will include the addition of a new cycling pathway cantilevered off the upstream side, and a pedestrian walkway on the downstream side, with picnic areas on Lemieux Island, offering a direct view of Parliament Hill.”

Moose Consortium estimates operations will achieve 20,000 tonnes of net CO2 reduction per year for the region, and remove 25,000 cars per day from downtown traffic. The group calculates that their service will enable households to redirect $20M annually from transportation spending to other needs, and will directly create hundreds of new permanent full-time skilled jobs in both urban and rural areas of the Region.

Commercially financed, developed and operated, Moose will be Canada’s first and only private sector metropolitan-scale rail transit system established in at least 100 years, and one of few in the world. The company’s application for development authorization is being submitted to the federal government on a date of great symbolism: the 125th Anniversary of the start of the Ottawa Electric Street Railway Company on 29 June 1891. Ottawa’s original railway transit system was similarly initiated, planned, financed, developed and managed entirely by commercial firms, and based on private sector investment.

Moose’s Director General, Joseph Potvin explained: “All the infrastructure and operational financing will be based upon the value added to property income and capital near stations. Each station will be owned, developed and operated as an autonomous enterprise under common regulation and monitoring.”

The group’s financing plan is based on a highly innovative approach to metropolitan-scale railway financing call the “Property-Powered Rail: Open Market Development Model”. A station will be provided train service in exchange for a “train stopping fee” based on a standardized formula. There can be a variety of profit-based and not-for-profit arrangements by which property investors wanting to develop stations can pool part of their financial gains arising from the train service.

Professor of Project Management at University of Québec en Outaouais in Gatineau, Dr. Stéphane Gagnon, commented: “It will very helpful to have the UQO, Carleton and Ottawa university campuses all connected to the entire region by rail. Students will benefit immensely from regional train service. They will have more housing options, and can get to jobs and recreational sites without a car. But I also think they’ll really be intrigued by the fact that this initiative diversifies our vision of transit by reinventing how it can be financed.”

“Moose rail involves some business model innovation, but ultimately this is just a straight fee- for-service model implemented at the station level”, Potvin pointed out. “No government funding is required. Instead, Moose will generate new municipal, provincial and federal revenues and savings.”

Once the Consortium obtains federal authorization to proceed with development, it will initiate formal negotiations for the use of rail corridors from VIA Rail, several freight companies, and the cities of Ottawa and Gatineau, as well as some of the smaller municipalities that own sections of the existing railways. Federal law provides a way through the complexities of different provincial and municipal jurisdictions.

The Canadian Transportation Agency generally attempts to reach its decisions within three- months, so Moose expects to have this authorization in hand by the end of September 2016. Member companies of Moose are encouraging the regulator to take into account the environmental benefits, the public interest and the economic advantages for the Greater National Capital Region.

The National Capital Commission has released its draft 50-year plan for the capital. _ Plan for Canada’s Capital, 2017–2067 _ lays out a wide-ranging vision for the future of Canada’s capital region. It includes 17 milestone projects: 1. An Indigenous welcome centre on Victoria Island. ...

The BBC’s Linda Pressley reports on a local supportive housing centre, The Oaks, which is using a unique addiction treatment for alcoholics. Listen to the full piece on the BBC World Service here…