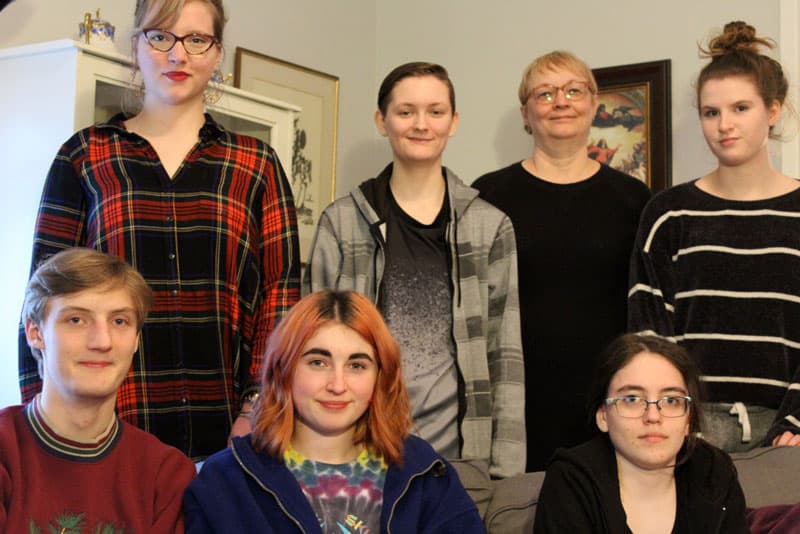 As someone who for 15 years has been active on the front lines of ending violence against women, the Governor General’s Award-winning advocate, who frequently appears in the national media as a go-to person for her expertise on such violence, shared important lessons with members of the teenaged youth troupe.

Lalonde chronicled a remarkable history that included leading a seven-year effort to establish the first sexual assault centre at Carleton University. It was an uphill battle, she recalled, because the administration refused to recognize the extent of rape culture on campus, claiming that to acknowledge the problem might hurt the school’s reputation znd discourage prospective students.

In response, Lalonde and a group of like-minded colleagues wrote petitions, held a town hall where the need to provide such a service was made obvious, and started an 18-hour-a-day support line that existed for years as the political struggle went on. While Carleton brought in a football team and built a new arena, it always claimed there was no funding available for a sexual assault centre.

“We heard horrible stories,” Lalonde says, often from women who had never before had their experiences framed within the context of naming the violence done to them as sexual assault. “We were hearing stories like ‘my abuser goes to the same class, what do I do?’ and “my teaching assistant is abusing me.’” In the era before Facebook and Twitter, the group got the word out about their hotline by placing flyers on car windshields and putting up posters at 4 am that were quickly taken down by staff. Each individual staffed the phone for four-hour shifts, 365 days a year.

The tireless Lalonde has also worked for seven years on a provincial campaign to end violence against women, training over 10,000 people while speaking in different communities some 200 days of the year. She has also, unfortunately, been the focus of repeated internet trolling and harassment, including death threats, many of which amplified after she spoke to cadets at the Royal Military College on recognizing and ending such violence. For a number of years afterward, she could not speak publicly without a police presence, which she said was supremely ironic given the national “awakening” then unfolding on sexual violence in light of allegations brought forward by a group of women against former CBC broadcaster Jian Ghomeshi.

Lalonde has also played a key role in working to improve safety for riders of OC Transpo while also shepherding a group called Hollaback Ottawa, which challenges street-level catcalls and harassment. A lot of people have yet to come to the terms with the fact that, she says, “social media is the new sidewalk,” a place where women are still not free to exist in a violence-free space.

While she garnered a national profile as a leading fighter against such violence, Lalonde says she was dealing with her own personal nightmare, being “brutally stalked” by a former boyfriend for over a decade. “I would be on the news talking about these issues, but I couldn’t talk about what was going on in my own life because it just wasn’t safe,” she says. The man who stalked her died in a car accident, but the damage he did – including Lalonde’s post-traumatic stress – remains, as documented in a new video she created with Montreal artist Ambivalently Yours, Outside of the Shadows (https://outsideoftheshadows.ca/).

Reflecting on the #MeToo movement, Lalonde says “If we’re waiting for survivors to just come forward, it won’t happen. We need to create the conditions for it to be safe enough to come forward. You have the right to decide if and when you tell your story.” She also rejects the Hollywood notion that simply telling one’s story of abuse will result in healing.

“There’s no guarantees, so as a counselor, I have often asked, ‘What does healing look like to you?’ The answer does not always come easily or clearly because most people do not know what options exist outside of calling the police or going to the hospital.”

Lalonde views the Burning Passions Theatre play, Every Friday, as an opportunity to continue spreading the word not only about the issue, but also the resources that, limited though they may be, are available in Lanark County.

Every Friday plays in Perth on Tuesday April 17 at 5pm at YAK (1 Sherbrooke Street East), at the Mississippi Mills Youth Centre (134 Main Street East) on Thursday April 19 at 5pm, at Lanark Community Youth Centre (61 Princess Street) on Friday April 20 at 6pm, and at the Smiths Falls Community Centre (71 Cornelia Street) on Friday April 27 at 4:30pm. Admission is by donation, with no one turned away for lack of funds.

_ (press release) _ Do you love writing short fiction? Are you 50 years old or more? Then put pen to paper or fire up your keyboard: the Ottawa Public Library’s annual 50+ Short Story Contest starts Monday, April 2 and runs until May 31. ...

When OttawaStart.com was born a little over 19 years ago, in September 1998, we were nothing more than a gateway to the world wide web. From a simple collection of links in the ’90s and early 2000s, to a top destination for news and information about Ottawa in more recent years, we’ve been changing a lot to serve our readers better. ...