Li, a 21-year old Boston native, was a silver medallist at the 2015 Tchaikovsky competition. That feat secured his rapid graduation to the front of the current pack of young virtuosos, with an increasingly full calendar of prestigious international concerts. Tuesday night’s audience can proudly claim “they heard him when.” 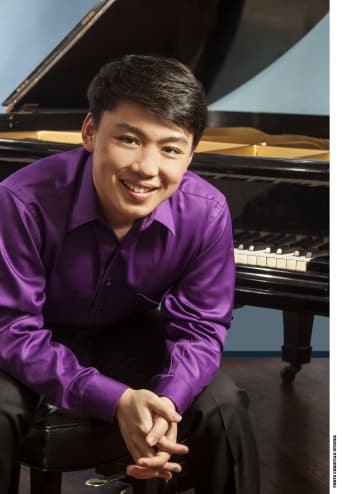 Li performed on Southminster’s vintage Heintzman grand . The instrument’s extensive refurbishment was recently completed, and it sounds lovely. Even the problematic, dead-ish middle register is now vastly improved. Still, it will always remain an older piano with quirks, chiefly its tendency to bottom out. Unlike robust modern pianos, built to withstand ground-shaking _

_ with ease, you can only play this beast so loud before it loses all richness and power.

This was a bit problematic for Li, whose motto seems to be the not-quite-Olympian “faster, louder, deeper.” He is, as advertised, a stupendous technician, with dazzling speed, clarity, consistency and precision. His sound is huge, bright, and not unpleasantly dry.  He’s also an interesting, even original musician; even if you don’t always agree with his choices, at least he’s expressing some conviction and individuality, unlike so many cookie-cutter young artists.

In the first half, Li played Haydn like Beethoven and Beethoven like Schumann. The former was more successful. The angularity and drama of Haydn’s B minor Sonata (Hob. XVI:32 if you keep track) lent itself remarkably well to Li’s bold, assertive approach. But the Beethoven rushed headlong like a backcountry foxhunt, all forward momentum with no breath, grace, or apparent plan. Li’s cocky tempo in the second movement flirted with bad taste: just because you can doesn’t mean you should (unless you’re Cziffra. Because Cziffra). This was showy speed for speed’s sake, not at the service of the ink on the page.

After the intermission, Li’s self-assured chops, control and massive sound impressed in Rachmaninoff’s _

_ . However, the piece’s grand narrative arc wasn’t well defined—it was just one variation after another— and I would have liked to hear some of Rachmaninoff’s beautiful voice-leading more distinctly.

It was the two Liszt compositions ending the program that really drove home why Li’s pianism deserved a Moscow medal and all the ensuing hype. The _

_ was played with aching, mature sensibility, seamless legato and an exquisite tonal palette. The second _

_ predictably brought the house down with its barn-burning tempo (if there’s a piece in which more is better, this is it),  Magyar panache, and spectacular hammered dulcimer effects.

The vociferously appreciative audience was rewarded with two encores. Li gave them Liszt’s transcription of Schumann’s _

_ a Horowitz fave, which sparkled like a jar full of fireflies.

If you’ve read my reviews, you know I’m not a fan of exaggerated, superfluous emoting at the keyboard. While Li isn’t imitative in his interpretations, he seems to be emulating the worst physical excesses of the Lang Lang school: the heavenward gaze, the conspicuous, affected left-hand conducting, the theatrical endings—head drooping, eyes squeezed shut in apparent ecstasy, hands slipping off the keyboard in drawn-out slow motion. It smacks of _

_ and is all the more irritating because Li doesn’t need any of it. He’s a much better pianist than that.

Ottawa paramedics had a busy night Friday, with over a dozen overdose calls in less than 10 hours, and Sunday night is expected to be no different. Bars across the city will be packed, on top of countless house parties, for Super Bowl Sunday - a night that reliably results in a spike in calls related to drug and alcohol abuse. ...

_ ** Editor’s note: A road rage incident caught on camera last month has resulted in charges against a Gatineau driver. The case was widely publicized, with the video shared across social media for several days. ** _ https://twitter.com/CFRAKristy/status/820608517316968448 _ (Via Ottawa Police) _ (Ottawa) -The Ottawa Police Service Central Investigations Unit has charged a driver involved in a road rage incident with a cyclist on January 11, 2017 at approx. ...