Gina Hedges, a Stittsville resident who is living with polycystic kidney disease, is searching for a living kidney donor. (via Gina Hedges)

Gina Hedges was 25 when her mother, Carol, found out that she had a rare kidney disease and was in need of a donor.

Wanting to help, Hedges and her sister both got tests to see if they would be compatible donors. But instead, they found out they also had the disease — polycystic kidney disease — which is where cysts grow on their kidneys and slowly reduce their function.

Needless to say, it was a lot to handle for Hedges and her sister.

“For one, we had never heard of PKD even though it is a genetic disease and goes through families,” Hedges said. “To be diagnosed with that in my 20s… (it was like) ‘OK, this changes everything’.”

Carol did end up receiving a kidney donation around Thanksgiving in 1996, which worked. Unfortunately she died two weeks before Christmas that year due to a cardiac arrest.

Since her diagnosis, Hedges has had plenty of time to process it as she moved throughout her adult life.

Now at age 49, Hedges has been told time is ticking and she will need to find a living donor to receive a kidney transplant before the disease progresses to a life-threatening stage.

“I guess it’s almost (been) two months now, my doctor said that… I need to start looking for a living donor,” she said. It needs to be a living donor because the waiting list for deceased donors is five to seven years, she said.

A transplant would stop cysts from growing on her kidneys, she said. The task for searching is all on her, which is understandably stressful because she is not sure where to start.

“I have family members who are just too old to be a donor,” she said with a giggle, explaining why she must turn to total strangers in the hopes someone will be willing to part with one of their kidneys.

“I have a little bit of time… but probably next year I’ll need it,” she said.

PKD is a slow moving but serious disease, which has affected Hedges greatly in her life. Before being diagnosed, Hedges was a dancer (these days, she’s a massage therapist). But because the disease enlarges her kidneys and liver, she is now unable to do strenuous activity because her organs don’t have room for movement and she gets out of breathe easily. As well, she looks pregnant — “about six months, I’d say,” she observes with a laugh.

When she was diagnosed, doctors told Hedges there was a 50/50 chance she would transmit the disease to any children she may have. “So I never did have children,” Hedges said.

Although the disease is obscure, it is a leading form of kidney disease and approximately one out of 500 people have it, Hedges said. As the Ottawa Chapter coordinator for the PKD Foundation of Canada, she helps raise money and awareness through the annual Walk to End PKD, this year’s edition of which was held at Andrew Haydon Park in Nepean on Sept. 15 (they raised $12,000). 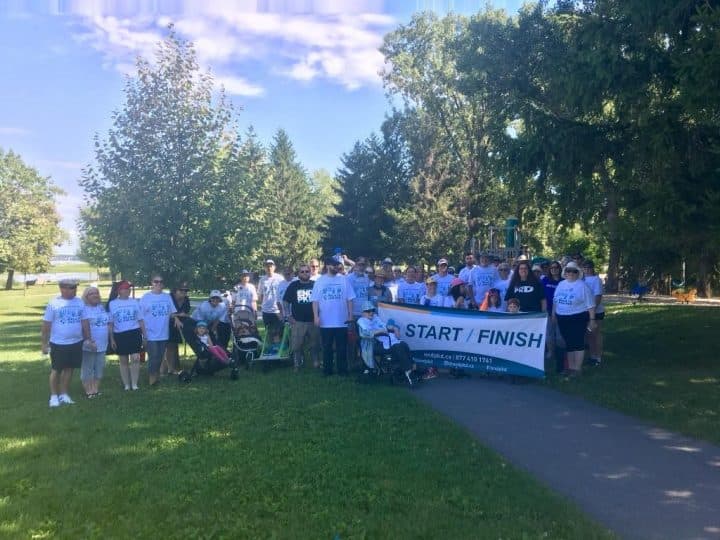 The Ottawa Walk to end PKD takes place in Andrew Haydon Park each year and consists of a 5 kilometre walk. This year it raised $12,000 for cure research. (via Gina Hedges)

“The main message I would like to put out there is for one just to educate people (about PKD)… two, to think about organ donation,” she said. “To have a five to seven year wait for people that are really sick… is way to long.”

You can register to be a donor after death, or check if you already are, at beadonor.ca.

Anyone wishing to see if they are eligible to donate one of their kidneys to Gina Hedges can call the Ottawa Hospital Living Donor Program at (613) 738-8400 ext. 82778.

This story was originally published on our sister site, StittsvilleCentral.ca.

The City of Ottawa election is on Oct. 22. Voters will elect a mayor, city councillors and school board trustees. You can find out where your polling location is on the city’s elections web page. Most polls are open from 10 a. ...

The Ottawa municipal election is on Monday, Oct. 22. Here is a roundup of candidate Q&As and debates. Please send additions to feedback@ottawastart.com Debates Rogers TV has recorded debates for mayoral candidates and all wards. Here’s a list of videos… Rideau River Residence Association mayoral debate - Sept. ...