The Spring 2014 BBM radio ratings are out. I put all the numbers into Excel and created some graphs to try to find some trends.  Did the new Jump 106.9 affect Hot or Kiss?  Where did The Bear’s listeners go?

(For all of the graphs below, I’ve ranked each station by their share, defined as “the estimated total hours tuned to that station expressed as a percentage of total hours tuned to all radio”. These numbers include all listeners ages 12 and up, Monday to Sunday from 5:00am to 1:00am, measured between  March 3 and April 27. ( Full data is available here from BBM (PDF), and you can find previous charts on our blog under the keyword " radio “.)

Here’s a summary of all stations, English and French, by share of English-speaking listeners.  CBC still dominates in the top spot.  CFRA and Hot have swap places since the fall ratings .  CHEZ and County 101 switch spots too.  Live and Kiss leapfrog ahead of CBC Radio 2, and TSN 1200 rounds out the top 10 in place of The Bear. 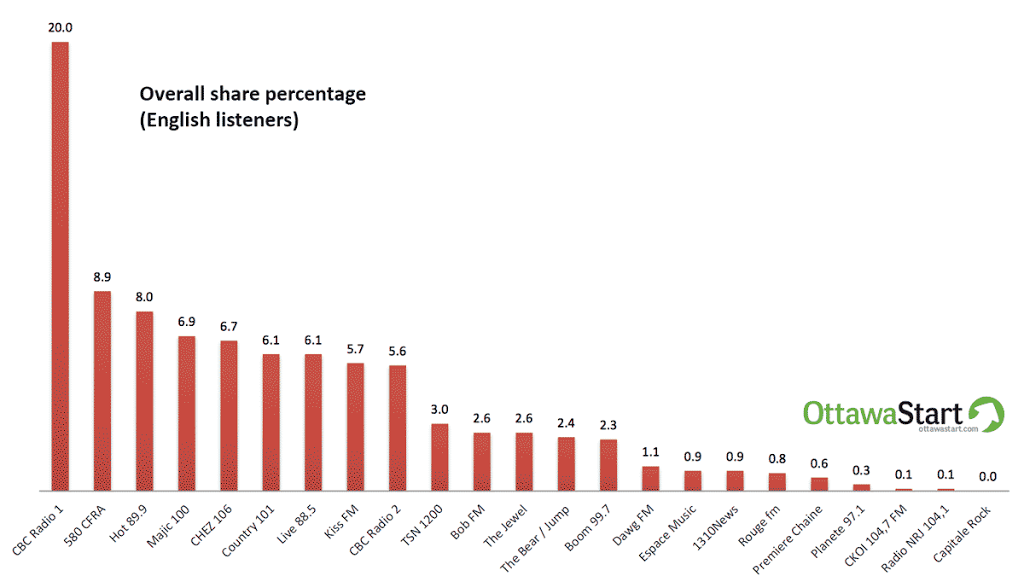 This next chart compares English-language stations over the three most recent ratings periods. The folks at Rogers must be pleased, with three stations in the top ten (CHEZ, Country 101, Kiss FM) 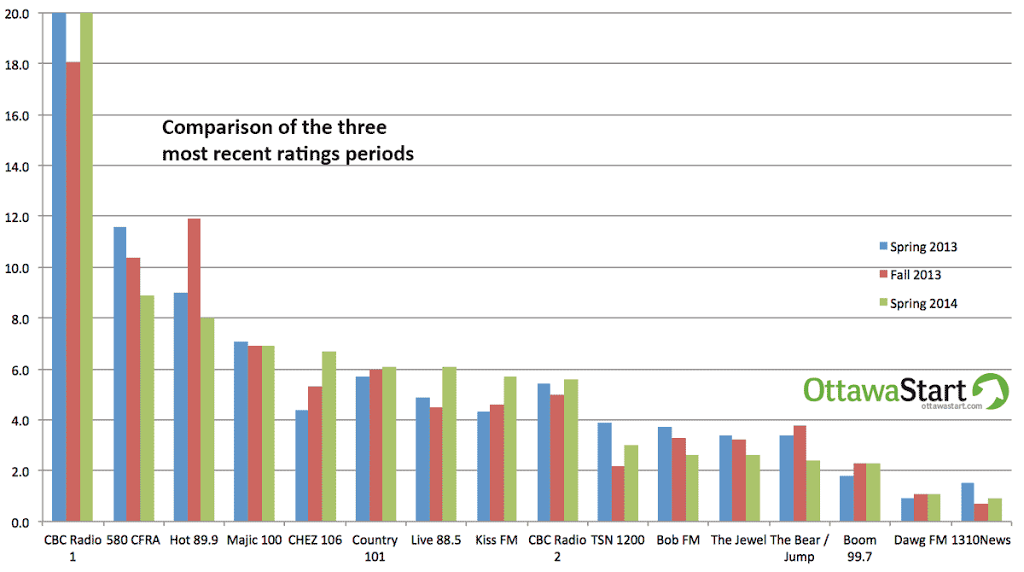 So what effect did the format change at 106.9fm have? It’s hard to say for sure, since the ratings period covered March and April.  The Bear 106.9 stopped being “The Bear” near the start of March, but didn’t actually change over to Top 40 music until March 31.

I bet they were celebrating at CHEZ and Live today.  Both stations made big jumps, probably thanks to migrating Bear listeners. CHEZ and Live combined increased their shares by 3 points this spring – almost equal to the 3.8 ratings share that The Bear had in the fall.   Live’s 6.1 is their highest share in at least two years, and CHEZ hasn’t had ratings that high since 2012.  (Dawg remained unchanged since the fall.) 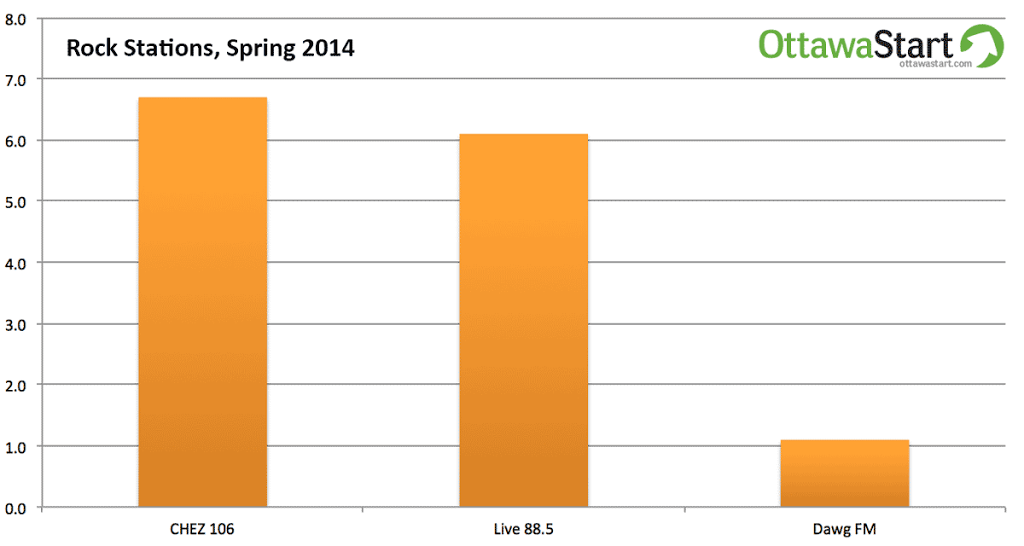 Did the arrival of Jump affect Ottawa’s hit music stations?  Hot fell from 11.9 to a 8.0 since the fall, a drop of 3.9 points. Kiss went up by 1.1, and Majic stayed about the same.   Keep in mind Jump was only operating for about half of the ratings period – but if you add the Jump share to the Kiss increase, it equals 3.5 – almost the same as what Hot lost.  Again, the data’s not here to “prove” that’s why Hot’s share went down, but the numbers are suggestive. 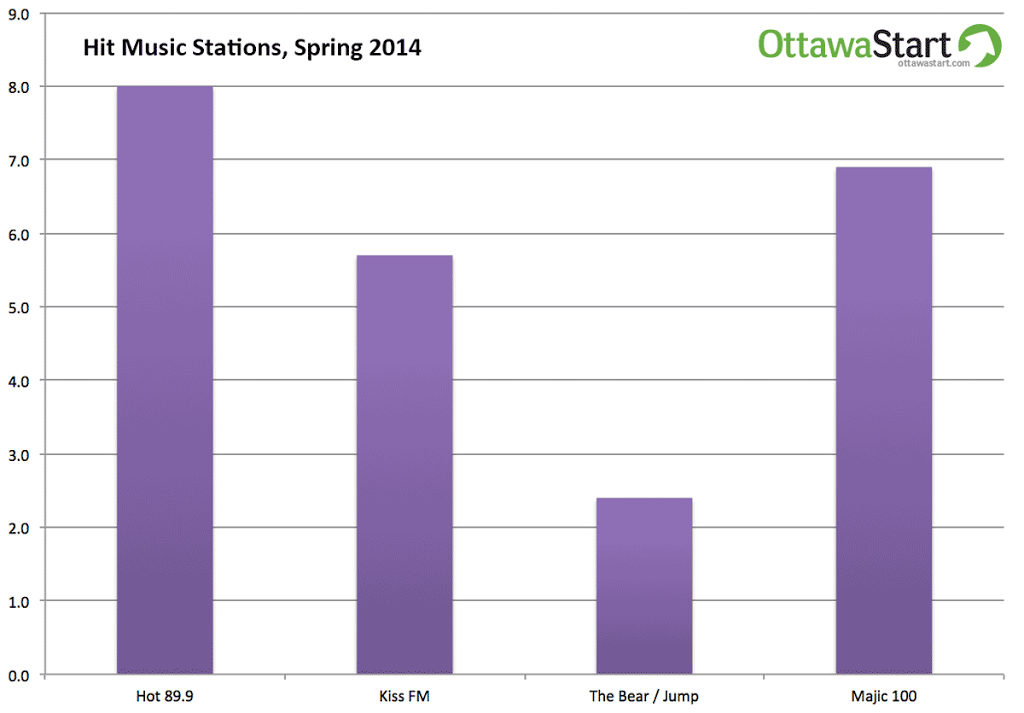 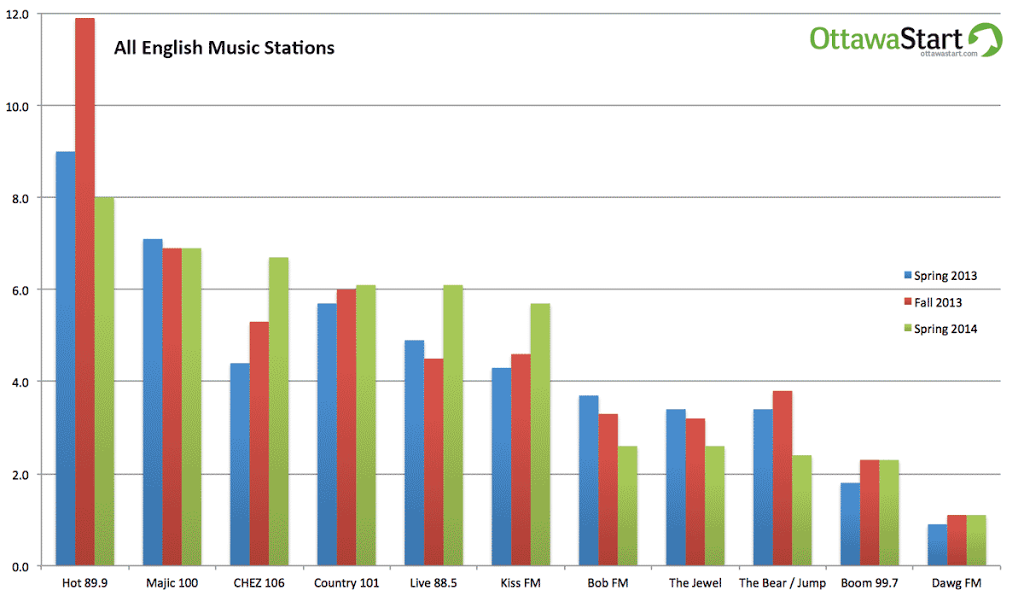 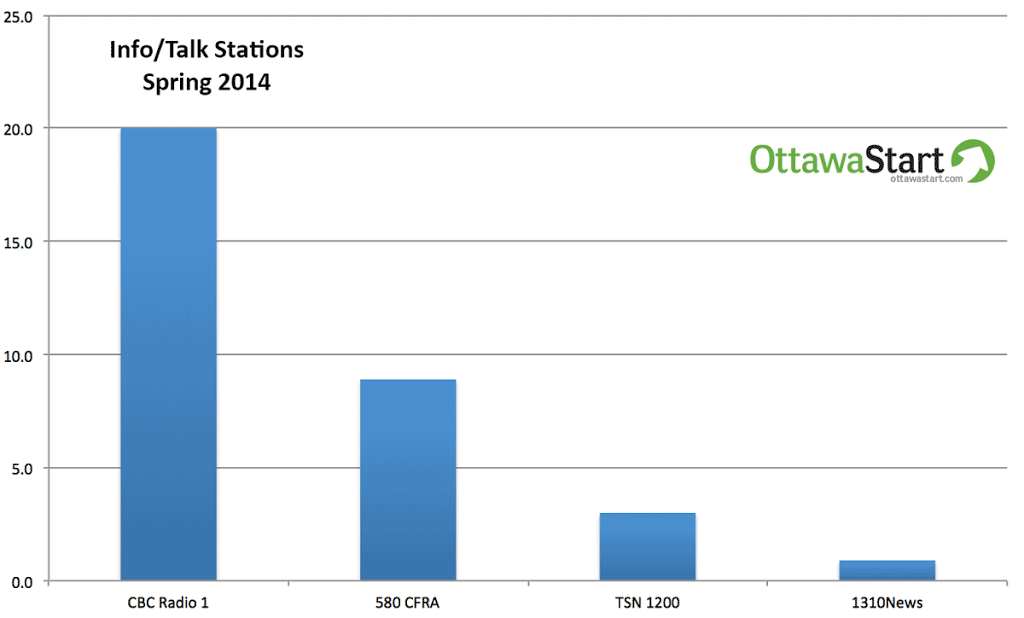 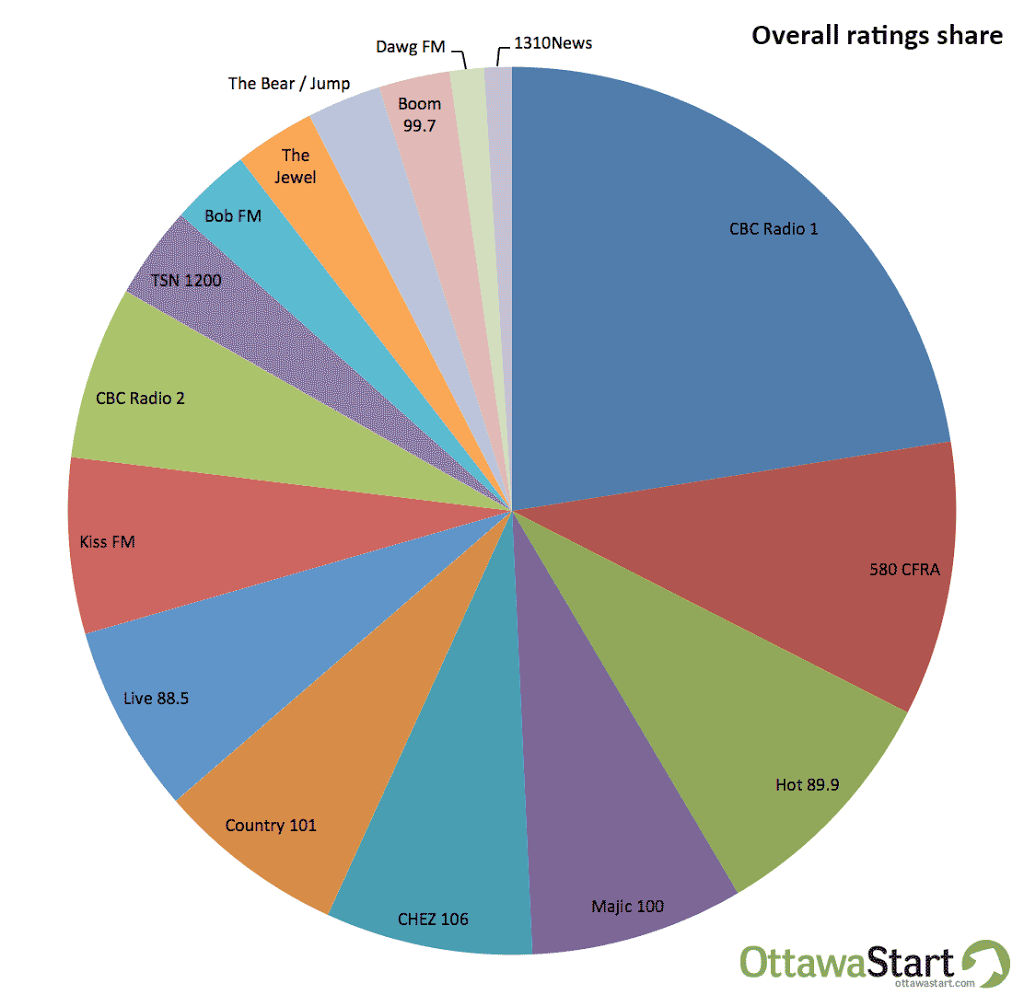 …but what if we take out CBC Radio 1 and CBC Radio 2?  All of a sudden the distribution looks a lot more equal. 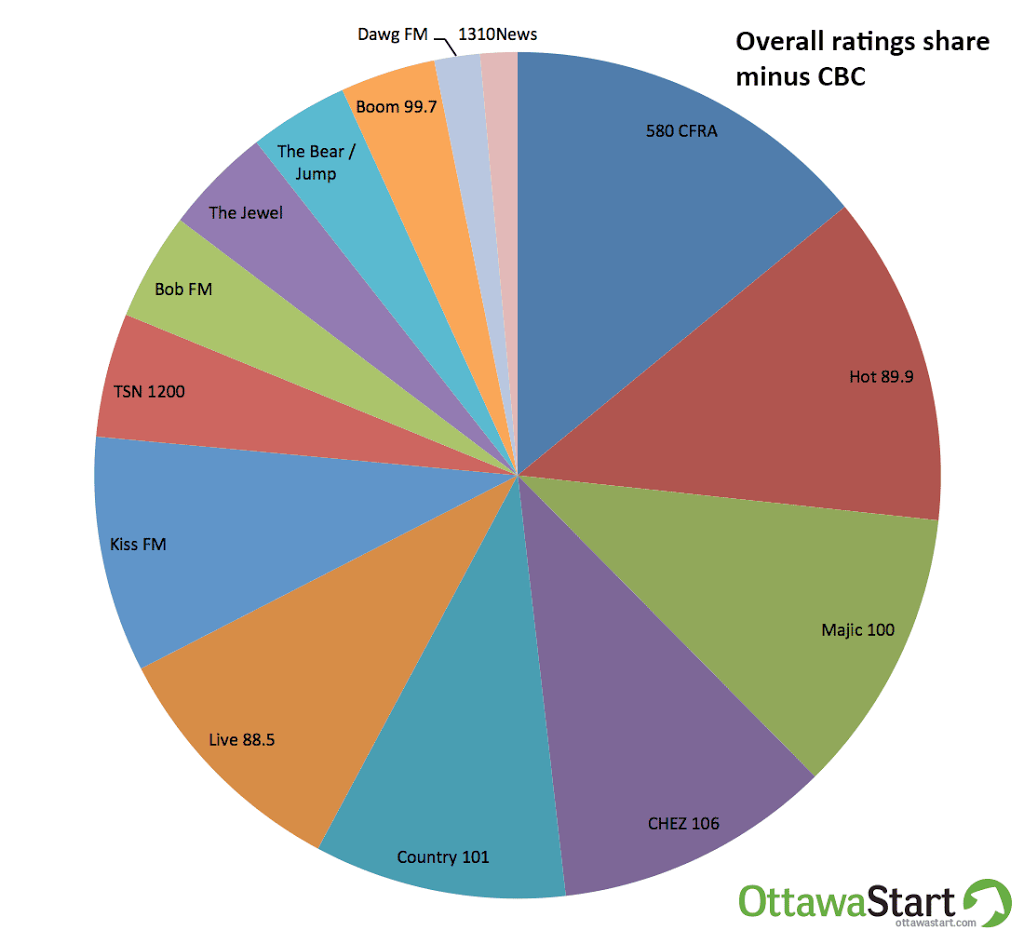 The top five stations in Ottawa command over 50% of the share. 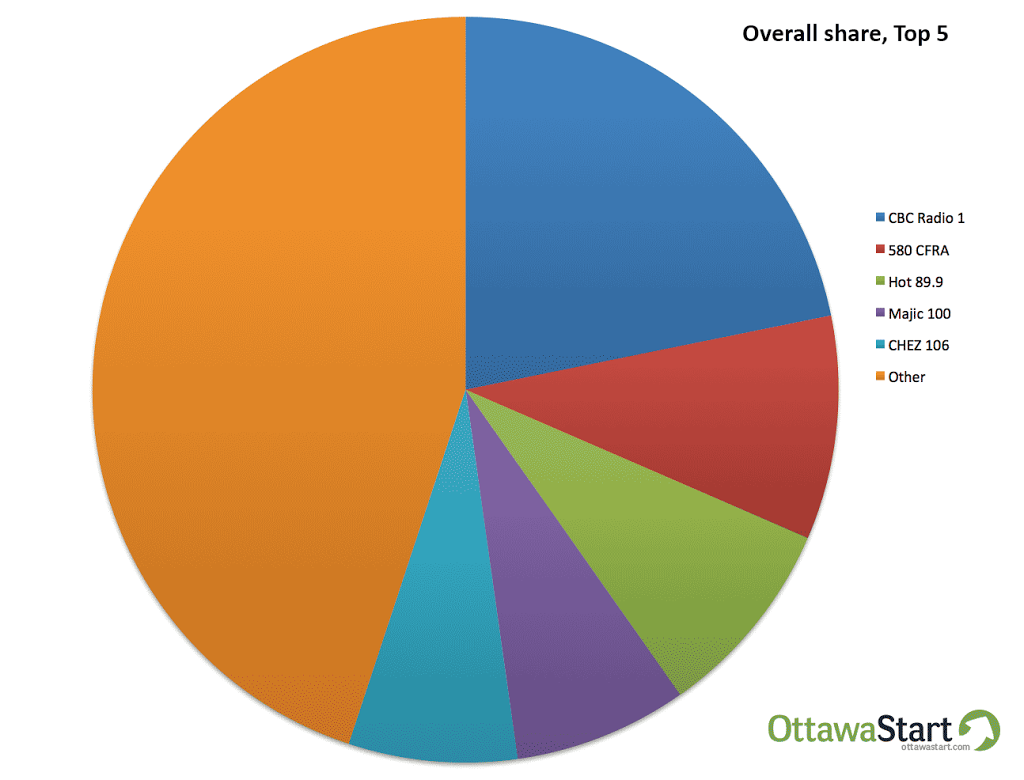 This chart shows some general trends of gains and losses.  The top 5 gains and the top 5 losses in share between Spring 2012 and Spring 2014 are charted. 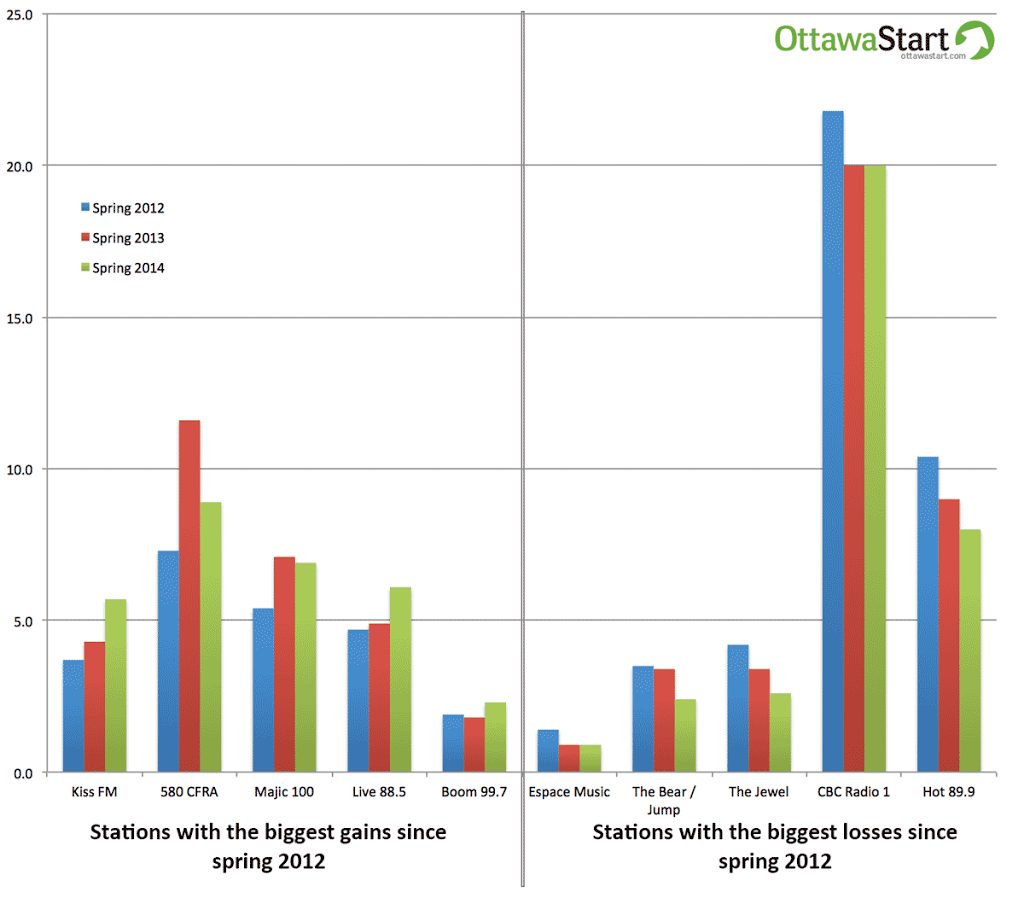 Finally, here’s the overall share for French listeners. Hot 89.9 – an English station – is number five on this list, beating out two other french stations!  Perhaps they should re-brand as Chaud 89,9? 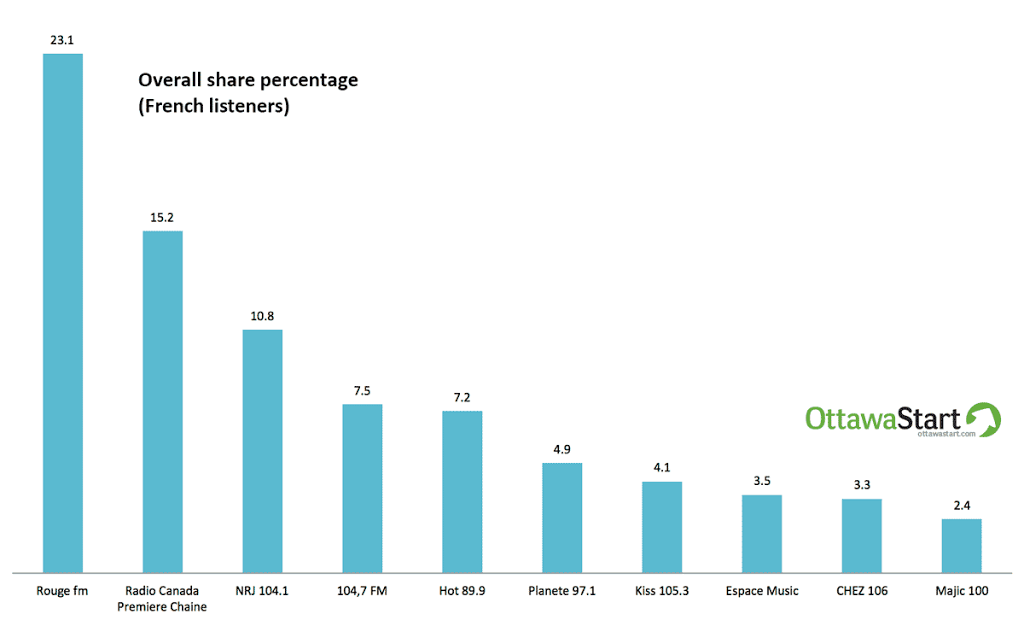 [ ](http://ottawastart.com/wp-content/uploads/2014/06/lolProfile.jpg) Every week we publish a link to the Lunch Out Loud podcast, a weekly show produced by Nick Bachusky and co-hosted by Andrew Miller. This week we join up with Matias from Ottawa Showbox to discuss all major music festivals in Ottawa during the summer. ...

[ ](http://ottawastart.com/wp-content/uploads/2014/05/double-running.jpg) _ Guest blogger Brian Double is training for a 100km from Ottawa to Montebello this fall. He’ll be checking in from time to time with udpates on his progress. You can read previous entries here. _ On October 4th, I’m going to run 100 km from Ottawa to Montebello to raise money to End Kids Cancer . ...