Bishop and Musselwhite’s careers have run parallel for nearly 50 years; towering figures in the Chicago blues scene of the 1960s, each man was barely into his 20s when they began making national waves. A native-Chicagoan, Bishop was a charter member of the Paul Butterfield Blues Band (with whom he was inducted into the Rock & Roll Hall of Fame in 2015), contributing soulful, rollicking licks with his trademark “Red Dog” Gibson guitar to a series of landmark LPs that defined the blues-rock sound and presaged the psychedelic era. As a solo artist he’s released over 20 albums, and his 1975 smash hit _ Fooled Around and Fell in Love _ has remained a radio staple, being featured most recently on the soundtrack of the film _ Guardians of the Galaxy _ . 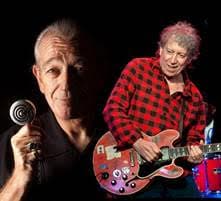 Musselwhite’s biography, meanwhile, needs only rhyme and the wail of his signature harmonica to be a classic blues tune. Born in Mississippi and raised in Memphis, Musselwhite supported himself as a teen by digging ditches and running moonshine out of a 1950 Lincoln. He found himself in Chicago seeking factory work before meeting up with South Side legends Muddy Waters, Buddy Guy and Detroit’s John Lee Hooker. Musselwhite’s debut, _ Stand Back! Here Comes Charley Musselwhite’s Southside Band _ , was an electrifying bridge between blues and rock ’n’ roll, and Musselwhite himself became an icon; legend has it his distinctive look and attitude inspired the harmonica-slinging Elwood Blues (Dan Aykroyd) of _ The Blues Brothers _ .

Opening for the duo, Grammy-winner Alvin “Youngblood” Hart is one of the most acclaimed country blues guitarists of the past twenty years, bearer of a torch passed down from the likes of Lead Belly and Spade Cooley. With his Muscle Theory trio, Hart uncorks a raunchy electric tone worthy of Ronnie Montrose, bringing a festival-sized stomp part roots, part rock and all blues.

Please note, ** Kamasi Washington ** will also be playing a special

** at the NAC Theatre. All tickets and Festival passes are available at OttawaJazzFestival.com , by phone at 613-241-2633 and in person at the Festival Box Office at 602-294 Albert Street, as well as at Compact Music’s two locations on Bank Street.

_ (press release) _ ** OTTAWA (June 16, 2016) ** —The City of Ottawa’s strength as a leader in showing hospitality to newcomers is celebrated with the launch of the 2016 Welcoming Ottawa Week (WOW) . Coinciding with World Refugee Day on June 20 this year—and at a time of an unprecedented movement of refugees worldwide—the WOW launch is an opportunity for all citizens of Ottawa to express our genuine welcome to newcomers, take part in dialogues, and simply have fun while learning new things. ...

_ (press release) _ ** Ottawa ** – Motorists and cyclists are advised that construction of the O’Connor Street Bikeway will begin on June 20 and will result in lane reductions during off-peak hours along O’Connor Street, between Laurier Avenue and Fifth Avenue. ...