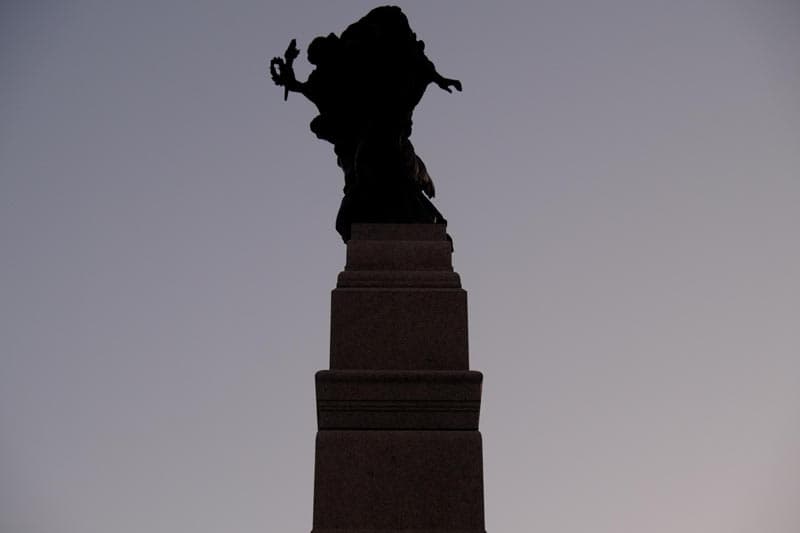 The National War Memorial during a vigil on Saturday evening to mark the centennial of the Battle of Vimy Ridge. (Howard Whiting/Lightchasers Photography)[/caption]

Hundreds turned out to a candlelight vigil Saturday night at the National War Memorial to mark the centennial of the Battle of Vimy Ridge.

A second ceremony was held at the memorial Sunday morning, with sentries posted at the Tomb of the Unknown Soldier, along with music, theatrical performances and an Indigenous smudging ceremony.

Meanwhile in France, around 25,000 people gathered at the Vimy Ridge Memorial on Sunday to mark the occasion, including Prime Minister Justin Trudeau and Governor-General David Johnston. 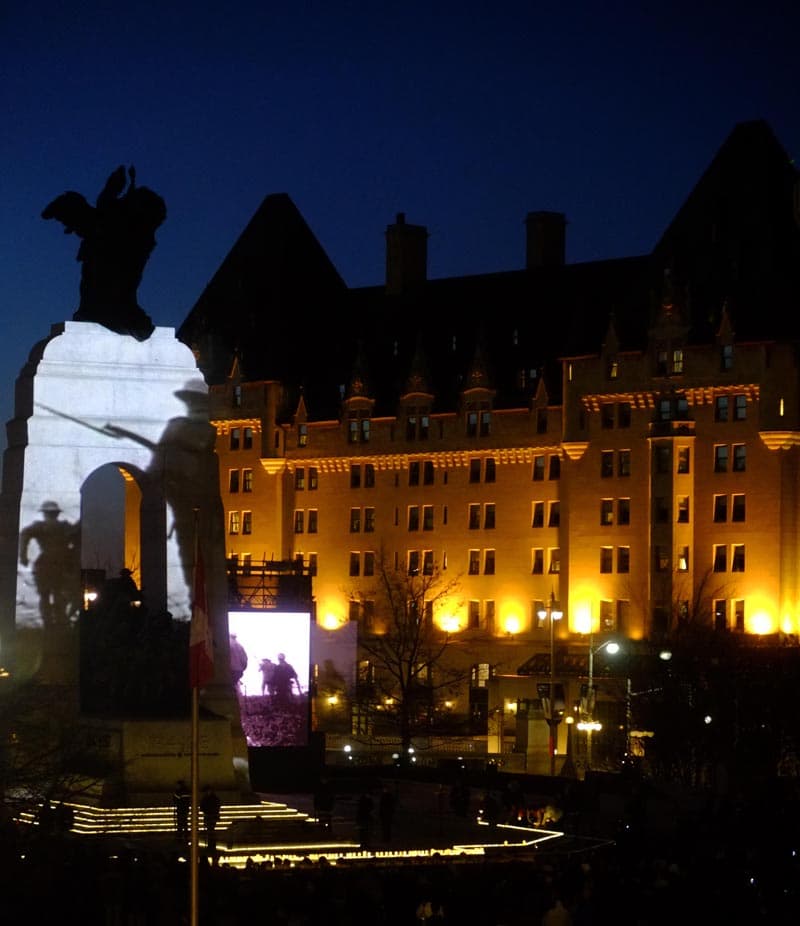 In April 1917 during the First World War, Canadian soldiers captured the strategically important Vimy Ridge from the Germans. Hundreds gathered at the National War Memorial on Saturday to remember the 3,598 Canadians who died in the battle. (Howard Whiting/Lightchasers Photography)[/caption]

Ottawans and visitors to the city took to Twitter to show their remembrance. Some posted photos of ancestors who took part in the battle, including some who died. #Vimy100

“Today, as people on both sides of the Atlantic Ocean gather to mark the 100 th anniversary of the Battle of Vimy Ridge, there will be difficult memories of loss and of suffering, but also memories of many heroic acts of bravery and of sacrifice on the part of those who served. "On this day a century ago, thousands of Canadian soldiers stood far from home together with their allies in defence of peace and freedom. They fought courageously and with great ingenuity in winning the strategic high point of Vimy Ridge, though victory came at a heavy cost with more than 10,000 fallen and wounded. "I am pleased that my son The Prince of Wales, and my grandsons The Duke of Cambridge and Prince Harry, are attending the commemorations today. "As Colonel-in-Chief, Captain General and Air Commodore-in-Chief of Canadian Armed Forces units, I have often borne witness to the professionalism and dedication, as well as the sense of equality, of respect, of perseverance, of sacrifice and of hope that infuses our military. "It is our duty to remember and honour those who served so valiantly and who gave so much here at Vimy Ridge and throughout the First World War.”

"On this day a century ago, after months of careful planning and surveillance, through considerable innovations in tactics and technology, and after remarkable determination and courage, the Canadian Corps took Vimy Ridge. "Despite all of these efforts, the outcome was uncertain, the cost of victory very high. Three thousand, five hundred and ninety-eight Canadians were killed in the fighting. Seven thousand were wounded. On the home front, millions of Canadians waited anxiously for news of their loved ones. "Today, as we mark the 100 th anniversary of the battle, we honour the soldiers who fought at Vimy. We have the opportunity to look back on our history and to learn valuable lessons from the past. Indeed, we have that responsibility. "Sharon and I are honoured to join the tens of thousands of people attending the commemorations today at Vimy in France, while Canadians gather for memorials in communities large and small across the country. Let us remember those soldiers who sacrificed so much and let us strive always for a better understanding of our history and for peace. Lest we forget."

“One hundred years ago, on a gentle slope in France, the four divisions of the Canadian Corps fought for the first time as one. They were ordinary – yet extraordinary – men, from all corners of the country: Francophone, Anglophone, new Canadians, Indigenous Peoples. “On Easter Monday, April 1917, battling through snow, sleet, and constant machine gun fire, they broke through an impregnable fortress and achieved a historic victory. They succeeded where other armies had failed – but at a great cost. Nearly 3,600 Canadians lost their lives. Over 7,000 more were wounded. The Battle of Vimy Ridge remains one of the bloodiest battles in Canada’s history. “Despite these losses, Canadian bravery and ingenuity won the day and led to one of the most decisive victories in the First World War. The innovative fighting techniques used so effectively by our soldiers at Vimy Ridge would contribute to the final Allied victory a year and a half later. “Many of the soldiers wearing the Canadian uniform that day were immigrants to this country. People of many languages and backgrounds, representing every region in Canada, fought for the values we hold so dear: freedom, democracy, and peace. In the words of one veteran: ‘We went up Vimy Ridge as Albertans and Nova Scotians. We came down as Canadians.’ “Today, as we gather to commemorate the 100th anniversary of the Battle of Vimy Ridge, we remember the thousands of Canadians who gave their lives far from Canada’s shores. We pay tribute to the 100th anniversary of a pivotal battle that has left an indelible mark on our history. And we thank every Canadian who has answered the call to serve for their selflessness and sacrifice. “Lest we forget.”

[ ](https://nac-cna.ca/en/event/14962?utm_campaign=nacp-16-17-en-jimbryson&utm_medium=display&utm_source=ottawastart&utm_content=static-1038x576-desktop) ** _ “Once you have had a chance to see Bryson perform (or hear one of his records), you begin to understand why people adore him. Basically, there’s no forgetting the experience.” – _ ** _ FESTIVAL PEAK _ ** Jim Bryson ** is one of the finest songwriters working anywhere today. ...

_ (Via NCC) _ The National Capital Commission’s (NCC) Board of Directors today approved _ The _ _ Plan for Canada’s Capital, 2017–2067 _ . The Plan will be launched officially on May 9, 2017, at a special event at the Shaw Centre, in collaboration with the Ottawa Chamber of Commerce. ...