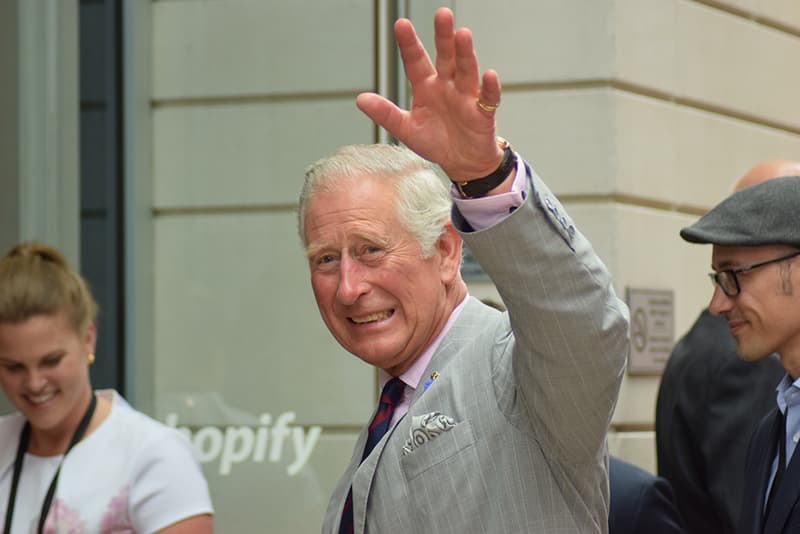 Prince Charles waves to a crowd gathered around Shopify HQ on Gloucester Street, shortly before heading in for a visit. (Devyn Barrie/OttawaStart.com)[/caption]

Just as the Prince of Wales was about to step out of his car, a voice permeated the crowd that had gathered on Gloucester Street to watch him do it.

It’s a short walk to the doors of Ottawa e-commerce company Shopify, but Charles took his time. As he stopped to wave at the crowd, they broke into song; a bright rendition of _ O Canada _ to serenade the future King of Canada.

A young boy came forward and Charles, surrounded by bodyguards, greeted him.

It was just another stop on the route on Canada Day as the Prince and his wife Duchess Camilla toured the country to mark Canada 150, a journey which began for them in Iqaluit on June 29.

Outside Shopify, the crowd’s glimpse of His Royal Highness lasted just a few minutes before he was whisked into the building and up the elevator.

Inside, Charles met intern students from Carleton University’s computer science program. He tried out a video game and seemed charmed by it – evidenced as he made sounds such as “ooh” playing it. 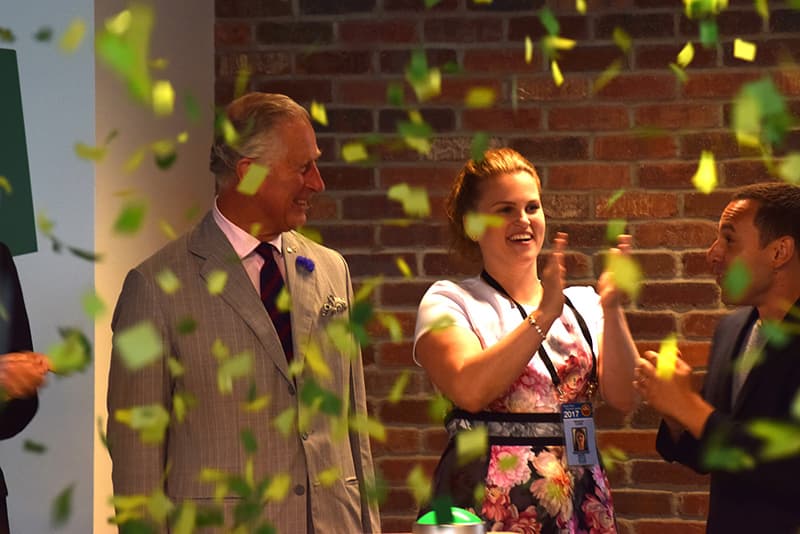 Confetti rains down inside Shopify HQ after Charles hit the launch button for 14 new businesses.[/caption] 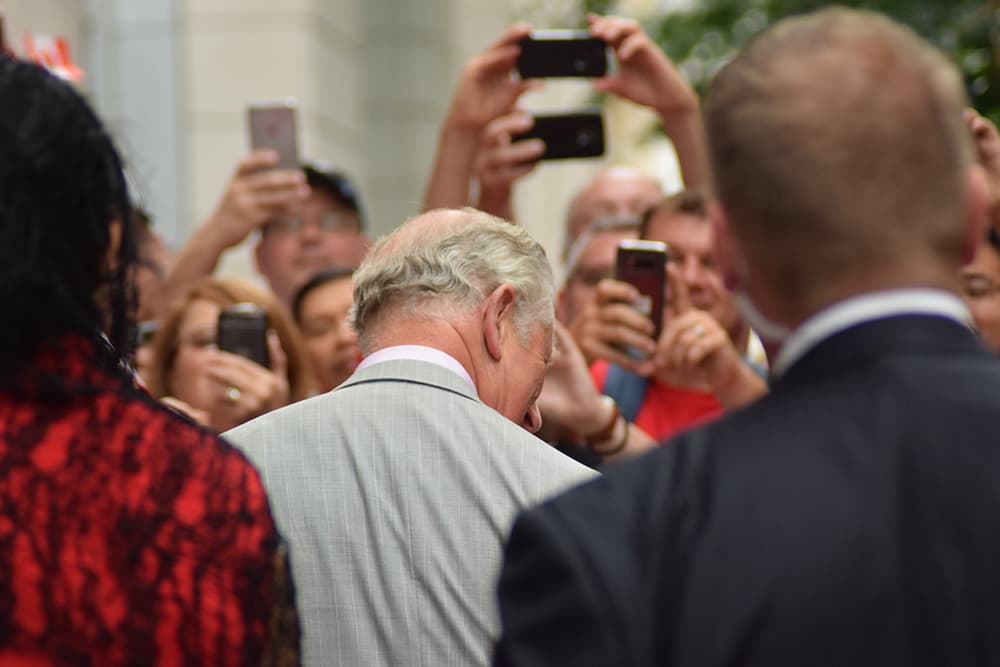 Charles stops to greet some members of the crowd.[/caption] 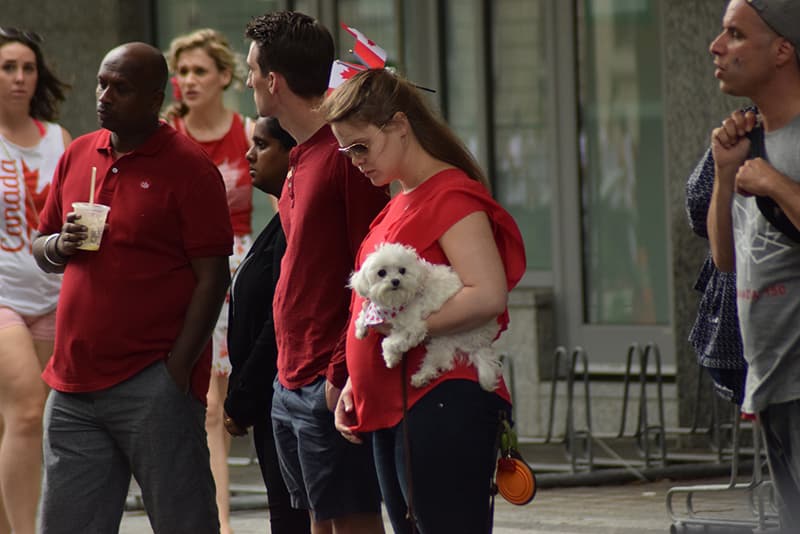 A woman waits with her dog shortly before the Prince’s arrival.[/caption] 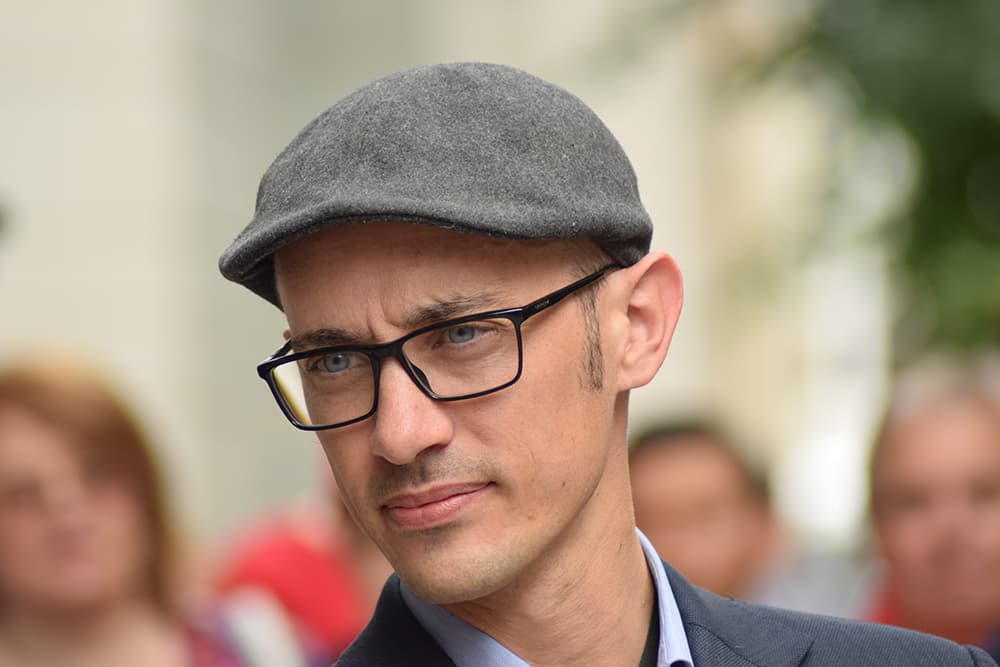 Shopify cofounder Tobias Lütke waits for Charles to arrive, who was delayed due to traffic difficulties downtown.[/caption] 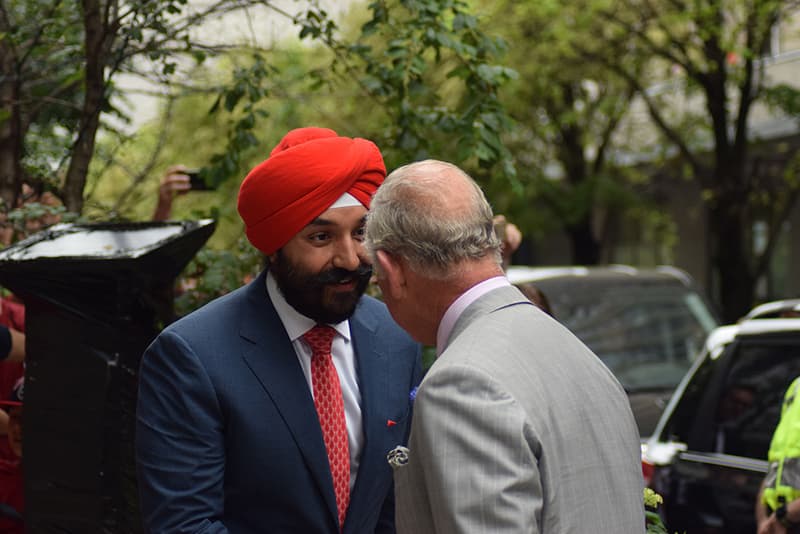 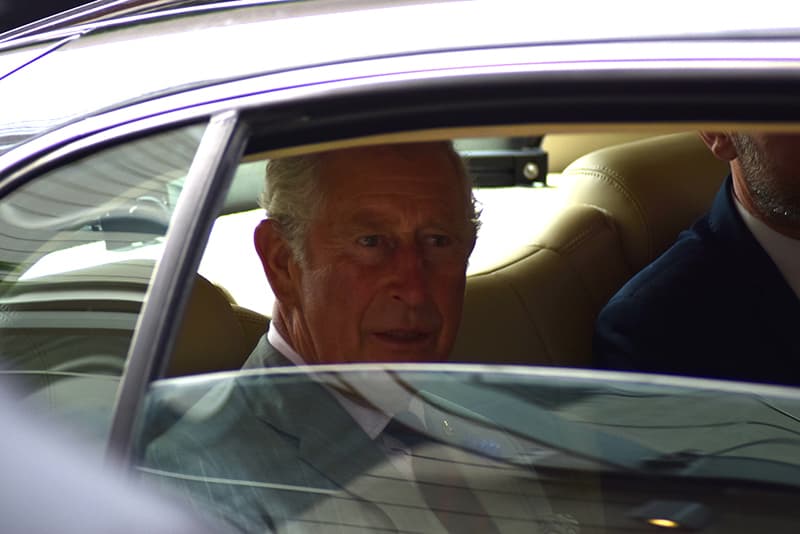 Charles rolls down his window for the crowd to get a final look before heading off to Rideau Hall after the Shopify event.[/caption]

For Navdeep Bains, federal minister of innovation, science and economic development, it was a golden opportunity to showcase Canada’s “culture of innovation,” as he called it.

“This is really about showcasing Canada,” he told _ OttawaStart.com _ after the Prince left.

Charles met with the founders of three local businesses that sell on the Shopify platform – a good display of Canadian business and innovation, Bains said.

The businesses were Victoire Boutique, Nora Swimwear and Tease Tea.

The Prince’s other activities Saturday included opening the Canadian History Hall at the history museum in Gatineau, officially reopening the NAC following its renovations and a reception at Rideau Hall.

He made a national address on Parliament Hill during the main Canada Day afternoon show, striking a reflective tone on the growth of Canada.

“Ladies and gentlemen, we should be clear and proud that we are celebrating a country that others look to for example,” he said in his speech.

anniversary, King George V sent a telegram to Victor Cavendish, the governor general at the time, to wish the nation a happy birthday.

“In which he said, ‘I rejoice with the Dominion of Canada in celebrating its strong, ever growing, prosperous life’,” Charles said. “My great-grandfather’s message to this remarkable country… is one that holds true to this day and which I am so very proud to reiterate to you all.”

Charles and Camilla boarded the plane back to U.K. around 8:30 p.m. Saturday at the Ottawa airport. _ With files from The Canadian Press _

Although Canada Day celebrations are over, events will still be taking place across the city over the next six months to celebrate Canada’s 150th birthday. From July 16 to Sept. 24, the public is invited to attend Kontinuum in the Lyon station LRT tunnel. ...

People from all over the country gathered on Parliament Hill to ring in 150 years of Confederation on Canada Day, here are some photos from the Hill. _ Photos by Devyn Barrie/OttawaStart.com _ [caption id=“attachment_71771” align=“alignnone” width=“1000”] Parts of the lawn flooded due to heavy rainfall. ...