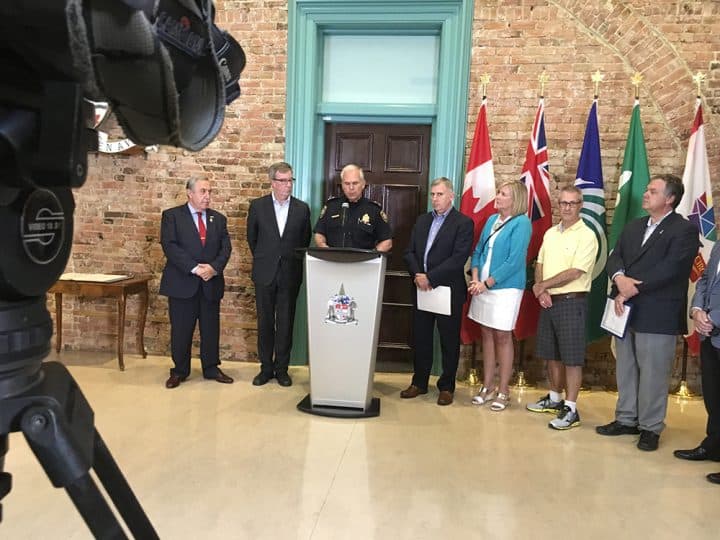 In an effort to increase security during Canada Day festivities, streets in the downtown core will close earlier than they did last year and police checkpoints will be tightened.

City officials, including Mayor Jim Watson and Ottawa police Chief Charles Bordeleau, detailed what security measures will look like around Ottawa for Canada Day at a news conference Friday.

“A number of streets are going to be closed in fact earlier than normal,” Watson said.

Watson said the early closures are because of an increase in events this year for Canada Day celebrations which span from June 30 to July 2.

“This will fact be the largest Canada Day event in the city’s history,” Watson said.

If you’re planning to attend any Canada day celebrations downtown this year, you’re going to want to leave early to get through the checkpoints. This year you will have to go through tents on Wellington Street where yourself along with your bags will be searched.

The new configuration will “allow for more people to go onto the Hill,” Bordeleau said.

“We have to recognize that we live in a world that has changed dramatically over the last decade where there are people that want to do evil deeds,” Watson said. “(But) our city is used to big crowds and major events whether it’s a visit from the Pope or the president of the United States.”

Bordeleau wouldn’t say whether concrete blocks or dump trucks would be used as barriers, as they were during New Year’s Eve, although Watson previously suggested to The Canadian Press that they may be.

“No one can possibly guarantee or say that there is not going to be an incident, but what we can do is work with our professionals to minimize it,” Watson said.

“I want to remind the public to be aware of their surroundings, to be safe during this special time in our country’s history,” Watson said. “See something, say something,”

He also encouraged the public to “plan ahead and plan early because it’s going to take you a little longer to get through security to get on the Hill.”

All details regarding road closures and bus detours will be posted on Ottawa.ca in the coming weeks. _ Correction: Due to an editing error, an earlier version of this story said nine had died in the June 3 London terror attack. The correct number is eight. _

[caption id=“attachment_70096” align=“aligncenter” width=“720”] Metrolinx has been giving police access to Presto travel records, sometimes without a warrant. (Metrolinx)[/caption] The apparent ability of police to access Presto user travel records is just another example of how increasingly difficult it is to avoid having your movements tracked in today’s society, a privacy advocate said Friday. ...