Several routes, including major crosstown lines such as 96 and 118, will be renumbered. 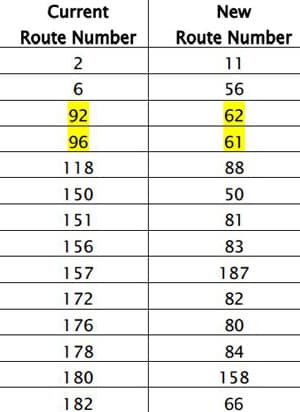 In a memo, OC Transpo general manager John Manconi said more capacity will be added to some bus routes, particularly connexion buses in west end communities such as Barrhaven, Kanata and Stittsville. Some buses will also have their schedules adjusted.

Routine shifts to routes that serve post-secondary schools will also be made. Carleton University routes 4, 104, 111 as well as the O-Train Trillium Line will have reduced service.

Routes 85 for uOttawa and 129 for La Cité will also be reduced.

“Sufficient capacity will continue to be available for expected ridership levels, and there will be no change to the times of the first or last trips.” Manconi wrote.

[caption id=“attachment_66477” align=“aligncenter” width=“1920”] Screengrab from the Parliament Hill cam showing a blanket of smoke during the annual April 20 marijuana demonstration, around 4:20 p.m.[/caption] Things moved slowly on Parliament Hill Thursday – and not just because the House of Commons is adjourned until May 1. ...

[caption id=“attachment_66165” align=“aligncenter” width=“5760”] The NAC is launching an ambitious ballet to celebrate Canada 150, involving the work of three choreographers and three composers. The Alberta Ballet, one of the companies involved, rehearses. (Alberta Ballet via NAC)[/caption] For Cathy Levy, executive producer of dance at the NAC, 2017 seemed like a perfect time to think big. ...