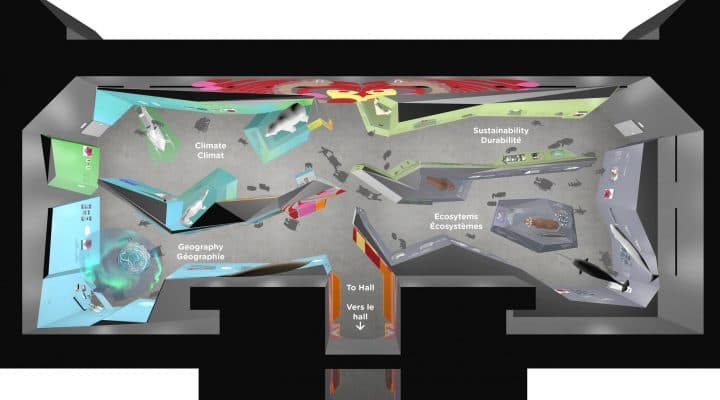 GSM/CMN © Canadian Museum of Nature.[/caption] _ (press release) _ ** OTTAWA, Sept. 20, 2016 ** —The Arctic’s rich natural diversity and its important connections to humans are the focus of a new permanent gallery to open June 21, 2017 at the Canadian Museum of Nature, Canada’s national museum of natural history and natural sciences. The project is the museum’s key contribution to celebrate Canada’s 150

century,” says Meg Beckel, President and CEO of the Canadian Museum of Nature. “We are extremely grateful to Canada Goose for supporting our mission to create this contemporary space that will expose Canadians and visitors from abroad to this unique and important part of our country.”

Canada’s Arctic represents about 40% of the country’s land mass, and is home to more than 100,000 people and a surprising diversity of aquatic and land-based organisms. The Canada Goose Arctic Gallery will immerse visitors in a region that many will never visit in person, helping them explore the natural landscapes, its plants and animals, hear the voices of the people that live there and to think about the impacts of change.

“In making jackets that are designed to perform in the harshest climates on earth, we are constantly inspired by the Arctic – it’s infused in everything we do. We believe we have a responsibility to support the northern communities of Canada, and also to celebrate their skills, their land, and their people. This gallery is a continuation of our multi-million dollar commitment to the North, which started more than ten years ago. We’re honoured to be a part of this important endeavour that will bring the Arctic to life for the rest of the world,” says Dani Reiss, President and CEO, Canada Goose.

Upon entering the gallery, the Arctic will be introduced through a multimedia experience using sound, light and images, developed by the museum in partnership with the National Film Board.  Visitors then enter the wing, where they immerse themselves in the Arctic’s natural history and human connections through four broad themes: climate, geography, sustainability and ecosystems.

Each section features specimens or artifacts, interactive games and activities, videos and infographics to share the relevance of each theme to the story of the Arctic. Timeframes range from the deep geological past, when the Arctic was much warmer than today, to the present, where animals and humans are facing the challenges of climate change. 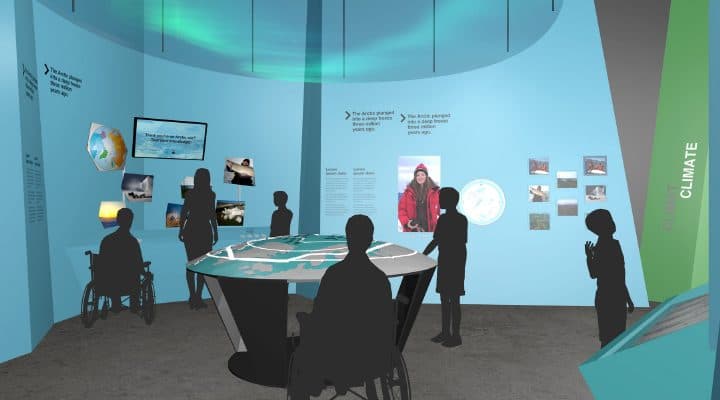 Illustration of the Geography Zone in the Canada Goose Arctic Gallery. A projection of the Aurora Borealis, and a 3D circumpolar map are two highlights in this section.

Highlights include an assortment of “star” objects that represent the themes in each of the four zones. A projection of the Aurora Borealis, and a 3-D circumpolar map will anchor the geography zone, for example. A bowhead whale skull covered by lichens will lead into the sustainability zone, which examines how Arctic peoples have used, and continue to use natural resources—from interactions with animals and plants for food, clothing and tools, to the extraction of energy resources, to the continuing connections to the land.

Five principal interactives or games will appeal to different types of learners. These include an Arctic Discovery Game about geography, a touchscreen experience to follow hunters during summer on the land, and a grocery game about food security, comparing prices in the Arctic to those in Ottawa. Two aquaria, one including Arctic Cod, will bring to life the Arctic’s marine food web. And 12 short videos called “People Capsules” will present first-person experiences of  those who live or work in the Arctic.

While the museum has a legacy of Arctic research dating back more than 100 years, the museum has developed the gallery’s content with input from an advisory committee, in order to include perspectives of Indigenous communities and others who have experience in the North. One outcome of this input is the Northern Voices Gallery, a special exhibition space in the Hall, to be curated by Inuit or Northern-based organizations. Exhibits will reflect past and current responses of northern peoples to their environment and landscapes. The inaugural show opening June 21, “Inuinnauyugut: We are Inuinnait” will be presented by the Kitikmeot Heritage Society, based in Cambrige Bay on Victoria Island , Nunavut.

Partners that have helped achieve the vision of the Canada Goose Arctic Gallery include the National Film Board, ArcticNet, Oceans North, Inuit Tapiriit Kanatami, the Canadian Wildlife Service, Vancouver Aquarium and Marine Science Centre, Environment and Climate Change Canada, Indigenous and Northern Affairs Canada and numerous Canadian universities. In addition to the signature sponsorship from Canada Goose, the museum has received additional financial or in-kind support from The Salamander Foundation and The W. Garfield Weston Foundation. The design consultant for the gallery is GSM Project in Montreal.

Entry to the Canada Goose Arctic Gallery, opening June 21, 2017, will be included with general museum admission. The Canadian Museum of Nature is located at 240 McLeod Street, Ottawa. Follow the museum on Twitter (@museumofnature) or on Facebook. For more information, visit nature.ca. ** About the Canadian Museum of Nature ** The Canadian Museum of Nature is Canada’s national museum of natural history and natural sciences. The museum provides evidence-based insights, inspiring experiences and meaningful engagement with nature’s past, present and future. It achieves this through scientific research, a 14 million specimen collection, education programs, signature and travelling exhibitions, and a dynamic web site, nature.ca. The museum’s Centre for Arctic Knowledge and Exploration continues the museum’s legacy of more than 100 years of research, documentation, and collections about the biodiversity of Canada’s North. ** About Canada Goose Inc. ** Founded in a small warehouse in Toronto nearly 60 years ago, Canada Goose has grown into the world’s leading maker of Arctic luxury apparel. Informed by the rugged demands of the Arctic, relentless innovation and uncompromised craftsmanship inspire the form and function of every collection. From the Antarctic research facilities and the Canadian High Arctic, to the streets of New York City, London, Milan, Paris, and Tokyo, people are proud to wear Canada Goose products. Employing more than 1,000 people worldwide, Canada Goose is a recognized leader for its Made in Canada commitment, and is a long-time partner of Polar Bears International. Visit canadagoose.com for more information.