Artist’s rendering of a finished St-Laurent Station. (via ligneconfederationline.ca)

Over the past few days I’ve been skimming the framing report for Ottawa’s new official plan — Ottawa Next: Beyond 2036.

It was presented to the planning committee in mid-February and contains the city’s evaluation of the forces that will change Ottawa in the coming century. It maps out several possible scenarios for Ottawa’s future, in the categories of the economy, social/cultural and quality of life, the environment, and urban form and mobility.

These scenarios are basically feasible speculations on what growth path the city might take, to enable planning for an uncertain future. Please use with caution.

Here are a few of my takeaways…

In its current planned form, the Confederation Line is primarily intended to get folks downtown. That’s groovy — unless…

What if in the future people don’t need to get downtown as much?

This report floats the possibility that the success of LRT in Ottawa will be its undoing.

One scenario proposes it will make decentralized growth across the city possible, in contrast with the present where downtown is Ottawa’s economic centre. In this alternate scenario, the report suggests more and more employers could locate in the suburbs as a result of improved transit.

Speaking hypothetically, it says: “The communities of Orléans, Kanata, and Barrhaven have grown and intensified significantly with the arrival of new businesses that have chosen to locate in the suburbs. This shift is supported by the quality of transit connections, strong real estate opportunities on large parcels of land that were ready to redevelop, and better infrastructure.”

It allows these communities to become more complete, morphing into mixed-use hubs where everything people need is within reach.

“Travel patterns have become more complicated as more people travel between suburbs without the need to go downtown. As transit was designed to get people from the suburbs to the downtown, the transit system is not responsive to new travel patterns. As a result, cars remain the dominant form of transportation outside the Greenbelt, creating increased congestion as well as challenges for vulnerable populations.”

(You could argue this is hardly different from the way things are now. Anyone who’s tried inter-suburb travel via OC Transpo would attest the idea that transit continues to be insufficient is certainly not groundbreaking.)

The feds as an employer affecting urban structure

In the scenario describe above, the federal government is still a major employer downtown. But elsewhere, employers pop up. That got me thinking about how federal employment might affect the future urban makeup, and this report doesn’t entirely address that.

There are some scenarios for Ottawa’s economic future, which tie in with this. One is where it could remain largely the same as it is now: with the federal government as its primary employer. In this scenario, the city still has a tech sector, still with more local branches of outside companies rather than made-in-Ottawa companies. “As such, the city remains vulnerable to the ebbs and flows of restructurings, closures and movements decided elsewhere,” the report says.

Or, there could be an economic boom thanks to an Amazon-esque employer in the knowledge sector bringing 100,000 jobs into the city. This triggers more jobs and more development, bringing new talent into Ottawa and sparking the birth of a new post-secondary institution. Further economic growth is mainly knowledge-based.

Or — and this third scenario does not seem to be mutually exclusive to the one above — high-speed rail could allow Ottawa-Gatineau, Toronto and Montreal to act as a unified economic region. Again, a high-tech-focused economy. And Ottawa’s the most “balanced” of the three cities, in this scenario.

I thought there was a missing connection between these economic scenarios and what’s suggested in the urban form and mobility scenarios. The first economic scenario, where the feds are still the #1 employer, should in my mind line up with a scenario where people (federal employees) keep living in the outer suburbs and commute in.

The difference with LRT is that it may make the outer suburbs more attractive than ever to live in. The improved transit means no more traffic headaches getting in and out.

At least that’s my view. The report has some of its own — including a scenario placing downtown as the reigning economic, transportation and cultural centre. Population growth is urban-centric. Suburbs outside the greenbelt continue growing, but slower. 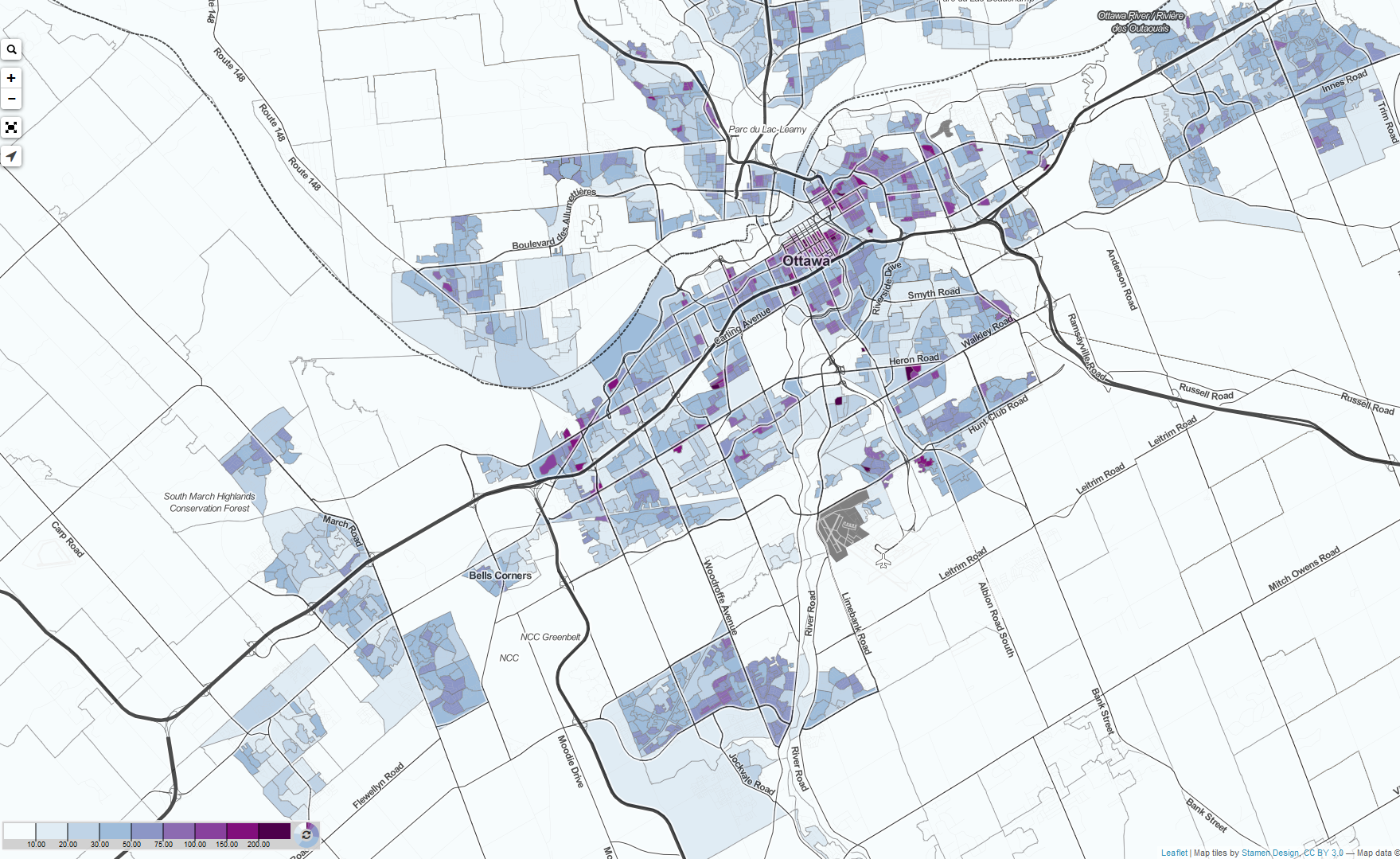 Photo: CensusMapper shows the density of Ottawa based off 2016 census data. The darker the colour, the more people per hectare living there.

Independent of any scenarios, the report notes an ongoing trend that people are moving away from single-detached houses and towards higher-density forms like apartments. The Beyond 2036 report suggests that in any case, detached houses will likely become too expensive for most people in the future. Coupled with land-use pressures, high-density development will take the lead in the future, it says.

So development outside the greenbelt may get a whole lot more urban in the future, regardless of whether the feds remain Ottawa’s primary employer.

As for LRT making the outer suburbs more attractive to live in, it seems to me that will depend on housing affordability. Given recent history around that topic, we can safely file that under “up in the air”.

One of the trends identified in the report is around changing demands for transportation. Young people, it observes, are choosing more and more to forego auto ownership.

“With personal mobile devices, social media and the ability to work and communicate from home, the need to drive to support daily needs has started to decline,” it notes.

So in the coming years, there will be more demand for an array of transportation options in Ottawa.

It’s not part of the report’s future scenarios but this section does note Wi-Fi on buses as an example of how transit is becoming more comfortable and therefore enticing for people to use. I wonder if OC Transpo will be introducing this any time soon?

At last check, there appears to be no movement on Wi-Fi on buses or trains in Ottawa. OC Transpo’s double-decker buses are Wi-Fi capable but a 2016 report by CBC said the “city wasn’t able to find a business model that would work.” OC Transpo told CBC then that it was looking for a partner that would allow for Wi-Fi on LRT. There doesn’t seem to have been an update since, except that you’ll be able to get cell service from major carriers in the tunnel.

Hey, what IS a “liveable city”?

The City of Ottawa says it wants to become “the most liveable mid-sized city in North America over the next century.” Indeed, the new official plan will turn this vision into a tangible long-term strategy to achieving this.

It’s hard to disagree with that goal, but it sounds vague and high-level. Understanding what constitutes a “liveable” city is important if we’re going to aim for it. The city spelled out what it means in the report.

“A liveable city or place should be more than just habitable,” the report declares. It should be safe, with good educational and healthcare institutions, transportation options, plus shops, services and public space — basically, it should have a range of amenities and resources to serve the comfort and well-being of its citizens.

“(A liveable city) should give its citizens the sense of freedom that comes from knowing that each person can pursue their own fulfilment within a supportive, equitable and enriching social environment.”

In many ways, Ottawa already has these things, it said. But the city will pass the million-person mark for population this year and is expected to top 2–3 million later this century. Thus, there is work to be done in “expanding” its liveability and ensuring its resilience, it says.

You can read the 91-page report on the city’s website. Let me know your thoughts in the comments and whether I’m totally off base re: LRT in the suburbs!

Ottawa City Hall. Photo/Devyn Barrie Via Ottawa Public Library Celebrate National Poetry Month with creative and fun programs and events at Ottawa Public Library this April! Share poems by your favourite poets and discover poetry of all genres by joining us for POEtry KAraoke on Monday, April 8 at Bar Robo. ...

Toodles. (Photo by Devyn Barrie) It’s been over a year since the Carlingwood Sears closed, along with every other store in the bankrupted chain. Now, it’s finally being demolished to make way for something new. The owners of the Carlingwood Mall applied to tear down the huge old store in August last year. ...