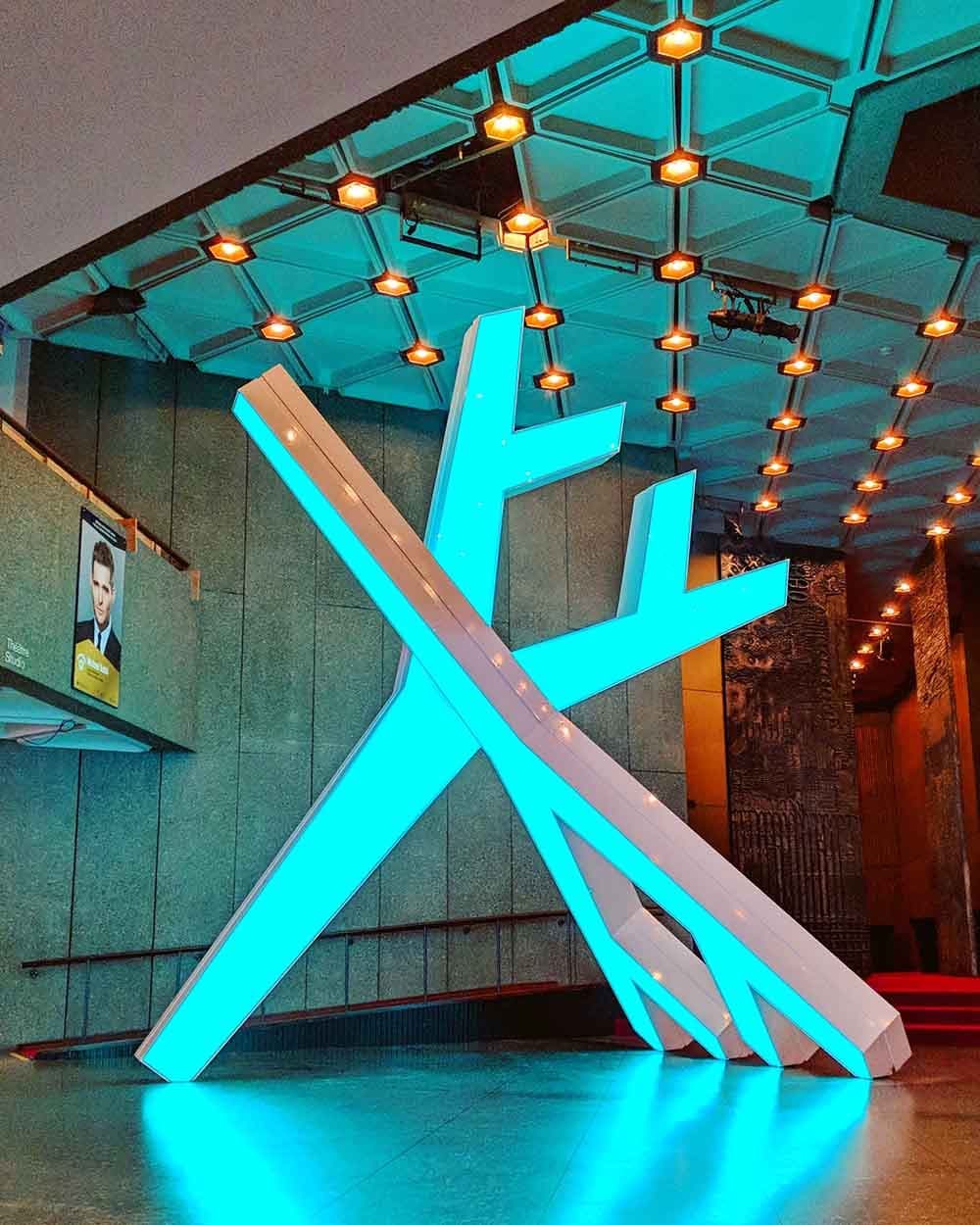 Via NAC[/caption] _ (Via NAC) _ ** January 12, 2018– OTTAWA (Canada) ** – The National Arts Centre is delighted to announce the installation of _ Frost _ , a 6.1-metre interactive sculpture that will illuminate the National Arts Centre’s Canal Foyer throughout the winter. _ Frost _ is inspired by architecture, the geometry of a single snowflake, and the allure of a freshly frosted-over window pane.

A fractal is a repeating pattern that is seen in many natural and human-made objects. Artist-team Studio F Minus took that concept and applied it to the construction of a snowflake. They began by isolating a single “Y” shape, a dominant architectural feature in the Santiago Calatrava-designed building for which the artwork was commissioned. Then by repeating and rotating that shape, the artists created a unique crystalline structure.

Visitors are encouraged to touch _ Frost _ and enjoy its interactive effects. For example, by running your hand along the sculpture, you will see that you cast a shadow in the field of light, the same way you leave a trail when drawing on a frosted window with your finger. _ Frost _ arrives on the heels of _ Cloud, _ a tremendously popular interactive sculpture of 6,000 light bulbs in the shape of a cloud, by Caitlind r.c. Brown and Wayne Garrett. It came to the NAC Canal Foyer as part of the _ Canada Scene _ festival. _ _ In addition, in the coming months the NAC will be re-installing its art collection, which has been in storage during the NAC’s Architectural Rejuvenation Project. Works includes the Glenn Gould CD318 piano (now in place), the Jessie Oonark Tapestry, _ Musica _ by Leonardo Nierman, and _ Clan Unity _ by Dempsey Bob, among many others. ** ABOUT THE CREATORS ** Studio F Minus is the collaborative of artists/architects Mitchell F Chan and Brad Hindson, working with a network of world-class engineers, fabricators, and technologists to create large-scale art projects for broad public audiences. Since its founding in 2008, Studio F Minus has been commissioned to produce major public artworks for cities across Canada and has exhibited installation works in galleries and museums internationally. Mitchell F Chan and Brad Hindson live and work in Toronto, Ontario. _ Frost _ was commissioned by Brookfield Place Toronto.

[caption id=“attachment_85625” align=“aligncenter” width=“1000”] Kathleen Wynne, Ontario premier, will host a town hall in Ottawa on Jan. 18. In this file photo she hosts a Q&A with students at Algonquin College in spring 2017. (Devyn Barrie/OttawaStart.com)[/caption] _ (Via Carleton Provincial Liberal Association) _ Premier Kathleen Wynne is traveling across Ontario to hear from people on the issues that matter most to them. ...

Before the final Ottawa Community News editions land on doorsteps Jan. 11, Theresa Fritz wrote a suitable signoff message to readers about the passion of community journalism. Eight area newspapers are being closed after a trade between two of Canada’s largest newspaper chains. ...