** UPDATE: The city says registered letters were delivered between Sept. 20-23 to homeowners who may be expropriated. After our request for a list of properties, the city sent a second round of letters which were delivered on Oct. 12 and 13. **

A Nepean homeowner says he had no idea the city is considering his property for expropriation as part of the proposed Baseline Road bus rapid transit corridor.

Atsu Dogdey, who lives along Baseline, says he only learned his property may be expropriated when ** _ OttawaStart.com _ ** contacted him for comment on Friday.

“I’m really shocked,” he said, adding he’d checked the mail days ago and never received a letter to let him know. “I haven’t read about the project either… I don’t know what to say.” 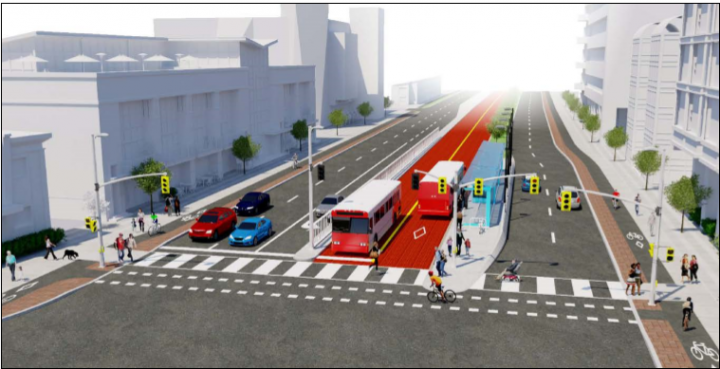 What the corridor will look like (City of Ottawa)[/caption]

The Baseline BRT (bus rapid transit) corridor proposes overhauling Baseline from Bayshore to Heron, replacing the centre median with two bus lanes. It would also have four car lanes, a bike lane and new sidewalks. The bus lanes are expected to shave 6.5 minutes off the average commute.

Versions of the plan have been in the works since 2012, with the latest version presented to the public on October 5. It is currently in the environmental assessment phase and will be presented to the transportation committee next year.

We’ve obtained a list of the 15 properties from City Hall:

After we spoke with Dogdey, he rushed out to check the mail, confirming he hadn’t yet received any letters about expropriation.

He recalled getting a letter earlier which told him about the public consultation on Oct. 5, but says it was on too short a notice for him to attend. “It’s hard to just up and change your schedule in a few days,” said his wife Cayo.

They want to see more done to inform residents.

In an email Oct. 11, the city’s manager of transportation planning Vivi Chi told ** _ OttawaStart.com _ ** the acquisitions won’t start for some time.

“It is too early to initiate the property acquisition process. Before that can happen, funding for implementation has to be secured and detailed design has to be undertaken to finalize the property requirements.”

As for Dogdey, he says he’ll be calling his city councillor Rick Chiarelli first thing Monday. 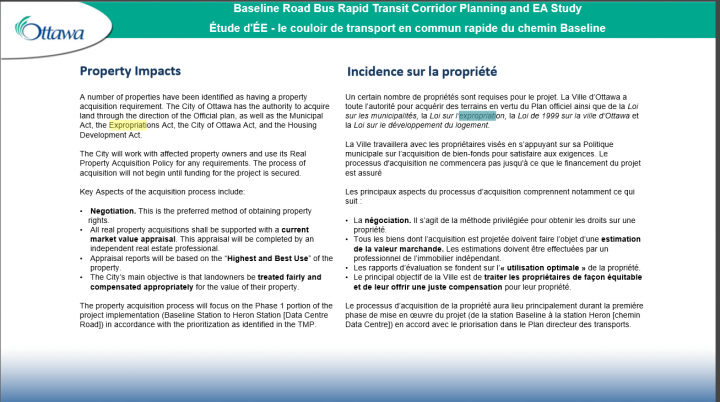 The city says its goal is to ensure landowners are “treated fairly and compensated appropriately” if their land is expropriated. (City of Ottawa)[/caption]

_ (press release) _ ** Ottawa ** – Mayor Jim Watson will be joined by His Excellency the Right Honourable David Johnson, Governor General of Canada, Councillor Riley Brockington, Chair of the Summit, and Jonathan Lister, VP Americas, Sales Solutions and Canada Country Manager at LinkedIn, for the Education and the Economy Summit on Friday, October 21 at City Hall. ...

_ Our crowdsourced list of the best events in Ottawa this week! _ _ You can find even more events on our Ottawa Event Calendar . Check back here, as the list is updated throughout the week. _ ** Also check out our big list of Halloween events! ...