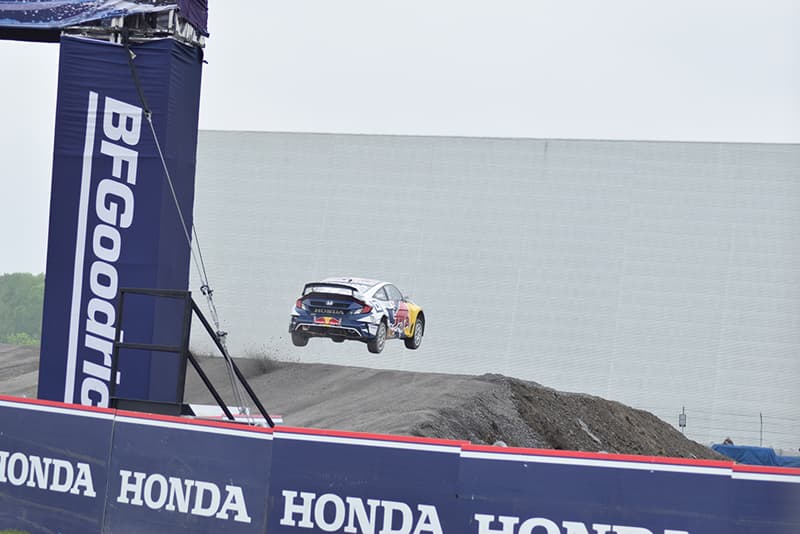 As we waited at the starting line for the OK to go, I remember saying to myself “What was I thinking?”

There I was, seated next to American racer Mitchell deJong, in a 600hp race car capable of zero to just under 100 km/h in about two seconds. And I was about to go way faster than I’ve ever gone before in a car.

With a thumbs-up from a race official, we were off. I’m not sure how fast exactly we were going – I couldn’t move to get a look at the speed indicator – but an official later told me the cars generally top out in the neighbourhood of 200 km/h.

The ride is about as jerky as you’d expect. Despite being mostly immobilized I was still sliding side to side in my seat.

All the while deJong, who’s 19 but started driving the Rallycross at 15, was deftly switching the gears every few seconds and manhandling the steering wheel. He slid smoothly into turns as tight as my knuckles were clenched.

The inside of a race car is deafening, between the grind and clatter of the gearbox and howling moan of the engine. The interior is bare, full of exposed metal and wires hanging under what one may call a “dashboard” despite it resembling one very little.

I was dutifully strapped down in a lumpy metal seat with a chest belt, topped off with a heavy helmet (and baggy burn suit.) A neck brace, which I assume is to keep my neck from snapping in a collision, ensured I could only look straight ahead.

Not like I could take my eyes off the road if I even wanted to, of course.

Red Bull Global Rallycross tracks are always very short and usually have a portion made of dirt. The Ottawa track is 1.22 km long and is 35 per cent dirt.

Once you’ve turned a dirt corner at highway speeds almost on a dime, you won’t want to go back to pavement.

And when the 70 feet dirt jump appeared in the horizon, well, I can’t reprint what my exact words were.

All the action lasted roughly one minute.

When we pulled back into the paddock, deJong looked over and gave me a thumbs-up, which I returned.

But wouldn’t I love to go again.

The Canadian debut of the Red Bull Global Rallycross wrapped up at the Canada Aviation and Space Museum Sunday evening. American Tanner Foust was declared round six winner on Sunday in the Supercar category, with Scott Speed in second and Mitchell deJong in third. ...