Travelling to Canada Day festivities downtown will be an extra pain this year, here’s a quick run through of the situation. ** Road closures ** Just about every road anywhere near Parliament will be closed. 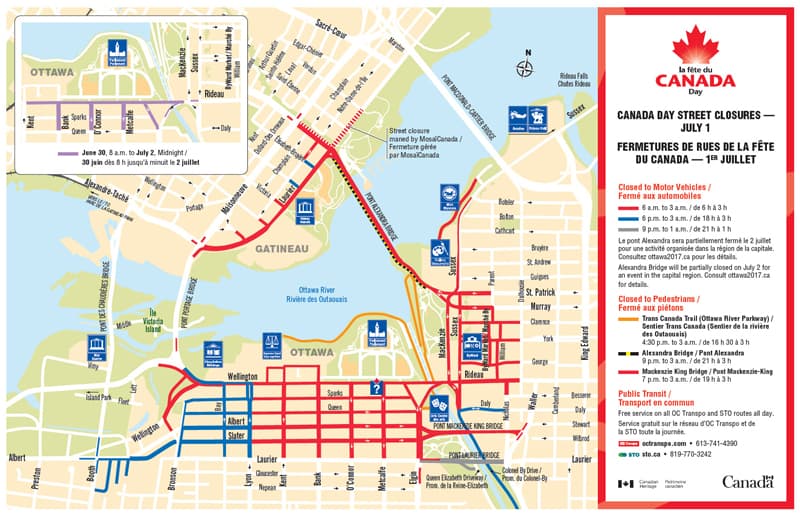 Here’s an interactive map from the Government of Canada:

Pedestrian/bike trails behind Parliament also won’t be accessible. ** Transit ** Transit on OC Transpo and Para Transpo is free all day. It’s a Sunday schedule, so only routes that would normally run on a Sunday will be in service, plus 91 to Orléans after the fireworks, but there will be extra buses to handle the demand.

Officials say you should arrive two or three hours early to get through it all.

Folding chairs are OK. But sorry, photographers, you can’t bring tripods (or bipods or monopods) as they will be confiscated. Alcohol is also not allowed.

Food vendors will be in the streets nearby and you are allowed to bring snacks and water. Refill stations for water bottles will be on the Hill.

https://twitter.com/ottawastart/status/877997342250618880 ** Accessibility ** There will be a raised platform seating area for people with special needs on the south side of the west lawn. Accessible washrooms will also be on-site.

The seating area is accessible via Metcalfe Street and a shuttle to it will be provided from the intersection of Bank and Wellington Streets.

The noon show on the Hill will also have simultaneous interpretation in American Sign Language and an induction loop system will be in place at the raised platform for those hard of hearing. ** _ If you liked this post, consider subscribing to our free Etcetera newsletter . Every Thursday we send out a roundup of local events – this week’s will be a special Canada Day edition! _ **

[caption id="attachment_71118” align="aligncenter” width="1000”] Governor General David Johnston salutes during the annual inspection of the Ceremonial Guard.[/caption] Governor General David Johnston donned his red dress uniform and medals Sunday for what will likely be his last inspection of the Ceremonial Guard before his term as viceroy ends in September. ...