They came to deliver a gift of sweets and a letter of appreciation to Stittsville United Church for their support following the tragic shooting at the Quebec City Mosque in January 2017.

June 25 was a special day for Muslims around the world as they marked the end of the holy month of Ramadan by celebrating Eid al Fitr. Imam Sikander Ziad Hashmi and more than a dozen adults and children from the KMA took time on their holy day to visit a number of churches who had offered them support in recent months, including Stittsville United. The KMA members happened to arrive during the time of the Sunday morning worship service and were invited to the front of the sanctuary to bring greetings. 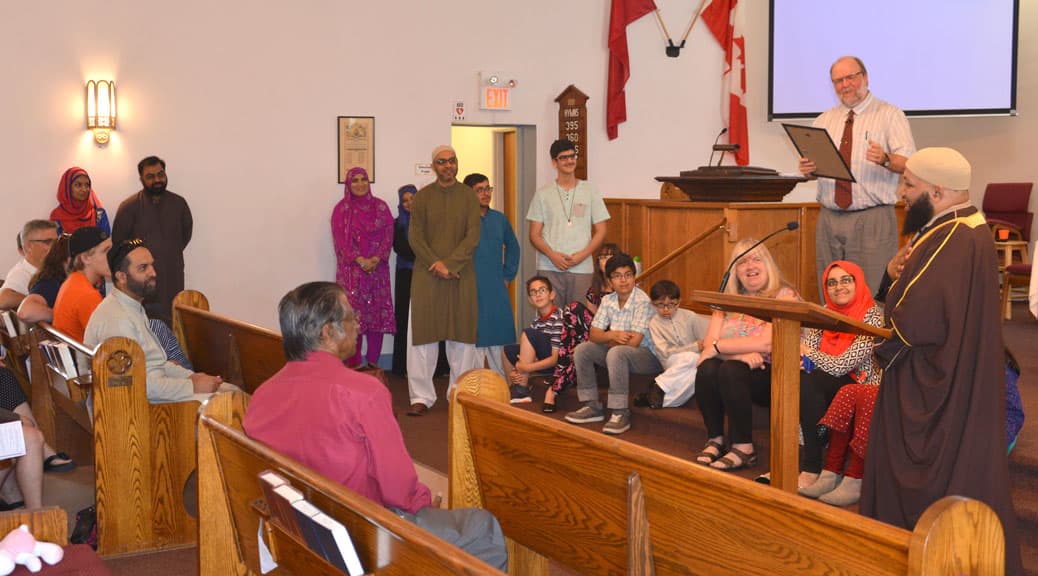 In the days following the Quebec City Mosque tragedy Stittsville United Church prepared cards which were signed by adults and children from the congregation which were then sent to several members of the Muslim community in the Ottawa area and in Quebec City. Stittsville United also held a memorial vigil on February 3 to offer prayers and support to the members of the Muslim community. In appreciation for these efforts, Imam Sikander Hashmi offered Stittsville United Church a framed copy of their letter of appreciation, which states:

“As we celebrate the end of Ramadan, we would like to express our heartfelt gratitude for your friendship and support following the Quebec City mosque shooting on January 29, 2017. Your kind words along with the outpouring of support across our country helped lift the cloud of sadness, shock, fear and anxiety that had weighted heavily upon the hearts and minds of many members of our community. Thank you for your care and compassion. We look forward to opportunities to strengthen the bonds of friendship between our two congregations, to work together in building compassionate and loving communities, and to stand together against all forms of hate and violence.”

Those present were truly moved by this act of kindness and solidarity from the members of the KMA and the sweets were quickly enjoyed by those who stayed for the fellowship and refreshments following the worship service. The members of Stittsville United also joined their voices in wishing their Muslim friends the traditional salutation of, “Eid Mubarak,” which means “Blessed Festival.”

In the past, Stittsville United Church has hosted opportunities to share together with members of the Muslim community and the congregation looks forward to building stronger bonds of friendship and cooperation with members of the Kanata Muslim Association and others in the Muslim community in Ottawa. _ Rev. Grant Dillenbeck is the minister of Stittsville United Church. _ _ This post was originally published on our sister site StittsvilleCentral.ca. After publication, we learned it was also discussed on BBC Radio 4’s Thought for the Day . _

Come visit us and take a step back into medieval times! The ** Osgoode Medieval Festival ** celebrates its tenth anniversary in high fashion, promising a little bit of fun for everyone! Come and witness daring sword fights, mesmerizing dancing, birds of prey demonstrations and much more! ...

Although Canada Day celebrations are over, events will still be taking place across the city over the next six months to celebrate Canada’s 150th birthday. From July 16 to Sept. 24, the public is invited to attend Kontinuum in the Lyon station LRT tunnel. ...