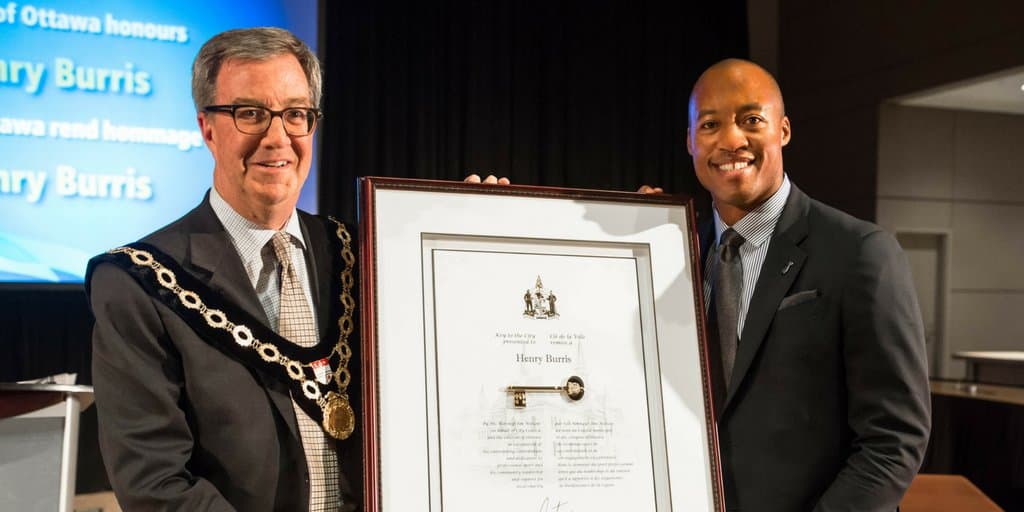 Henry Burris, former Redblacks quarterback, recieves the Key to the City from Mayor Jim Watson on Thursday, Sept. 7, 2017. (via City of Ottawa)[/caption] _ (Via City of Ottawa) _ ** Ottawa ** – Thursday evening, Mayor Jim Watson presented the Key to the City to Henry Burris, current CTV Morning Live Host and former REDBLACKS quarterback, at a ceremony at City Hall. The key was presented to Mr. Burris in recognition of his outstanding contribution and dedication to professional sport and his community leadership and support for local charity.

Henry Burris is a former Canadian Football League (CFL) QB who played for 17 years for four teams; the Calgary Stampeders, the Saskatchewan Roughriders, Hamilton Tiger-Cats and the Ottawa REDBLACKS. Burris won three Grey Cups, including the first-ever for the REDBLACKS franchise in 2016. Mr. Burris was named the CFL’s Most Outstanding Player twice; in 2005 and 2015. When he retired, Burris was third all time in career CFL passing yards.

Born in Spiro, Oklahoma, Mr. Burris was a football star Temple University in Philadelphia, Pa., setting numerous records. He also played for two years in the National Football League with two of its most storied franchises, the Chicago Bears and Green Bay Packers.

Since joining the Ottawa REDBLACKS and making Ottawa his home, Mr. Burris has made a significant contribution to the city. He is very involved with Big Brothers Big Sisters, hosting an annual All Star Weekend fundraiser for the organization and donating countless hours. He regularly attended numerous community events and paid visits to schools and hospitals as a member of the REDBLACKS. He was also the team’s “Tackle Hunger” representative for the three seasons that he played for the team, helping to collect thousands of pounds of food for those in need. Burris remains a big part of the community in his new role as host of CTV morning Live in Ottawa. ** ** ** Quotes ** “Since the moment he arrived here, Henry Burris has been committed to the City of Ottawa. Henry is a wonderful role model and community leader, and his many contributions – both on and off the football field –have made, and continue to make our city an even better place to live in.” _ Ottawa Mayor Jim Watson _ “It’s truly an honor to be recognized by Mayor Watson for this prestigious award. I believe you can overcome anything in this world with love and support. The City of Ottawa has given that to me and my family. We will be forever grateful!” _ Henry Burris _ _ _ ** Key Facts ** ** The Key to the City **

For more information on City programs and services, visit ottawa.ca or call 3-1-1 (TTY: 613-580-2401). You can also connect with us through Facebook , Twitter and Instagram . _ Clarification: This news release as written by the City of Ottawa originally said Burris played for his “home state’s Temple University.” It has been amended to remove “home state” and further clarify the location of the university as being in Pennsylvania, not Burris’ birthplace of Oklahoma. _

[caption id="attachment_78806” align="aligncenter” width="1000”] A mosaiculture display at MosaiCanada. (Glen Gower/OttawaStart.com)[/caption] _ (Via MosaïCanada) _ GATINEAU, Saturday September 9th, 2017 – It was at Jacques-Cartier Park in Gatineau at 1:45 PM today that the millionth visitor crossed the gates of MOSAICANADA150 / GATINEAU 2017. ...

_ (Via Environment Canada) _ Conditions will be favourable for the development of funnel clouds today. Scattered thunderstorms across Southern Ontario will continue into this evening. Some of the thunderstorms will bring dime sized hail, wind gusts to 70 km/h and frequent lightning. ...