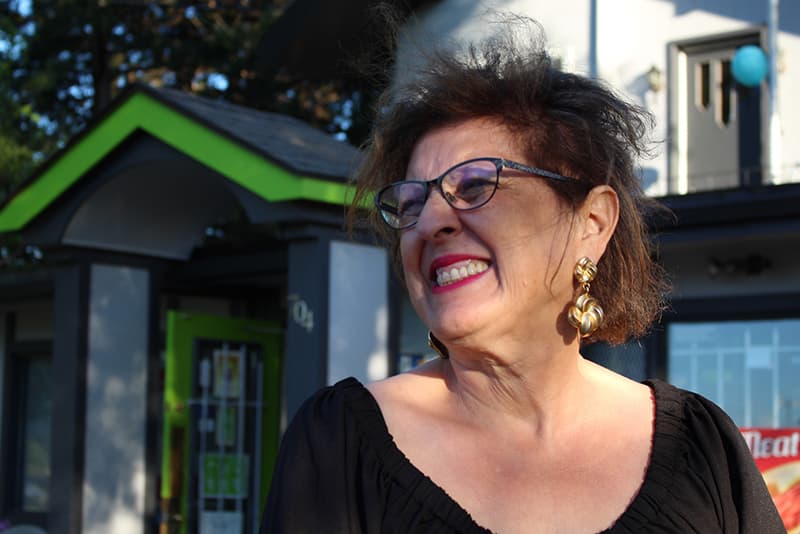 Joyce Aboud smiles in front of the Brookfield Restaurant and Confectionary during its 50 year anniversary on Saturday. (Charlie Senack for OttawaStart.com)[/caption]

July 1 was the 150th anniversary of Confederation, but it also marked 50 years of the Brookfield Restaurant and Confectionary in Riverside South.

“My mom and dad came from Lebanon, moved to Sarnia, Ont.,” said Joyce Aboud, one of their daughters who is now the owner. “We had family and kinda scouted out Ottawa thinking that this would be a good place to settle.”

Residents gathered to relive the memories of years past at an anniversary party on Saturday.

Craig and Carolyn Searle, who have lived in the area for years, wanted to celebrate how much the restaurant has done for the community.

“It’s been a locally owned family run restaurant, and it’s been wonderful,” said Craig, president of the Riverside Park and Community Association. “They give back to the community.”

The restaurant is down the road from Brookfield High School and has been a popular spot for students to get a bite to eat for years – some former students even turned out, causing Carolyn to compare the event to a high school reunion.

“We have had pretty much something for everybody today,” said Craig.

Now, the restaurant is hoping to serve the Riverside community for another 50 years.

“I’m pretty proud, it’s an accomplishment (that) came with a lot of work,” said Aboud. “Once you walk through the door, you’re a part of the family.”

The Ottawa summer pastime, the Changing of the Guard, occurs every day at 10 a.m. on Parliament Hill from early July until late August. The old guard marches onto the lawn to be relieved of duty by the new guard, which enters via Wellington Street after marching from the Cartier Square Drill Hall near City Hall. ...

Come visit us and take a step back into medieval times! The ** Osgoode Medieval Festival ** celebrates its tenth anniversary in high fashion, promising a little bit of fun for everyone! Come and witness daring sword fights, mesmerizing dancing, birds of prey demonstrations and much more! ...