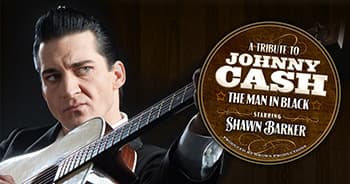 Close your eyes and imagine the unique sound of Johnny Cash, as if it were live and for the first time in the early 1960’s. Now open your eyes and experience this great singer songwriter recreated on stage in the hit musical tribute, The Man In Black, A Tribute to Johnny Cash.

The Man In Black Show offers a retro look, sound and feel into the performance of American Icon Johnny Cash. The show delivers the raw prowess that made Johnny Cash a 20th century pop culture figure, while capturing his ability to cross musical genres, age and ethnic barriers to bring a classic sound that is immediately recognized. The show also features hits made famous with June Carter Cash and goes beyond the look of a younger Cash to feature his music right up to his death in September of 2003.

Widely acclaimed by the general public and critics alike the star of The Man in Black Show, Shawn Barker, is considered as the pre-eminent Johnny Cash tribute artist as well as an accomplished musician and singer songwriter. Having an uncanny resemblance to the younger Cash, his portrayal is stunningly accurate and remarkably authentic. ** Shawn Barker ** Shawn Barker hails from the St. Louis Missouri area. A former carpenter, Shawn started his musical career as an Elvis Tribute Artist. Although Shawn drew success through his Elvis act, he soon realized that in a market saturated with Elvis acts; he could only go so far.

Auditioning for the part of Elvis in a Hollywood production of “The Million Dollar Quartet”(the famed SUN Records recording artists Elvis, Johnny Cash, Carl Perkins, and Jerry Lee Lewis) the director asked Shawn to also send video of him portraying the other ch-aracters in the script. Shawn did and was instantly cast as Johnny Cash. This started a one-year character study of Johnny Cash, his life, music, voice, and stage presence. Shawn ended up turning down the role because of scheduling conflicts.

During this same time while performing in an all Elvis tribute show, Shawn suggested to the producer that he throw a twist into the show and come out as Johnny Cash. The producer immediately recognized Shawn’s calling in portraying the Legendary Johnny Cash and cast him in an upcoming all country tribute show.

So impressed by his performance, the producer then created and scripted a show for Shawn called; The Man In Black Show, which is now drawing great success throughout North America, with shows performed and booked into numerous venues.

Shawn plays guitar and harmonica and has tour in The Man In Black Show since 2005 as well as making special appearances in multi-act tributes throughout North America. Shawn is currently completing his first recording CD of original music soon to be released to the public.

Shawn had the opportunity to travel to Australia to perform as Johnny Cash as well as working with W.S. “Fluke” Holland, Johnny Cash’s drummer of 40 years. Besides touring across the United States, Shawn and The Man In Black Show have been performing in Quebec Canada throughout the summers of 2009 through 2013. The show has sold more than 250,000 tickets in Quebec City alone and is schedule for a return to Quebec for the summer of 2014. ** Ages: ** All ages ** Language: ** English ** Tickets (all-in price): ** Regular: $54 Click here for tickets 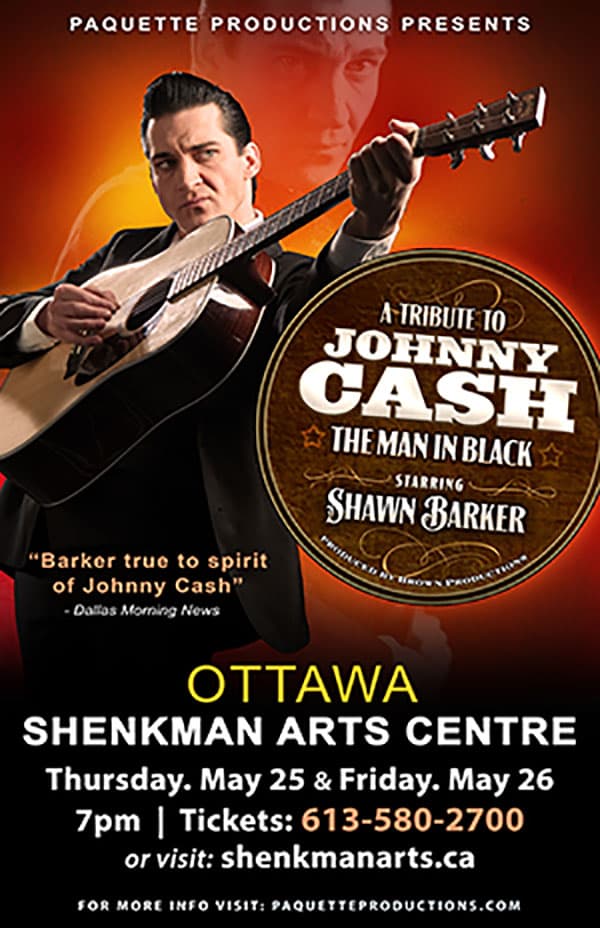 The Vimy Brewing Company opens its doors at 4 p.m. on Wednesday. They’ll have their three ales on tap and the Ottawa Senators vs. Pittsburgh Penguins on their 80” TV at 8 p.m. ** The Kitchissippi Times has more… ** ...