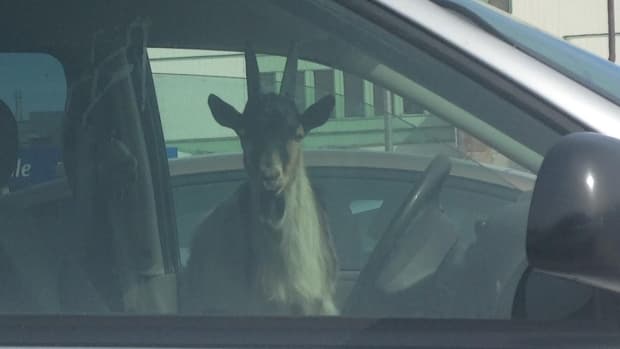 The bizarre race between two Ottawa news organizations to find out why this goat was in a parked car speaks volumes about news to get clicks. (Ann McNab)[/caption]

If ever you need an example of what’s wrong with modern journalism that aims to get clicks, look no further than this week’s race between the CBC and _ Ottawa Citizen _ to find out why there was a goat behind the wheel of a parked car.

In an era of dwindling news resources, this ridiculous competition says a lot about what’s driving media these days – “2,111 shares” on CBC’s sidebar says it all.

This is not to say it was not a worthwhile story. In fact, the _ Citizen _ eventually got ahold of the owner and learned that the goat, Chauncey, is a therapy goat.

That was the real story and one the _ Citizen _ did have a thorough update on. The CBC simply added a small update to their online story.

The sensational way this story was covered was a failure.

The _ Citizen’s _ headline – Did this goat drive itself to the Ottawa Hospital? The CBC’s headline – You’ve goat to see it to believe it. Oh, and then the goat visited CBC Ottawa:

https://twitter.com/eskura/status/841778280143413248 _ Give us a break. _ Perhaps if just one organization covered this, it would be been manageable. But having two of the most respected sources jumping on this was just silly.

To be fair, Brian Platt, the _ Citizen _ editor who wrote the original story, said it was only supposed to be innocent fun.

“It wasn’t a race, at least not from our point of view,” he wrote in a Twitter DM. “The Citizen was directly sent a few photos that made us laugh. We put them up with the lede ‘here’s your amusing Ottawa image for the day,’ and invited people to leave their theories for why the goat was there.

“The goat’s owner later left a comment, and gave a backstory that was more interesting than I ever would have imagined. I talked to him on the phone, got a few more details and photos, and wrote an update on the post.

“The post went up at 2:30 p.m. or so, I updated it at 7 p.m. or so, and that’s all we did. For a story that was so simple and easy and quick to do, readers absolutely loved it, as you can see from the reactions. In the meantime, our city reporters were working their beats as they always do.”

In 2017, trust in the press continues to evaporate along with its revenues. Reporters likely weren’t motivated by the the bottom line with these stories, but journalists today need to be extra careful that they don’t give that impression to their audience.

_ ** THE MOST ANTICIPATED ELVIS EVENT OF THE YEAR RETURNS! ** _ Back by popular demand! Paquette Productions is happy to announce the return one of the most successful Elvis shows of the year, A Tribute to Elvis in Concert, featuring two of the world’s most coveted Elvis Tribute Artists known today: Pete Paquette from Toronto and Chris Connor from the United Kingdom. ...

_ (Via Ottawa 2017) _ ** Ottawa – ** The Ottawa 2017 Bureau and Mayor Jim Watson are thrilled that an NHL centennial outdoor game will be held in Ottawa on Saturday, December 16, 2017, and congratulate the NHL for bringing this prestigious sporting event to Canada’s capital for the first time. ...