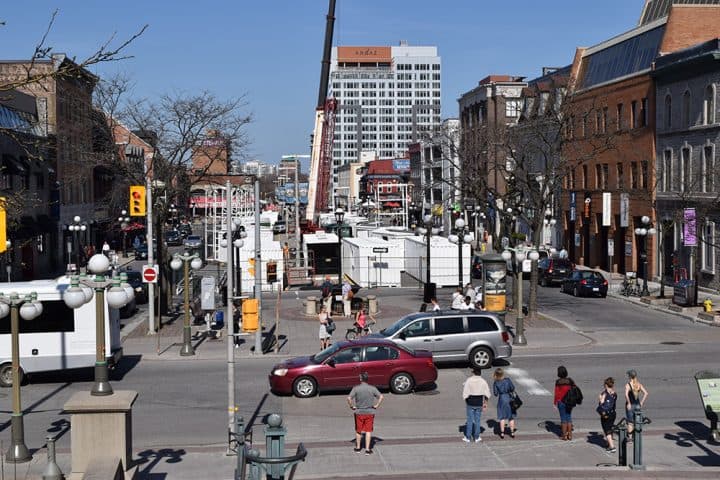 There has been blowback recently over potential loss of parking spaces in Ottawa. (Devyn Barrie/OttawaStart.com)[/caption]

“But what about the parking?”

That seems to be the common response in Ottawa whenever there is a development or change that would incidentally threaten the availability of parking spaces, as happened twice in recent days.

First it was Spencer Street. The plan to paint in bike lanes on the road in exchange for 97 on-street parking spaces was met with stiff opposition from residents.

The reasoning by Jeff Leiper, the area’s city councillor, in favour of the lanes was that Spencer Street is an ideal connector route for cyclists and the lanes would make it safer for all road users.

Arguments against the idea, as reported in the _ Ottawa Sun _ , were a little on the weak side.

One was Spencer Street is already safe enough for cyclists. Is that really a reason to say no to bike lanes?

And clearly the loss of on-street parking could not have been a threat to businesses, because the 600-metre length of road between Holland and Western Avenues is residential.

A study done by the city found there is low demand for parking on the street. It seems the residents just liked having it, but it’s questionable whether the space was really necessary.

Leiper did what a councillor ought to do, however, and dropped the proposal after receiving feedback from his constituents.

The issue came up again with the installation of Ottawa 2017’s Inspiration Village, a public square made out of shipping containers that will be used to host performances and exhibitions.

Partly thanks to the city’s silence on the matter, it was believed that 92 parking spaces would be lost in the ByWard Market because of the village. Ottawa 2017 Executive Director Guy Laflamme told _ OttawaStart.com _ the parking space was compensated for elsewhere, although it’s not clear where.

Whether or not parking spaces were actually lost, the reaction was surprising. Some people seem to value parking more than what holds promise to be a very nice public square – and all the events that will take place in it.

We ran a Twitter poll that received 70 votes, with 41 per cent ranking the parking spots as more important. Non-scientific indeed, disappointing nonetheless.

For the record, the BIA is cool with Inspiration Village. Normally one would expect a BIA to be vehemently opposed to even the slightest inconvenience for patrons of nearby businesses.

Because in Ottawa, the idea of walking a few extra blocks is apparently unacceptable. Taking transit is a notion too heinous for consideration.

Ottawa should give up its unhealthy obsession with parking and try to stretch its legs. – _ Devyn Barrie, managing editor. _ _ Agree or disagree? Drop us a line at feedback@ottawastart.com or comment below. Letters may be edited for style and clarity. _

[caption id=“attachment_67071” align=“aligncenter” width=“720”] A figure skating performance in honour of Teslin Russell on Friday. Russell died of a drug overdose on Dec. 31, 2016. (Charlie Senack/OttawaStart.com)[/caption] _ Charlie Senack – Special to OttawaStart.com _ Hundreds packed a Kanata arena Friday for a tribute in honour of Teslin Russell, a teen whose overdose death served as one of the wake-up calls for the Ottawa opioid crisis. ...

[caption id=“attachment_67020” align=“aligncenter” width=“1000”] Ottawa 2017’s executive director says parking spaces on York Street were re-accommodated as Inspiration Village takes over this month. Shipping containers being installed on Thursday, April 27. (Devyn Barrie/OttawaStart.com[/caption] The 92 parking spaces taken up by Ottawa 2017’s shipping container extravaganza do not represent a net loss of parking in the ByWard Market, because the city was able to shift them elsewhere, Ottawa 2017 Executive Director Guy Laflamme said. ...