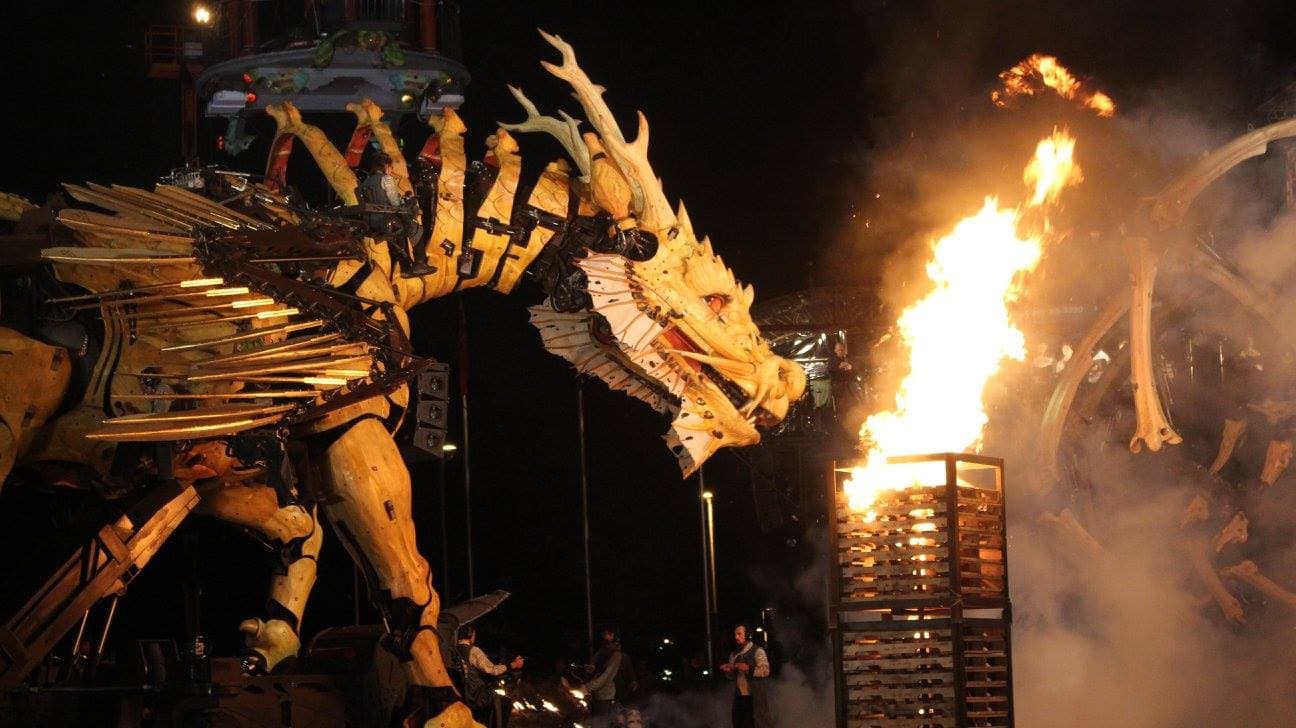 Long Ma during a final battle with Kumo, the spider, in La Machine on Sunday. The performance proved enormous benefit to nearby businesses thanks to the thousands who turned out to watch it. (Charlie Senack for OttawaStart.com)[/caption]

We regret to be the bearer of bad news: It is simply not feasible to have massive mechanical creatures skirmish across the city each weekend, but it would sure be great.

In addition to the fantastic entertainment and tourism value, La Machine was nothing short for a windfall to local businesses. And with a crowd cume of about 750,000 people over four days it’s no surprise a few places in the ByWard Market even ran out of food, as reported by _ CTV Ottawa _ .

What La Machine did was provide a blueprint for business that could be replicated – without the need for fire-breathing dragons, too.

Removing cars from the ByWard Market equation was not a problem. People came in huge numbers for La Machine and stuck around.

Of course, roads weren’t all closed the entire weekend, but long enough to prove this can work, as Coun. Jeff Leiper concurs in his blog .

Give people a reason to come and they will. How they come is irrelevant – if the road isn’t open to cars, they’ll simply bike, walk or take transit et al.

The immense success of La Machine is probably not possible to reproduce at the same scale, but there are still many reasons people will come to the ByWard Market.

The businesses themselves are often good enough reason. There’s also Inspiration Village, full of exhibits and performances until September. There’s also plenty of events (such as Potatofest on Thursday.)

Closing roads to cars doesn’t kill customer flow, it improves it. People like to walk and they will take more pleasure in it when they have more room to do so.

[caption id=“attachment_74579” align=“aligncenter” width=“1000”] The first annual Somali Cultural Festival was held Saturday at city hall. It featured a fashion show of traditional clothing, as well as Somali food and music. (Devyn Barrie/OttawaStart.com)[/caption] There is no runway inside city hall, but with cameras flashing and an attentive audience, it still made for a tidy fashion show. ...

[caption id=“attachment_74597” align=“aligncenter” width=“1000”] From left: Natalia Whitia, Aaron Osborne, and Audrey Scanlan are students attending SHAD at Carleton University. (Charlie Senack for OttawaStart.com)[/caption] Wiping away tears, 60 high school students from across Canada said goodbye after a month of learning together, as they returned home with a new look on life. ...