The secured area downtown has shrunk, and more businesses/services are returning as the weeks-long Ottawa occupation draws to a close.

On Tuesday, the City of Ottawa announced several service resumptions in the area, to come this week:

All Queensway exits have re-opened. Traffic delays will continue, and the city advised residents traveling through the secured area to carry ID with them. 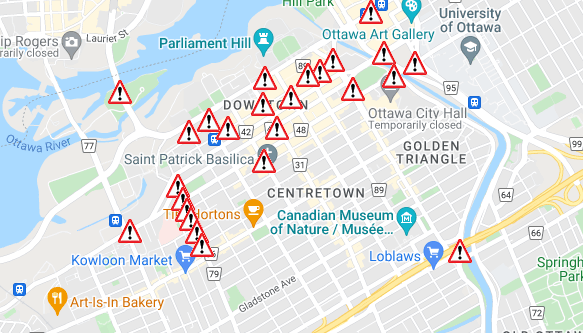 Other organizations and businesses have said they will resume operations that had been put on hold due to the occupation. The University of Ottawa resumed all scheduled in-person activities on Monday. Several restaurants, including Bar Robo, North & Navy and Moo Shu Ice Cream announced re-opening plans for either Tuesday or Wednesday. The ByWard Market was open as of Tuesday. Rideau Centre was too, but a scare that turned out to be a shoplifter with a fake gun prompted its evacuation in the afternoon.

At City Council on Wednesday, a number of measures to assist impacted residents and businesses were proposed. These include targeted property tax deferral, no-charge parking for a month in the area, and an expansion of no-fare transit service that will include all routes serving the affected area.

The police operation to remove occupiers continues, but "the worst I believe is behind us", said Mayor Jim Watson at Wednesday's session of council. A recent count put the number of people arrested at 191, and 107 people were charged with acts including obstructing police, disobeying a court order, assault, possessing a weapon or assaulting police. Since January 28, some 3700 parking tickets had been issued.

First day of the Rideau Canal skating season (2015). Photo by James Peltzer via the OttawaStart Flickr pool. (Via NCC) The National Capital Commission (NCC) is pleased to announce the official opening of the 52nd season of the Rideau Canal Skateway at 8 am, Friday, January 14, 2022. ...