_ (press release) _ Residents and businesses are advised that as a result of the North American Leader’s Summit on Wednesday, June 29, there will be significant traffic impacts to roads, as well as waterways and airspace for the duration of the visit.

The City is working in close collaboration with the Royal Canadian Mounted Police, the Ottawa Police Service and all partners to ensure the security of Ottawa residents and to mitigate traffic congestion.

Information about road closures and the resulting impacts to traffic are available on this web page and will be added during the day of the Summit (June 29). Follow us on Twitter for the most up-to-date information leading up to, and during, the Summit. Additional information about the Summit is available on the Federal Government’s website. ** Traffic impacts ** Road closures, detours, and parking restrictions will be in effect on June 29 downtown and around the Ottawa Macdonald-Cartier International Airport as a result of the Summit.

Motorists are advised to plan their travels accordingly and to avoid the downtown area if possible. For those residents who must enter the core on June 29, consider other options such as transit, walking, cycling or carpooling.

Transit customers will be able to check octranspo.com and the STO website for up-to-date information on detours or delays. Para Transpo customers booking for June 29 may see delays or lower availability.

Employers with staff who normally commute into the core might want to consider adopting alternative options on June 29, such as having employees work from home or implementing flexible work hours.

Impacts of motorcade for all residents:

Temporary road closures will also be in effect as the motorcade travels through the city. Delays could be greater than 30 minutes. ** Downtown impacts: ** Residents, visitors and businesses are advised that there will be both road closures and traffic delays in the vicinity of the National Gallery of Canada and Parliament Hill on June 29. 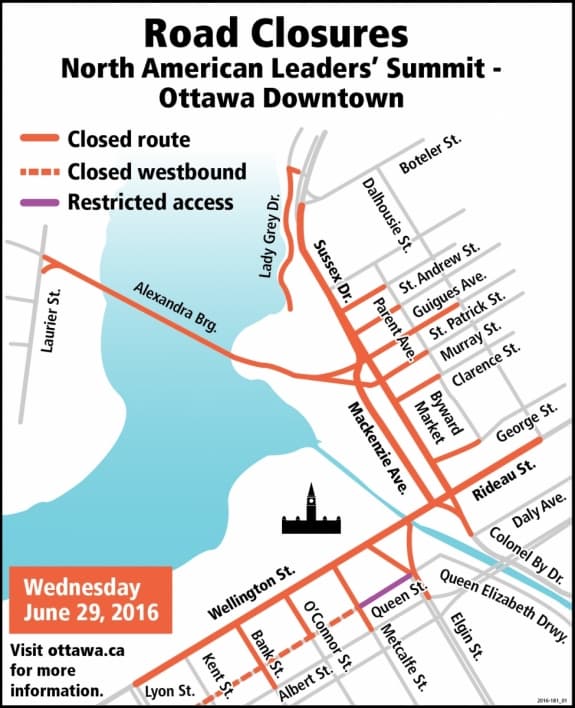 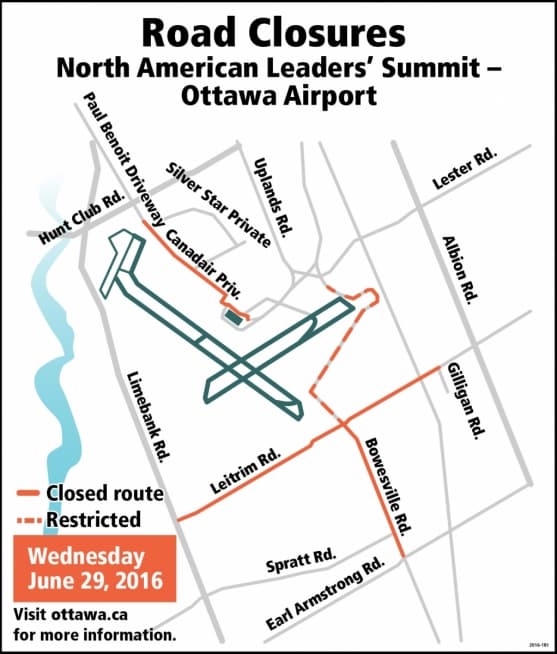 ** Morning traffic impacts: ** Road closures are planned from the Ottawa Macdonald-Cartier International Airport to the National Gallery of Canada from approximately 8 to 11 a.m. Closures will be in effect to and from the airport prior to the arrival of the motorcade and as it travels through the city. The following closures will also be in effect:

Road closures are planned from downtown to the airport from approximately 4:30 to 8 p.m. as the motorcade travels through the city. ** Waterway impacts: ** Rideau Canal 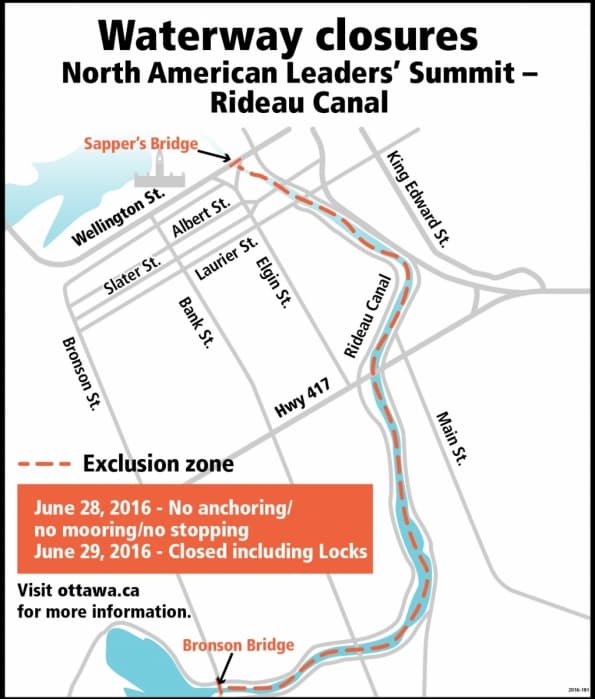 The Rideau Canal between Dow’s Lake (Bronson Bridge) and Plaza Bridge (Sapper’s Bridge, Wellington Street) will be an exclusion zone. No stopping, no anchoring and no mooring (day or night) from June 28 to 29. Exceptions will only be made for vessels mooring at the Blue Line Dock, if accepted by the Lockmaster and while waiting to use the locks. Vessels will be allowed to navigate in and through the exclusion zone all day on June 28. On June 29, no pleasure craft or commercial vessels will be allowed to navigate in or through the exclusion zone, including the Rideau Canal Locks, which are closed for the day. ** Ottawa River ** 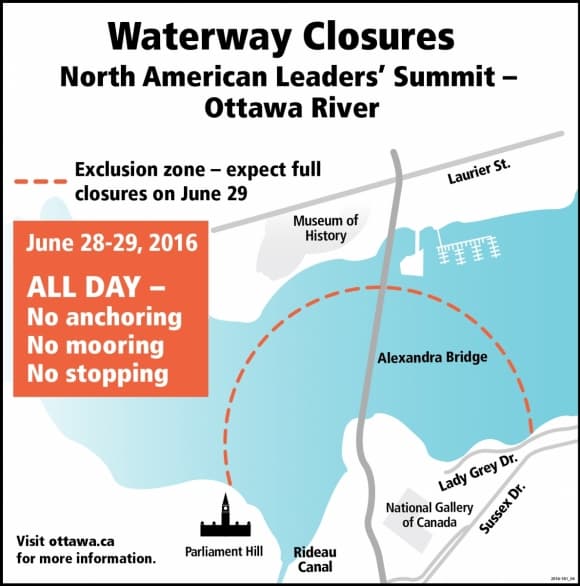 The section of the Ottawa River between the National Gallery of Canada, Parliament Hill and the Museum of History, (as indicated by the red line in the map), will be an exclusion zone. There will be no stopping, no anchoring or mooring (day or night) on June 28 and 29 (until 11:59 p.m.) within the exclusion zone. The exclusion zone will be closed to navigation intermittently through the day on June 29. During this closure, vessel traffic will not be allowed near or under the Alexandra Bridge. These restrictions apply to all pleasure craft and commercial vessels. The water taxi liaison service between Ottawa Locks’ dock, the Museum of History and other water taxi stops should not be affected as long as the water taxis remain outside of the exclusion zone. ** Impact on other City services: ** Waste and recycling collection impacts for Bronson Place and Echo Drive

As part of the security requirements, all waste, recycling and other curbside items must be removed before 7 a.m. The City of Ottawa will deploy a fleet of waste and collection trucks to those neighbourhoods around 5 a.m. As a result, residents in the affected areas are asked to place their waste and recycling at the curb the night before (June 28). In keeping with the security measures, emptied recycling, waste and green bins will be placed near porches or doorsteps by waste collectors. Residents who are unable to put their recycling and waste out for collection, please call 3-1-1 and a special truck will collect your waste on the following day (June 30).

_ (press release) _ Ottawa Fire Services received a 911 call at 2:44 a.m. reporting a roof on fire at 1263 Bayview Road in the area of Bishop Davis Drive in Constance Bay. The house was fully involved in flames and the roof collapsed which prompted a defensive attack from Ottawa Fire Services crews on scene. ...

_ (press release) _ Ontario is undertaking a review of the scope and effectiveness of the Ontario Municipal Board (OMB), an important part of the province’s land use planning system. The OMB is an independent tribunal that makes decisions at arm’s length from the government on appeals and applications under a number of statutes, with most of its current caseload coming from the Planning Act. ...