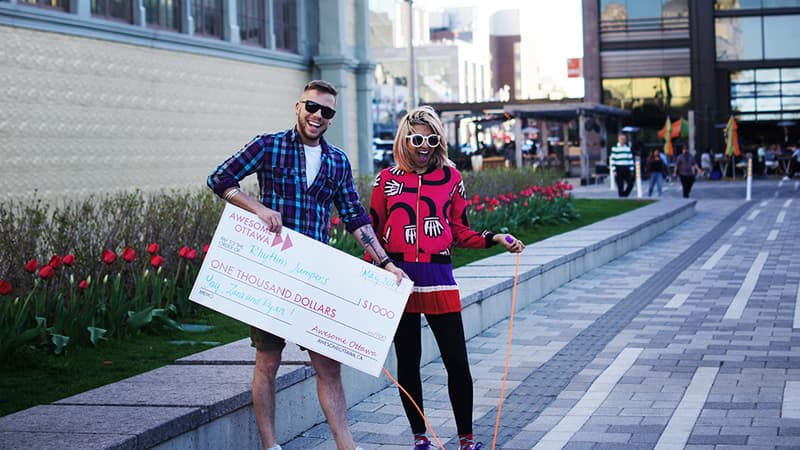 Ryan Mason, left, and Zara Ansar are planning a large skip rope party in Lansdown Park on June 3. They received a $1,000 microgrant from Awesome Ottawa to fund it. (Awesome Ottawa)[/caption]

Remember the days of yore when carefree recesses were spent on the schoolyard with friends, playing foursquare and tag and double dutch?

Zara Ansar and Ryan Mason do – and they’re hoping to bring some of that nostalgia back for a day by organizing a skipping rope party at Lansdowne Park on June 3, from 1-4 p.m. in front of Jack Astor’s and the Aberdeen Pavilion.

“We were just reminiscing about the activities we used to do as kids,” Mason said in an interview. “We thought about maybe bringing it back in a way that’s accessible.”

With a $1,000 microgrant from Awesome Ottawa, the two friends were able to order 60 skipping ropes, enough for 30 double dutch groups. They’re also making arrangements for popsicle vendors and some music to create a lively atmosphere. Microgrants are a popular way to give community-level projects a nudge and Ansar said Awesome Ottawa gave them a “perfect amount” to make it happen.

“I’ve been sitting on this idea for five years,” she said. “I think a week before (the grant application) was due I said ‘OK, we’re doing this’.”

If all goes well they hope to throw more skipping parties in other communities around the city.

Besides the nostalgia, one of the reasons they wanted to organize the party is to give people a way to have fun exercising.

“Originally I was going to do a bike parade,” Ansar, who runs a blog about bicycles , said. “But I decided I want to do something a little different.”

The June 3 event is part of 100in1Day, a festival run by Ottawa civic engagement group Synapcity .

It’s taken place since 2012 in other cities and it’s the first time it will be in Ottawa, said Christine Earnshaw, 100in1Day project manager.

“The goal is to engage people, to make the city better in whatever way they would like (it) to,” Earnshaw said. “It really helps to animate our parks and (our public spaces).”

As of Tuesday, there were 15 registered events with another 20 expected. They are accepting registration until the last minute.

Events are run solely by the organizer and Synapcity’s role is coordination, she said.

There is a wide range of events planned for June 3.

“The idea is that it’s fun and spontaneous.”

Some include a public living room that will be set up outside All Saints Church at 317 Chapel St., by Blink Gallery, where people can sit down and make conversation and exchange ideas.

In another event, a chaplain will set up a listening booth on Jasmine Crescent to talk to residents about whatever they want – including concerns over violence there , Earnshaw said.

As for an expected outcome, you’ll need to use your imagination.

“Imagine the way Ottawa could be,” Earnshaw said.

_ (Via City of Ottawa) _ ** ** Ottawa ** ** – Today, after several months of discussion, Mayors Jim Watson and Maxime Pedneaud-Jobin announced an agreement between Ottawa and Gatineau that will better integrate the regional transit network. The Mayors were joined by Councillors Gilles Carpentier, Chair of the STO, and Stephen Blais, Chair of the Ottawa Transit Commission. ...

_ (Via Ottawa Police) _ (Ottawa) - The Ottawa Police Service would like to advise the community that Ms. Karbisheva was located deceased this early afternoon in a wooded area in Stittsville. No foul play is suspected. Her dog was found safe by her side. ...