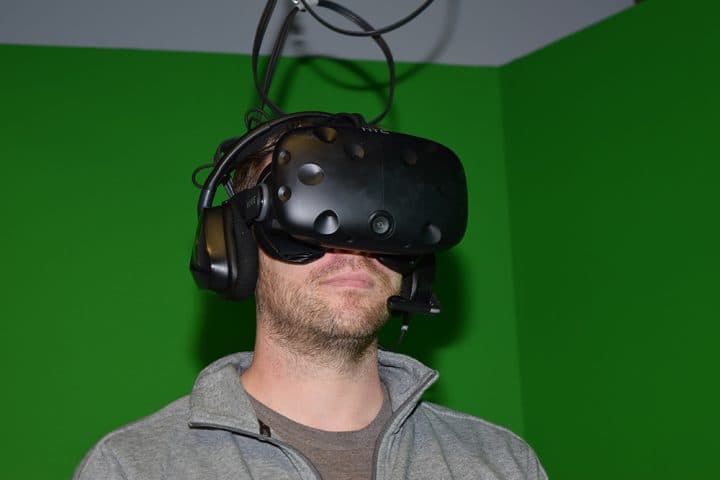 A stand-up comedy show will be filmed in Ottawa using VR technology, for people to watch on their phones with special headsets. The phone technology is a dialed-down version of what this man is wearing at Ottawa VR parlour Colony VR, which is sponsoring the event. (Devyn Barrie/OttawaStart.com)[/caption]

Watching stand-up comedy on YouTube is one thing, but one comedian is hoping to make virtual reality stand-up the next big thing in Canada – starting with a first taping in Ottawa on Monday.

Absolute Comedy on Preston Street will host Absolute 360, the inaugural recording for a new app by Montreal-based VR company Virtual Boyz. The firm plans to regularly film shows across Canada to distribute in VR format.

VR is a boon for the craft, said comedian and show producer Rodney Ramsey, a partner in the company, because it allows those watching at home to “feel the vibe of the room.”

“You feel like you’re sitting down in the crowd,” he said in an interview last month.

Virtual reality has been employed previously to tape stand-up shows, but its use is not widespread yet. “This would be the first of its kind, regular filming for an app,” Ramsey said.

The app, called Virtual Reality Live, will be launched over the summer on the Samsung Gear VR store and will be available for Oculus Rift and Samsung VR headsets. Free content will be uploaded to YouTube and Facebook , which are compatible with VR video.

The technology has come far since he first got involved in VR and taped his first show with the format a year and a half ago.

“You’d have to get six GoPros and stitch them together,” he said. Then, there was complex editing required.

The show on Monday will be filmed with a single specialized VR camera.

“I waited until the tech was available for laymen like myself.”

“We got some local comics,” he said, “We (also) got some acts from Montreal, where I’m from,” Ramsey said.

He chose Absolute Comedy to host it because he likes their management, he said. Coincidentally, the club is a block away from Ottawa VR parlour Colony VR, which is sponsoring the event.

Another reason to tape in Ottawa – Ramsey said the crowds here are great.

_ (Via Ottawa Police) _ (Ottawa) - The Ottawa Police Service would like to advise the community that Ms. Karbisheva was located deceased this early afternoon in a wooded area in Stittsville. No foul play is suspected. Her dog was found safe by her side. ...

** Related: What’s open and closed in Ottawa on Victoria Day weekend ** Looking for something to do in or around Ottawa this Victoria Day long weekend? _ OttawaStart.com ** ** _ has you covered! Got a suggestion? Tweet them at us @OttawaStart or comment below. ...