_ (press release) _ ** Ottawa ** – The unique design of the future O-Train Confederation Line’s Pimisi Station, which celebrates the culture of the Algonquin people, was unveiled today during a construction site tour attended by The Honourable Amarjeet Sohi, Minister of Infrastructure and Communities; The Honourable Yasir Naqvi, Attorney General and Member of Provincial Parliament, Ottawa Centre; and, Mayor Jim Watson, as well as other disguinished guests. 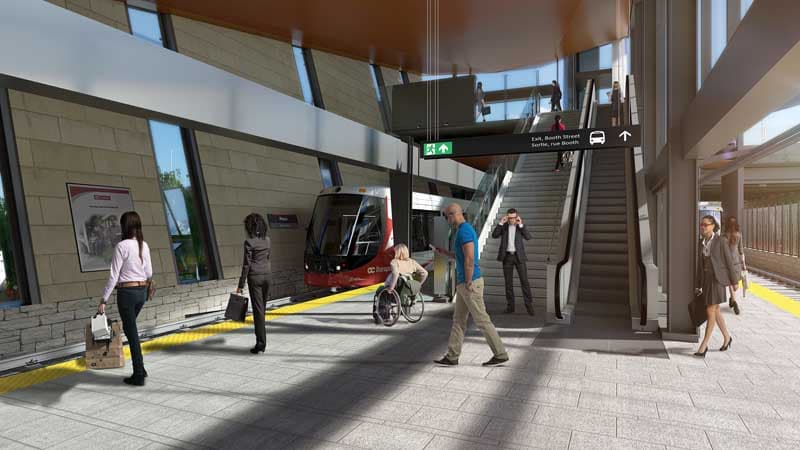 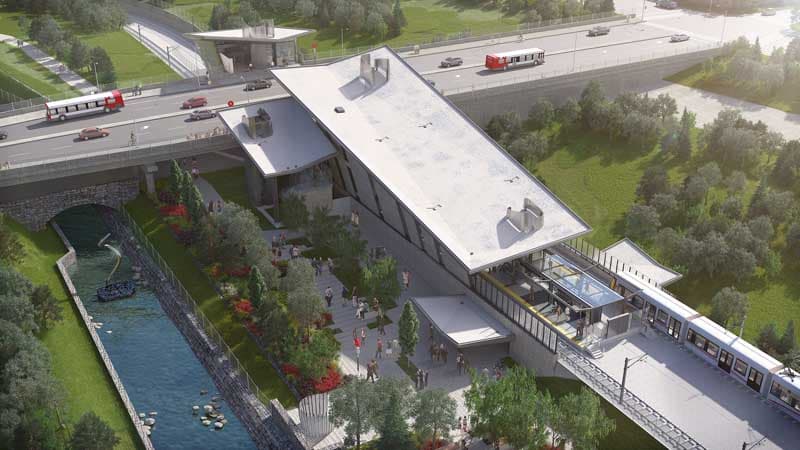 “As a former Edmonton bus driver and City Councillor, I know how important affordable and efficient transit infrastructure is to allow Canadians to get to work on time and back home at the end of a long day,” said the Honourable Amarjeet Sohi, Minister of Infrastructure and Communities. “Public transit infrastructure is what connects people to their communities and allows them to be active participants, both socially and economically. The Confederation Line is a vital public transportation project that will make Ottawa a stronger, more inclusive and sustainable city.”

“Pimisi Station will offer easy connections to existing bus service and it will also serve as a significant transfer point for riders travelling to and from Gatineau,” said MPP Yasir Naqvi. “Construction on the O-Train Confederation Line continues to boost our economy and provide quality jobs.  Pimisi Station will also beautifully showcase our rich Algonquin heritage and the history the Algonquin peoples have built in our City. This truly is a ‘connecting’ station, bringing our Indigenous history and modern needs together."

“Once completed, the O-Train Confederation Line will be one of the most advanced and innovative transit systems in North America and will be the foundation for the City’s planned transportation network,” said Mayor Jim Watson. “The design of Pimisi Station revealed today is unique in that it will be a special reminder to residents and visitors alike of the significant impact of the Algonquin people’s culture and heritage in this area.”

The design of Pimisi Station was developed in consultation with the Algonquin Nation and will incorporate an Algonquin cultural theme, reflecting both their historical and contemporary significance. The public artworks at the station are being created by Algonquin Anishinabe artists and will celebrate the art, culture and heritage of the Algonquin people.

The naming process for the station also involved the Algonquins of Ontario who chose the name “Pimisi”, meaning “eel” in the Algonquin language, which carries a sacred significance as it is a source of spirituality, medicine and nutrition.

Located beneath and west of the new Booth Street Bridge, Pimisi Station will be a three-level station and will offer easy connections to bus service along the Booth Street Bridge. With its location near the Chaudière Bridge, it will also serve as a significant transfer point for customers travelling to and from Gatineau.

Ideally situated as a key point of access for the anticipated redevelopment of LeBreton Flats, Pimisi Station will be at the heart of an extensive redevelopment of Booth Street. It will provide residents and visitors with easy access to the War Museum, surrounding green spaces that host major festivals, and the shops and restaurants of Chinatown, West Centretown and Little Italy.

Features of the new station will include:

Construction of Pimisi Station began in January 2016 and is anticipated to be completed by fall 2017.

The O-Train Confederation Line is a $2.1-billion project that is jointly funded by the Government of Canada, the Province of Ontario and the City of Ottawa. The Government of Canada is contributing $600 million and the Province of Ontario is contributing $600 million. The City of Ottawa will also allocate up to $161.5 million of its federal Gas Tax Fund transfers to this project, and $287 million of provincial gas tax transfers to the capital infrastructure. The remaining project budget funds will come from development charge revenues and transit reserves.

The Rideau Transit Group is the private-sector partner responsible for this first stage in Ottawa’s future rail network. The 12.5-kilometre electric light rail line will provide rapid transit between Blair Station in the east and Tunney’s Pasture Station in the west. The route includes 13 stations and a 2.5-kilometre tunnel that will reduce congestion through the downtown core, and connects to the O-Train’s Trillium Line at Bayview Station. For more information, visit ottawa.ca/confederationline .

_ (press release) _ Ontario is undertaking a review of the scope and effectiveness of the Ontario Municipal Board (OMB), an important part of the province’s land use planning system. The OMB is an independent tribunal that makes decisions at arm’s length from the government on appeals and applications under a number of statutes, with most of its current caseload coming from the Planning Act. ...

_ (press release) _ (Ottawa)—The 2015 Annual Report< [ http://www. ottawapolice.ca/en/annual- report-2015/index.asp ](http://www.ottawapolice.ca/en/annual-report-2015/index.asp) of the Ottawa Police Service (OPS) was released today as part of the June 27th meeting of the Ottawa Police Services Board agenda. “This report highlights the work the Members of the OPS do every day to keep our community safe,” said Ottawa Police Chief Charles Bordeleau. ...