Photo: The O-Train boasted improved service recently, but buses not so much. (Devyn Barrie/OttawaStart.com).

OC Transpo says measures are being taken to improve the reliability of bus service, which has been poorer in recent months. However, it’s not clear exactly when riders can expect bus cancellations and lateness to get back under control.

At the city’s transit commission meeting on Wednesday, OC Transpo staff outlined the latest data on the agency’s performance. O-Train Line 1 has consistently delivered 99% or more of scheduled service since March, excepting disruptions caused by the May 21 derecho. While the train has been doing well lately, buses are another story. March and April saw service delivery reach 98.3%, before declining in May, when the figure was 94.4%. According to the data, OC Transpo buses had performed better overall this time last year; from January to May, 2021 the buses delivered 99.2% of service, compared to 96.4% for the same period this year. (When you consider the number of scheduled trips involved for this period, seemingly small changes in this figure translate into big impacts to riders.) 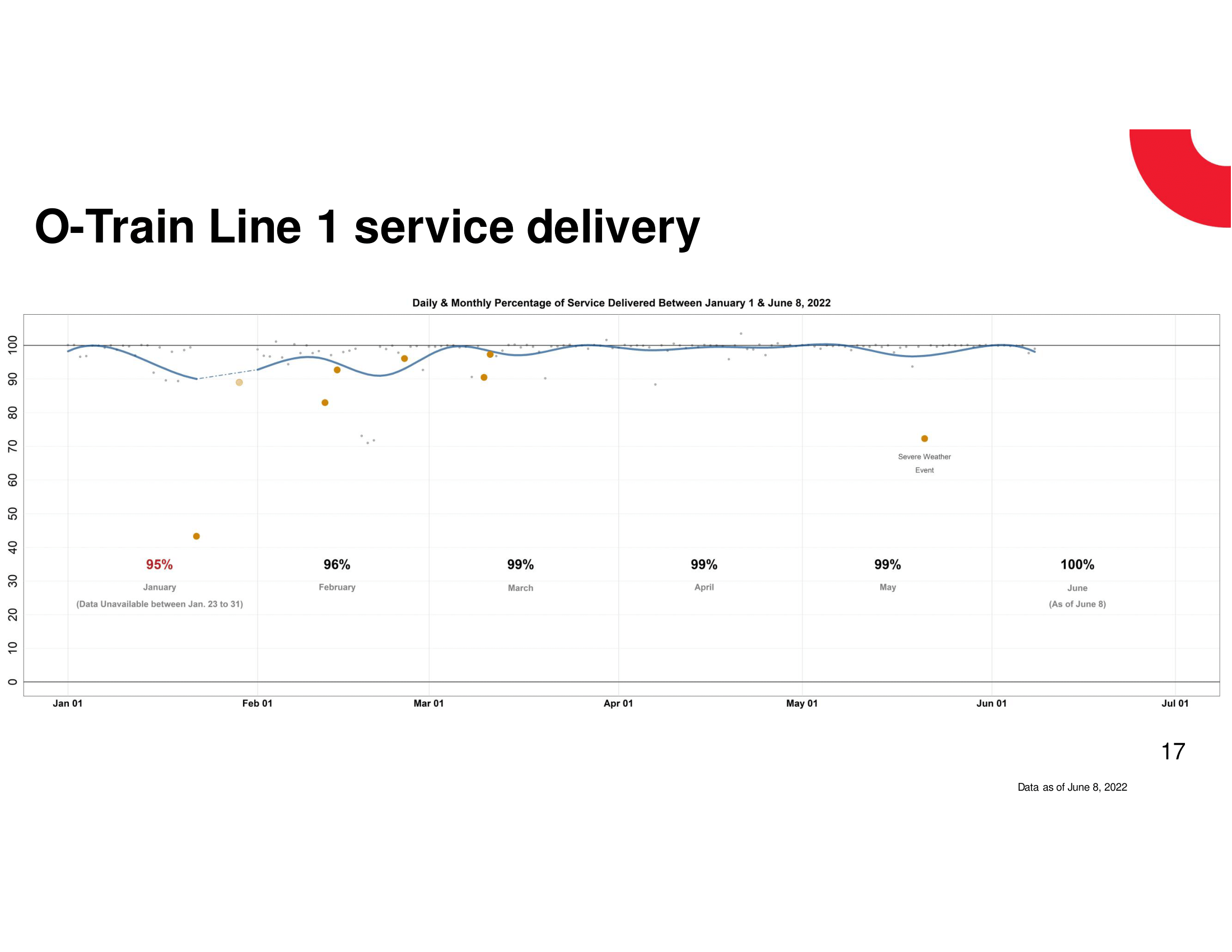 Last month, OC Transpo head Renée Amilcar identified a driver shortage as the cause of recent troubles which were resulting in as many as 300 bus cancellations per day. The shortage comes partly from job vacancies, but the main problem is a new federal rule requiring a half-hour break for every 5 hours of consecutive work.

OC Transpo has been on a hiring spree for 80 new bus drivers to ease the issue, plus another 200 to account for attrition. Troy Charter, OC Transpo director of operations, said at Wednesday’s meeting that other efforts are being made to improve service as “quickly as possible, with a key focus to September service.” He said 26 new drivers would be starting their duties that day, which is “just one of the steps in the right direction to getting those numbers back up to where we expect them, where our customers want to see them.”

Results, however, will take time to show up. The cancellation notices keep piling up and riders are being left waiting at bus stops every day. There’s something unique about the kind of frustration you feel after waiting 40 minutes for a so-called “frequent” bus to show up, on a day when the weather certainly isn’t at fault for the delay. Especially when the 40-minute wait seems to be happening an awful lot. Some people have had it much worse. While OC Transpo prefers to cancel buses on more frequent routes to minimize impact, they’ve also been cancelling buses that run a lot less frequently—I counted a few cancellations posted with the rather un-reassuring statement “next trip is 60 minutes later”.

Hopefully we don’t have to wait until September for service to get better.

Photo: Post Malone, seen here performing at the 2017 edition of CityFolk in Ottawa, Canada (Via CityFolk) CityFolk organizers today announced that they will be moving forward with a star-studded lineup of live acts for this year’s festival. CityFolk will take place on the Great Lawn at Lansdowne Park on September 8, 9, 10 and September 15, 16, 17, 2022. ...

Ian Black on the CBC, long (long) ago. (CBC screengrab) Ottawa’s go-to weatherman Ian Black retired from the CBC on Thursday, closing out his 33-year career on the air. CBC Ottawa has a story about him up now, including a video mashup with some of his many TV appearances. ...