Photo: Aftermath of a hit-and-run downtown that killed a cyclist on Thursday, May 16. (Photo/Gabriel Rivett-Carnac)

It was a hit-and-run driver that killed a cyclist on Laurier Avenue Thursday, but the underlying cause of their death was bad road engineering.

Most of Ottawa’s cycling infrastructure is so bad and such a sick joke, it was only a matter of time until another person lost their life on the road. This time it happened right in front of City Hall — so maybe it will spur some action.

Thanks to the power of social media, and the organization of some city councillors, people have taken notice. There was a rally in front of City Hall in the immediate aftermath of the crash to call for cycling infrastructure to be taken more seriously. Both there and on Twitter, we learned just how bad this section of Laurier is. 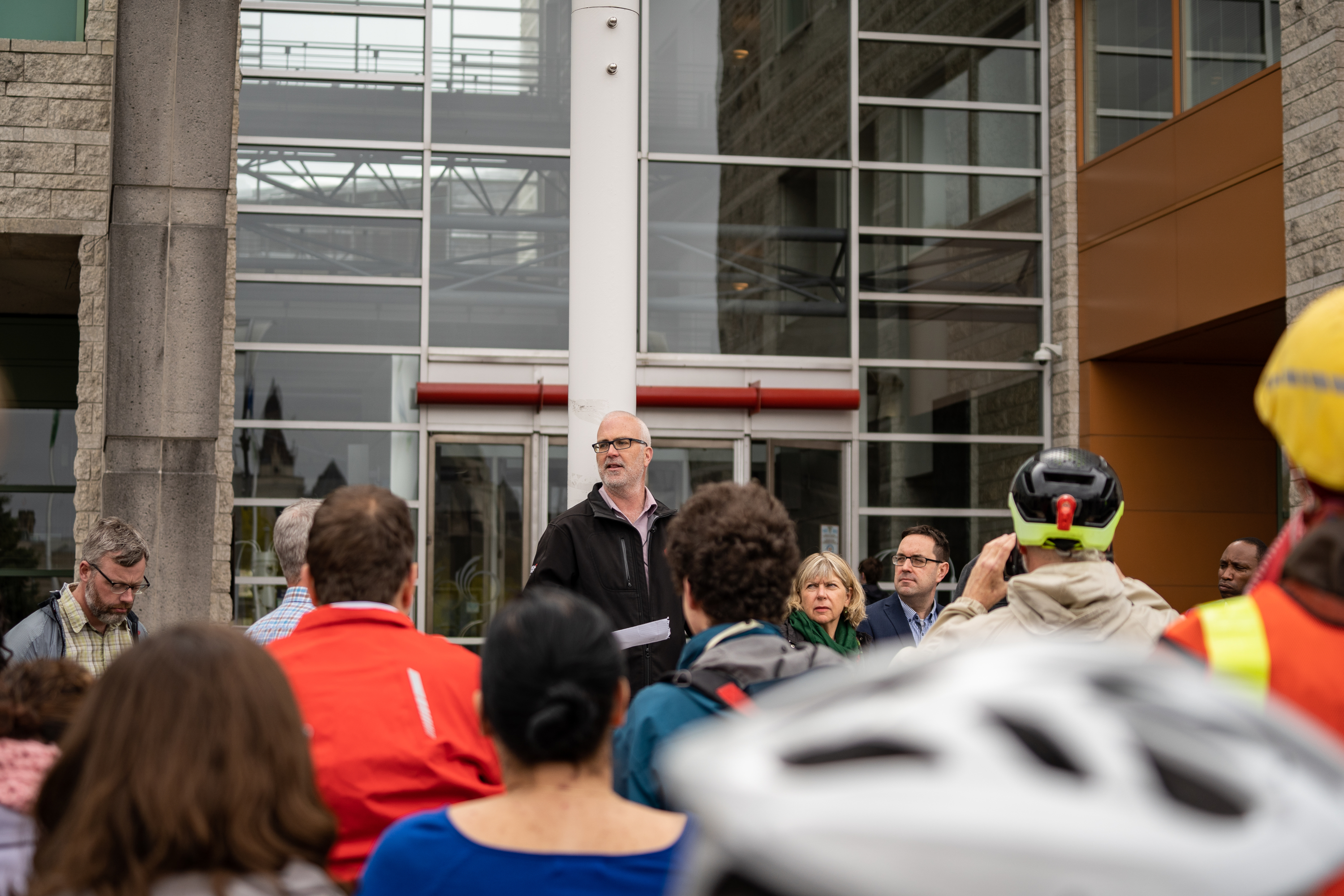 Coun. Shawn Menard referred to it as a “murder strip”, a word that apparently originated from Belgium and refers to an unprotected bike lane shared with high-speed motor vehicles. And it’s been identified in the past as a problem spot.

Sheri Frantz tweeted that she complained to the city in 2017 about the strip, which she thought was dangerous. “I wrote the City of Ottawa online via their transportation concerns submission page over a year ago about the dangers of this exact spot of bike lane. No one ever wrote me back,” she said. Ottawa journalist David Reevely also tweeted he’s ridden through that segment many times, “often with white knuckles.”

The issue isn’t all the Laurier bikeway — most of the stretch is actually quite decent and is physically separated from traffic. The cyclist on Thursday was struck on the open part of the road, sandwiched between a traffic lane and a turning lane for Elgin Street. On top of the already heavy use Laurier Avenue sees, there’s also a flow of traffic in and out of the parking garage at City Hall, and drivers merging onto Laurier from the Queen Elizabeth Driveway — a main source of the danger, Frantz tweeted. “(Drivers) speed down the ramp and might not even see a biker, and the biker has to realize the ramp is there.”

Add in the major speed differentials — the average cyclist probably goes 15–20 km/h, while that part of Laurier, as far as I can tell, has no posted limit and thus drivers could be going up to 50–60 km/h — and it becomes obvious that some green paint on the road is not enough to protect human life. The entire area is a death-trap for cyclists and that’s exactly what we saw this week.

We absolutely need drivers to acknowledge to themselves that they are controlling a two-tonne machine that can maim and kill people. But even attentive drivers are going to have accidents — this is a statistical certainty. That’s why we need to be designing infrastructure that mitigates that risk and protects vulnerable users. The City of Ottawa sucks at doing this.

I cycle a fair bit in the warmer months for both recreation and utility. I’ve never biked downtown, but have experienced much the same lack of empathy in road design elsewhere. Indeed, you don’t have to look far in Ottawa to find numerous examples of traffic engineering that’s completely hostile to cyclists.

Anytime I’m talking to someone about poor cycling infrastructure in Ottawa, I make sure to mention the murder strip bike lanes on Terry Fox Drive. I used to ride on them regularly between Hazeldean Road and Campeau Drive, about two years ago when I lived in Stittsville and worked in Kanata. These things are bad.

For a fair length, they’re at the side of the road. Not great, but OK. There are two segments where it becomes sandwiched between regular traffic and a turning lane — one of which is for a highway on-ramp. One of these exposures is about 120 meters long. Maybe that doesn’t sound like a lot, but when you’re in the middle of a high traffic-stress road where the speed limit is 70, it feels like a very long time. And it only takes a second for some driver to take you out. 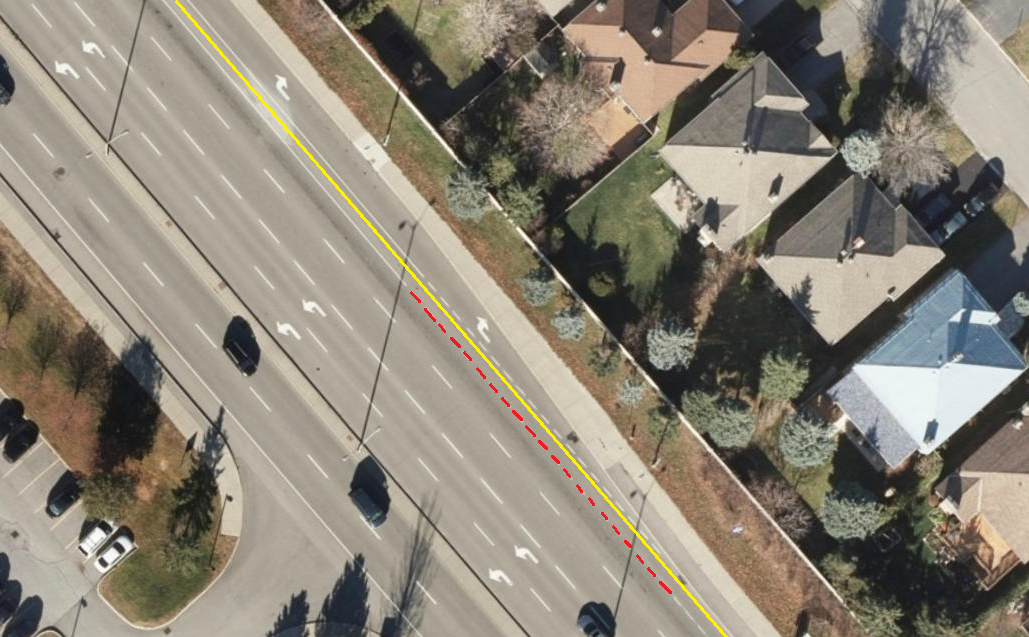 These lanes are actually quite old. They were added when Terry Fox Drive was widened sometime between 2002 and 2005, judging by city aerial photographs. But the city has been doing this rubbish more recently, too.

One example is on Heron Road, where bike lanes were added sometime between 2011 and 2014. A cyclist riding here is exposed because of turning lanes in a few segments. Although the exposure distance is less than on Terry Fox Drive, you’re still biking with cars passing at high velocities on both sides. I have biked here. It’s very stressful.

Heron Road, like Terry Fox Drive, is an LTS-4 (level of traffic-stress) corridor, meaning even experienced cyclists would feel uncomfortable riding there. The area, Confederation Heights, was identified in the 2013 Cycling Plan as a priority employment area for cycling improvements because of the Canada Post headquarters and nearby rapid transit. And this is the infrastructure they provide?

And then there’s the sharrows. These ridiculous things came to Ottawa around 2014, with the city excitedly describing them as “a new way for motorists and cyclists to share the road.” Although the city calls them cycling “facilities”, mainstream thinking in the Ottawa cycling community is that they are not a form of cycling infrastructure and do very little to change the status-quo on car-centric roads. 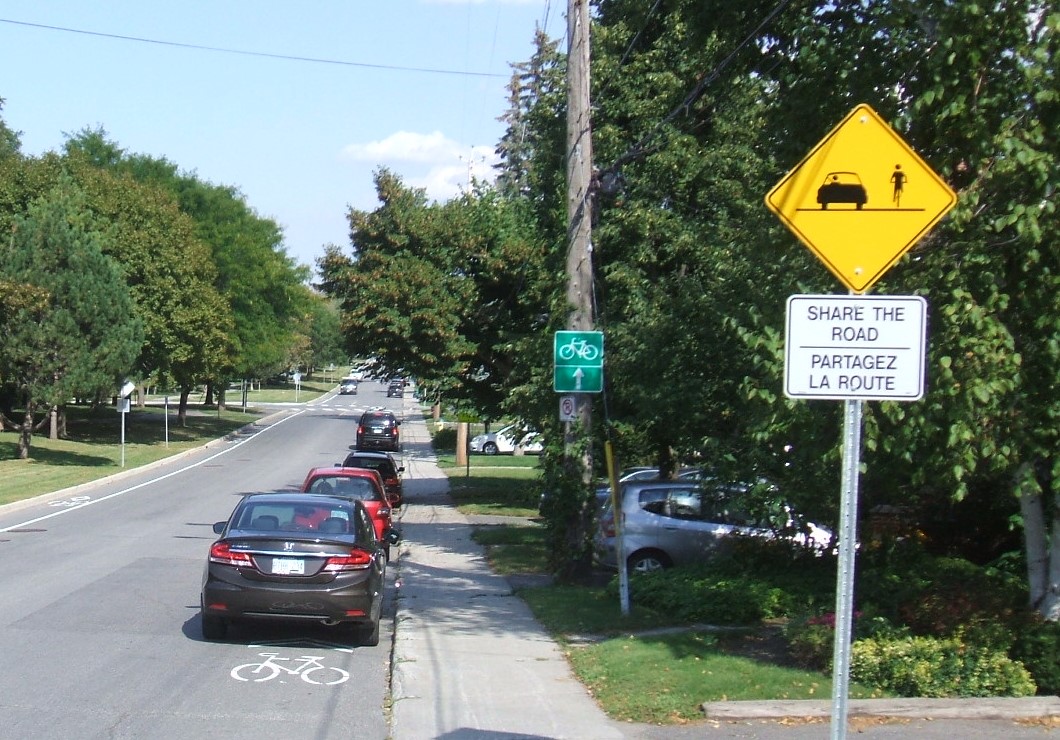 This photo, taken by Paul Clarke and posted on Bike Ottawa’s website, shows a sharrow route that is blocked by parked cars.

“While some experienced and confident cyclists find sharrows help emphasize their right to use the road, sharrows do not generally improve the safety or comfort of the average person. They are not a suitable substitute for cycling infrastructure for people of all ages and abilities,” says Bike Ottawa in their official position statement on sharrows. Even on the Bank Street Bridge, which Bike Ottawa says is probably the best implementation of sharrows in the city, the results are poor. (The city’s policy is to improve cycling facilities for “people of all ages and abilities”, so it’s interesting they pursue sharrows at all.)

There are numerous other examples of unempathetic infrastructure. You may have some of your own. I’d like to hear them — please get in touch.

How do we fix this city’s cycling infrastructure problem?

It starts with a mindset change. The engineers who design these roads need to understand that it’s not just improper use of the road that can kill a cyclist. The design of the infrastructure itself can cause these kind of collisions. I doubt there are many coroner’s inquests into traffic deaths, but maybe we should have them when a cyclist is killed. Would they end up identifying bad engineering as a contributing factor?

Providing safe spaces for cyclists needs to be taken seriously, too. Mayor Jim Watson tweeted that he’s instructed city staff to do a safety review of all intersections with high cycling volume. This is cute, but not the solution. The collision didn’t happen at an intersection. And even when that review is over, will he spend the money to improve the safety at the trouble spots it identifies? Let’s not forget this is the same mayor who tried with all his might to maintain on-street parking at the expense of cyclist safety during the Holland Avenue bike detour debacle last year. He only changed his mind after a week-long implementation that brought an impossible-to-ignore onslaught of media coverage and advocates demonstrating how unsafe the city’s initial design for the detour was.

I would say the time for studies has passed — we should know what works at this point. Unfortunately the politicians running the show aren’t demanding sufficient resources be provided to design and build infrastructure that will actually work at the scale we need to make it safe to cycle, across the city. Decision-makers need to get a clue and stop prioritizing the convenience of drivers over everything else.

You don't need a study. We all knew that lane was unsafe. Why not just #BelieveCyclists?

We keep keep flagging problem spots for you (Holland ave, ending Mntl rd lanes at Vanier pkway) and rather than #BelieveCyclists, you wait for people to get injured and killed. https://t.co/rLv3QOSglM

This does not impart that we need to demonize cars. It means we need to provide good service to *all* road users, instead of only cars as we currently do. This is a good thing for everyone — I would assume most people would feel terrible if they killed a cyclist while driving. Better infrastructure will make it less likely anyone would have to be in that terrible position.

People also need to speak up and get involved in the planning process for Ottawa’s new official plan. Getting strong language in there around active transportation would (hopefully) trickle down into the next transportation master plan and cycling plan, which would keep some of our more short-sighted politicians in check when they want to reduce, and not enhance, cycling facilities city-wide.

The city wants to be a cycling city — it’s time to put our money where our mouth is.

The City of Ottawa would like to remind residents of the following schedule changes for Victoria Day, Monday, May 20. Client services: Ottawa City Hall and all seven Client Service Centres, including the Government Service Centre located at 110 Laurier Avenue West, will be closed. ...