_ A weekly feature from Christopher Ryan , a local photographer, blogger and researcher. It appears every Friday on our blog. _

** UPDATE: ** Thanks to Andrew King for sending along this photo of the old Party Palace sign, next to the new.

By the early 1950s, the transformation of Elgin Street into a commercial strip had really taken hold. With the Elgin Theatre making its appearance on the old Protestant orphanage lot in 1937, along with a number of other businesses, the Elgin we know today was taking form. When Dave Polowin and Louis Mirsky returned from their tour of duty in Europe in 1946, neither were entirely certain what they’d like to do. Both, however, did have experience in sales and retailing, so they decided to put their talents together and purchased the Normandie Soda Bar at 250 Elgin.

After nine years operating the Normandie, “Dave and Louis” had developed a bigger vision. Centretown had been growing fairly rapidly. New apartments were being constructed regularly and, looking at the social pages, they not only popular among young civil servants and newlyweds, but also a striking number of the city’s business community. This part of Centretown hadn’t yet received a supermarket (the Elgin IGA was completed and opened in 1959) and both Dave and Louis heard many customers complaining that there was nowhere nearby to secure foods for last-minute dinner guests or appropriate items for a poker night. The Party Palace was born.

The Palace was immediately a hit. Highly popular with locals and visitors alike, Polowin and Mirsky established a unique business that hardly went a day without being mentioned in either the Citizen or Journal. Whether it was due to the exotic products they carried, such as elephant, whale, or turtle, or their willingness to bring in any new product and see if it worked. The Party Palace made national news in the late spring of 1957 when they became the first non-licensed outlet in the province to stock American “near beer”. A bemused Dave Polowin was quoted as saying “I don’t know why people come here for the stuff when they can get a better drink cheaper at a beer store.”

Indeed, The Party Palace was so popular that the pair opened another outlet in the new Manor Park Development. Although it did not remain open for long, the Manor Park outlet was graced by star of stage and screen, Joan Fairfax (Music Hall, The Denny Vaughan Show, The Joan Fairfax Show) in March of 1957.

The 1960s marked a change in ownership for The Party Palace. Dave Polowin, seeing an even brighter future elsewhere decided to leave the business. He first attempted to open a number of restaurants, which were unsuccessful and a car accident left him unable to hold on. After he recovered from his injuries and paid off his debts, he entered the real estate game and was very successful. The Palace was then sold to Ernie Potechin with Louis Mirsky remaining very much an integral part of the business and a fixture at the front counter until his death. 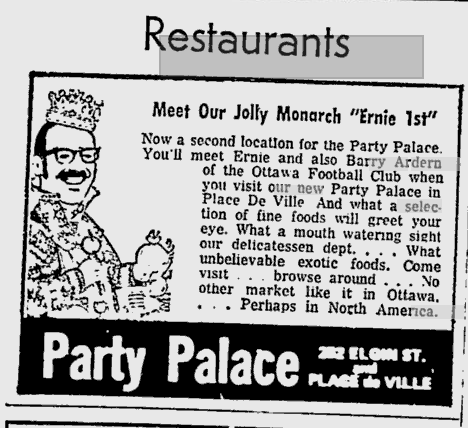 After having successfully fought City Hall on the antiquated early closing by-laws, expansion was in the mix. In 1972, Potechin opened a Party Palace in the Place de Ville development and the following year, he opened another in Bells Corners in the new Bell Mews strip mall. In both cases, Potechin always reported brisk sales at both outlets. Their Bratwurst were apparently the hot item in Bells Corners and their selection of coffees and teas were hot at Place de Ville.

Perhaps the popularity of the Party Palace was indeed more tied up in the charismatic owners, staff, and the personal relationships they forged with people in the community. It may not have been the food, as seen in a review of delicatessens in the city by Paula Collins that was run in the Citizen on June 24, 1972. 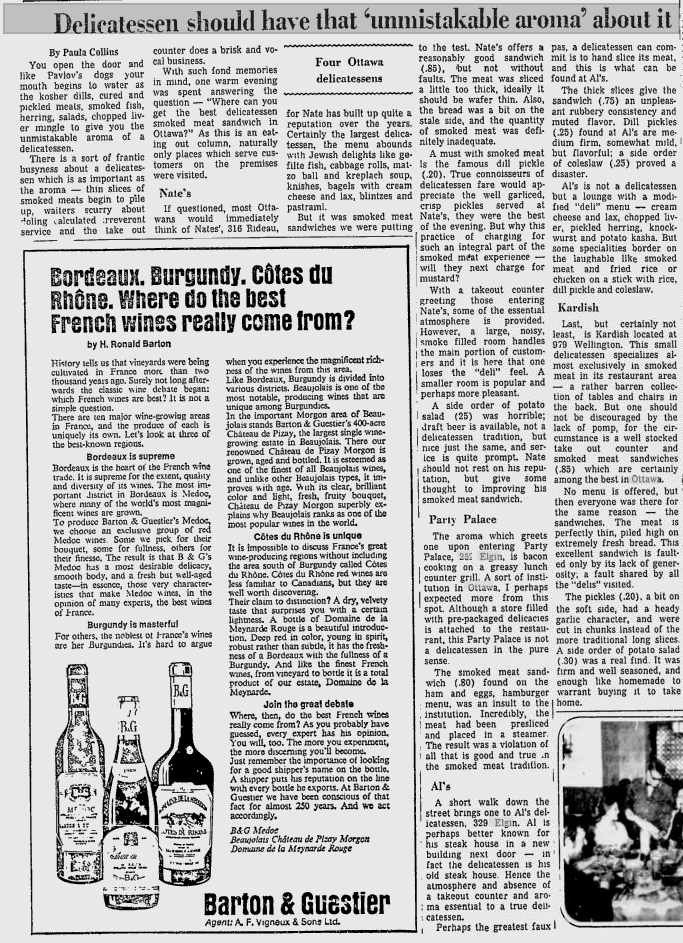 _ The smoked meat sandwich (.80) found on the ham and eggs, hamburger menu, was an insult to the institution. Incredibly, the meat had been presliced and placed in a steamer. The result was a violation of all that is good and true in the smoked meat tradition. _

Nevertheless, The Party Palace kept right on doing good business, slicing (or at least steaming) brisket, and selling exotic meats. As the years wore on, however, and the long-term staff retired, or in the case of Mirsky, passed away (1983), it became increasingly difficult to keep the doors open.

For my own part, I’m happy that it has remained. Although it is not the original Party Palace sign, it nevertheless remains one of the few of such neon signs remaining in the city. A reminder of the sort of neon-fueled animation that commercial streets once had.

** If anyone might have a picture of the original sign, I’d be stupendously happy to see it as I have been unsuccessful in locating it. **

[ ](http://ottawastart.com/wp-content/uploads/2014/06/lolProfile.jpg) ** ** ** ** Every Saturday we publish a link to the Lunch Out Loud podcast, a weekly show produced by Nick Bachusky and co-hosted by Andrew Miller. In this week’s episode, we meet up with Dustin, sports editor and Jakob, new editor from the Carleton University’s news media, The Charlatan. ...