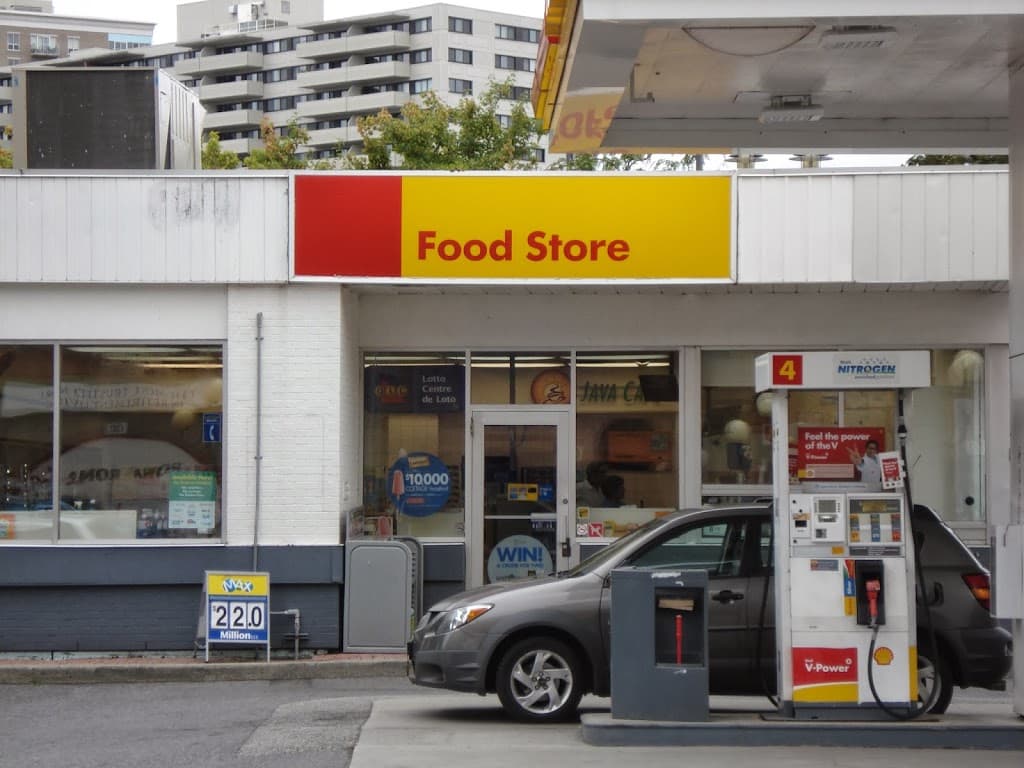 The corner of Beechwood and Charlevoix wasn’t always a place to fuel your automobile. Before 1962 it was home to the El Ropo Restaurant, Eastview’s outlaw restaurant.

Though it may not seem like it today, certain parts of Vanier North and New Edinburgh were at one point a site of industrial activity and the sort of rough living that is often associated with it. Given its location at the corner of Beechwood and Charlevoix in Vanier (then Eastview), close to Betchermann Iron and Steel and the Dominion Bridge Company (to say nothing of the other nearby industrial organizations), it’s probably not a surprise that a restaurant like the El Ropo would attract a tougher clientele.

It would be a mistake to apply this characterization on the location alone, however. After all, Ludger Dore operated his Café St-Charles at that address until his death in 1956 with seemingly little incident. At least nothing that made the papers. When Roger Yule took over the premises and opened his El Ropo Restaurant in 1957, it seemed like he would continue that tradition. Outside of being caught selling beer that he did not purchase in Ontario in 1958, it seemed like things would remain somewhat peaceful. In 1961, that would all change. 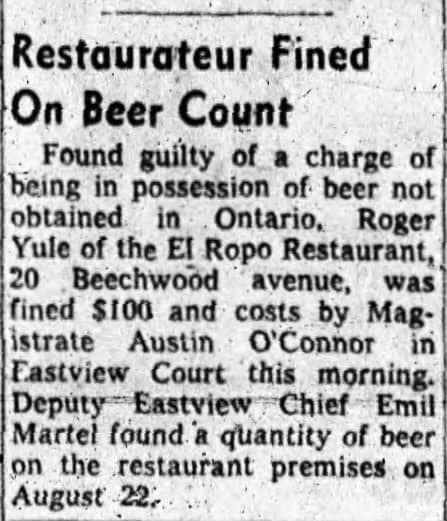 Roger Yule, caught with beer from outside Ontario.

On January 14, the Journal reported that Mrs. Lillian Schwergert, a waitress at the restaurant suffered from first-degree burns when she was scalded with hot water. How she ended up scalded, was that owner Roger Yule was in a dispute with Gary Angell (a patron of the restaurant), who was alleged to have assaulted Yule. In self-defence, Yule threw a pot of hot water at him. Before the incident came to trial, another incident with similar allegations was reported to have taken place the following week.

The Journal reported on March 10 that Angell was convicted of assaulting Yule and fined $15 with $3.50 in costs (or five days) for his assault of Yule and was fined $10 and $3.50 in costs (or two days) for causing a disturbance. Magistrate O’Connor warned Yule: “Don’t throw any more boiling water. Next time call the police.” In their own reporting on the incident, the Citizen had noted that Roger’s wife had thrown water in the past. This turned out to be untrue, however, and they printed a retraction. 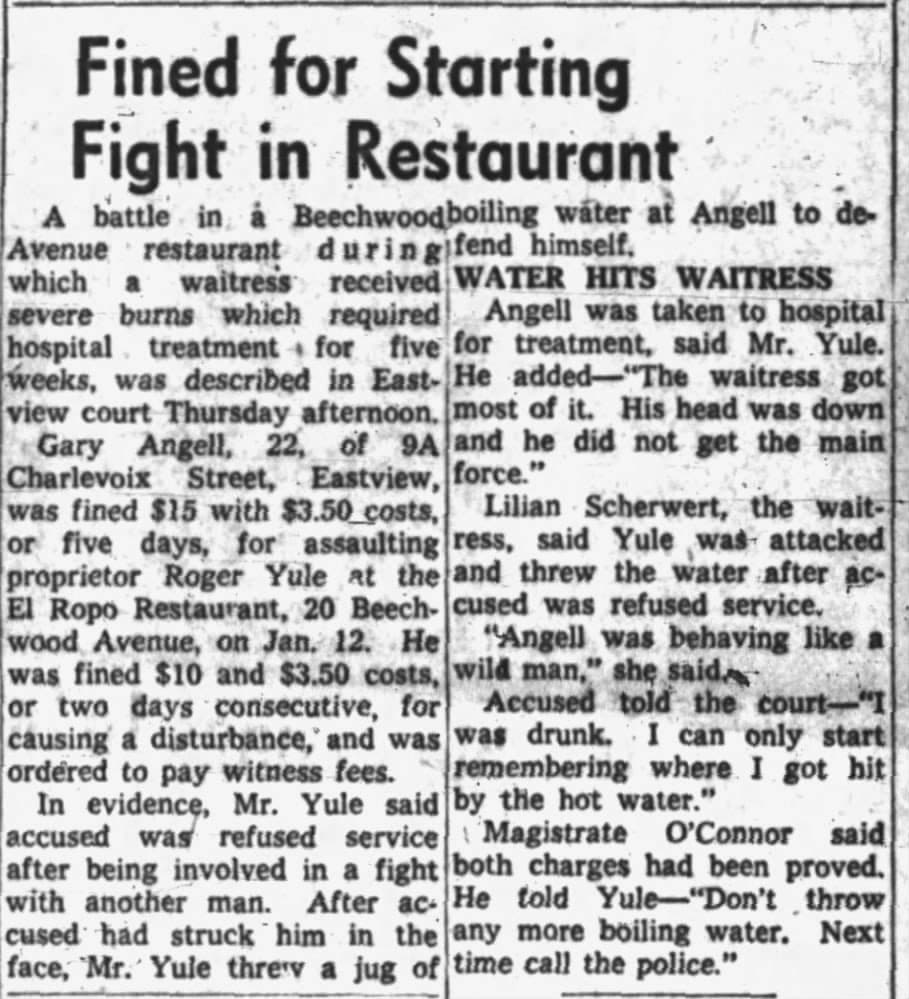 Gary Angell, fined $32 for assault and causing a disturbance. Yule warned about his self-defence tactics.

Eastview, which had been incorporated as a town for some time, had been growing rapidly and was well on its way to becoming a City (which it did in 1963). With the town’s Zoning and Planning Board formally constituted in the spring of 1961, one of the first orders of business was to invite Roger Yule to appear before council and explain why he should be granted a license to operate his restaurant.

First order of business: have Yule explain why his restaurant should remain open.

The number of disturbances reported on the premises was high. Police were called regularly, and the neighbours found it to be something of a nuisance. With the letters and phone calls so frequent, Eastview Police Chief Claude Dwyer recommended that the El Ropo’s license, which had expired on December 31, 1960, not be renewed. It wasn’t only Chief Dwyer, however. Representatives from a number of local social, religious, and juvenile service agencies were in attendance and opposed to the restaurant regaining its license. In the face of such opposition, Yule’s appearance in front of Town Council seems to have been something of a formality and his bid for a license was rejected on May 24. Of importance is that Town Council did not explicitly reject his bid for a license in their own name, but allowed the Chief’s recommendation to stand as their decision. This distinction would later be important. 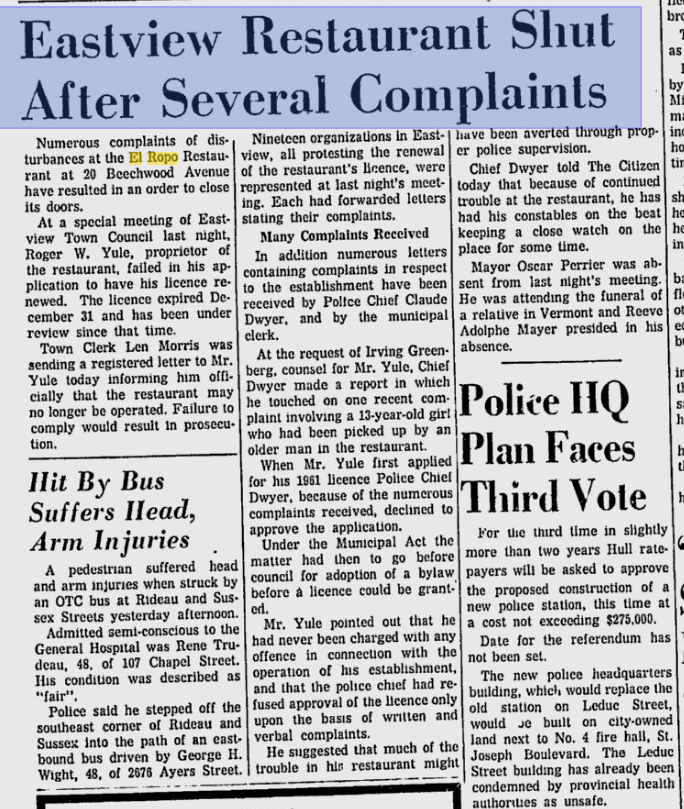 Eastview came out in force to oppose the granting of the El Ropo’s license.

Yule and his solicitor Irving Greenberg claimed that if there was any failure, it was not on his own part, but that the policing of that corner was lacking. Yule was quoted in the Journal the following morning as saying “[there] has never been anything wrong gone on in my restaurant” noting that many people who he had banned continued to return. 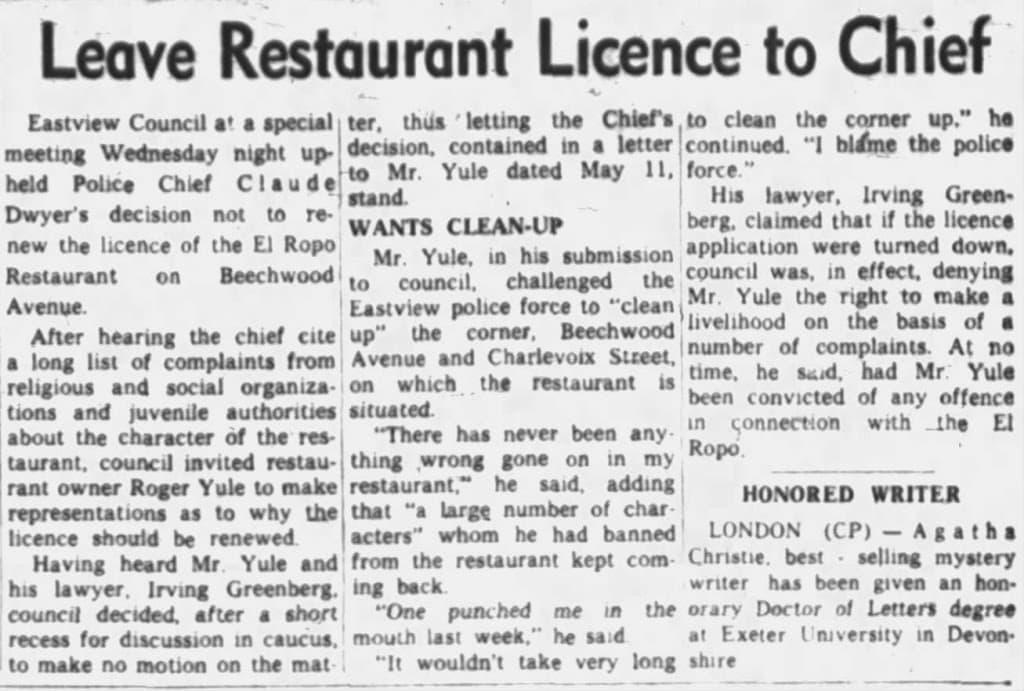 Unwanted pests continued to return, Yule said. His solicitor, Irving Greenberg suggested it was a failure

None of this phased Yule. It only emboldened him further. In spite of his being refused a license, Yule mounted a protest by erecting signs and refused to close his business. He was later quoted in the Journal as saying that “[this] whole affair has had a bad effect on business. Now people think they can get arrested if they enter my place.” He then suggested that “it’s up to the chief to make the first move.” In the face of such open defiance, Dwyer proceeded to Charge Yule under Eastview By-Law No. 167, operating a restaurant without a licence. If found guilty, Yule could be charged a maximum of $300 per day he remained open. 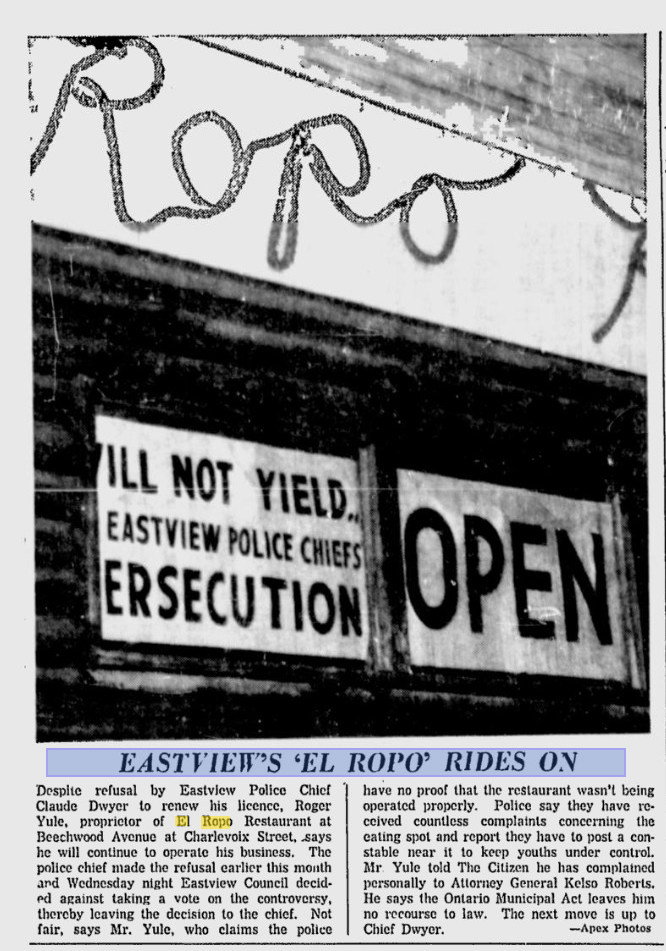 Yule was then ordered to appear before Eastview Magistrate Austin O’Connor, someone familiar with the disturbances in and around the El Ropo. Perhaps fearing an unfair trial as a result, Greenberg requested to appear before another magistrate. However, he declined to outline specifically why he made such a request. In what seems to be a challenge to Greenberg, O’Connor asked him whether it may have been him who recommended that Yule refuse to close. Greenberg declined to answer this as well. True to form, Yule ignored the numerous summonses he was issued – holding out for a new magistrate. This was granted on June 8, when it was agreed to grant him a hearing in front of Deputy Magistrate Omer Chartrand of Hawkesbury. 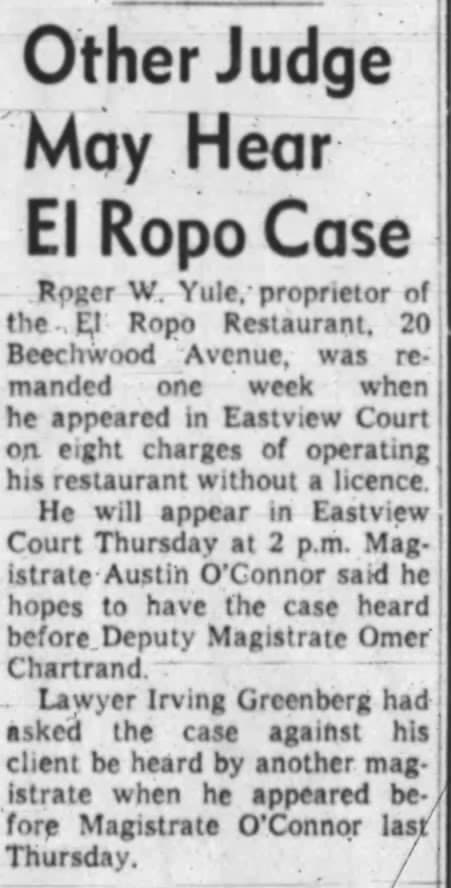 Yule’s request for another Magistrate was granted.

Yule didn’t sit still while he waited for his court date. On June 14, the Citizen reported that he drove to Toronto with his two sons and crashed an unrelated provincial government hearing to protest the way he felt he had been treated by Chief Dwyer. Once the hearing’s chairman informed him that there was little he could do for him, Yule quietly returned to his banner-festooned car, did a couple of laps around Queen’s Park, and left.

Yule took his protest to a higher authority in mid-June.

During Yule’s hearing on June 15, Yule’s lawyer for the hearing, Donald Diplock, alleged that Eastview’s by-law did not explicitly outline the duties of the police chief and that he was not rightly delegated those powers. The decision was reserved until the following Monday (June 18). While Yule was found guilty of operating without a license, his total fine was only $45 (rather than the $3000 maximum for the 10 days open without a license). Magistrate Chartrand concluded that while the delegation of power wasn’t itself illegal, the by-law wasn’t sufficiently clear.

Convicted and still without a license to operate, Yule nevertheless opened his restaurant as he normally would the following day, June 19. Once again, Chief Dwyer pointed out that should Yule remain open, he’ll be charged with the same by-law infraction. Sure enough as the sun rises, Yule was again charged on June 21. He was quoted in the Journal, saying that “I’ll go to jail before I close.” Coincidentally, he had appeared as a witness that morning at the Carleton County Juvenile and Family Court in the trial of a youth who was alleged to have assaulted him in the El Ropo that May.

While he had filed an appeal for his conviction, Yule petitioned Eastview Town Council to stop issuing summonses. He was denied. As the El Ropo case continued to consume much more oxygen than was likely desired, town council moved to amend its restaurant by-law, primarily to clarify the chief’s role.

Once again, Yule found himself on the losing end of the battle and Magistrate James Rennicks found him guilty. This time, Yule was fined $250 with costs (or 30 days) and an additional $50. He was given a suspended sentence on 17 other charges. Through the entire ordeal the signs of protest remained in the front window of the restaurant. 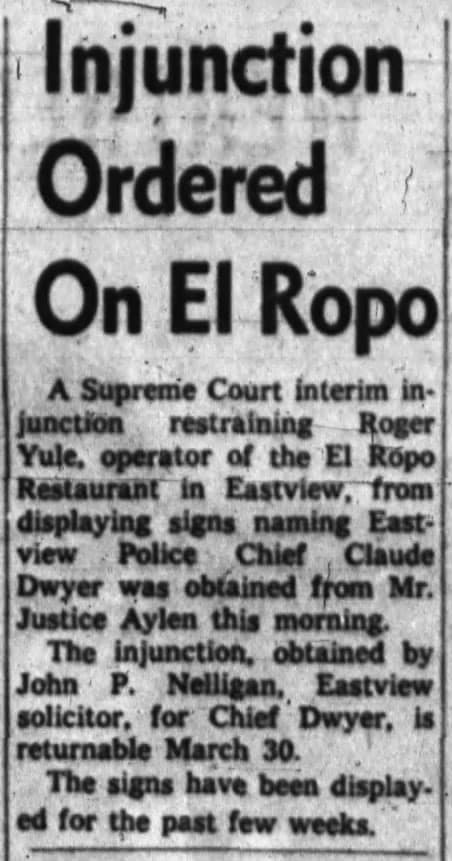 Mr. Justice Aylen issued an interim injunction against Yule, forcing him to remove his protest signs.

The same battle was waged once more during the spring of 1962, this time with an injunction being issued against Yule to force him to remove those signs. The Journal reported once again that Yule was charged and found guilty: this time $150 payable within the week or a 30-day jail sentence.

License or no license, Yule refused to back down after another round of fines.

The tale of the El Ropo came to an end when the Citizen reported on June 6, 1962 that the building at the corner of Beechwood and Charlevoix, which housed the El Ropo, had been sold and the site would soon become the site of a Canadian Oil Co. service station. Canadian Oil Companies, then purveyors of White Rose Gasoline, was bought out by Shell the following year. From what I understand, the station that was constructed always bore the Shell branding.

Interestingly, it was a gas station that removed the fuel from this particular fire! 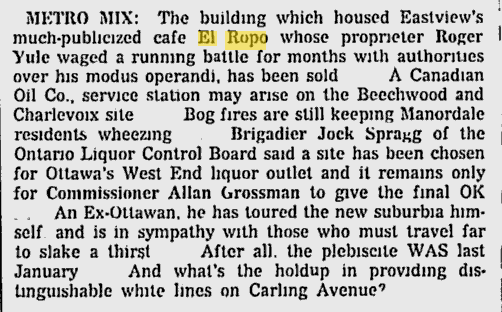 The El Ropo’s ride comes to an end. The building that housed the outlaw restaurant

[ ](http://ottawastart.com/wp-content/uploads/2013/12/lolProfile.jpg) ** ** Every Saturday we publish a link to the Lunch Out Loud podcast, a weekly show produced by Nick Bachusky and co-hosted by Andrew Miller. In this episode, we go over the memorable episodes of the past year and preview our upcoming guests in 2014. ...

Every day in December leading up to Christmas, local photographer Christophe Ledent is sharing a photo and story about Ottawa Christmas lights. ( You can see all the photos so far here. ) Today’s home can be found on Fraser Street just south of Byron near Westboro. ...