A weekly feature by Christopher Ryan, a local photographer, blogger and researcher. It appears every Friday on our blog.

There’s an old joke that goes something like “An official from Public Works and one from the National Capital Commission walk into a bar…” As with any number of establishments in Ottawa’s downtown in the immediate postwar period, by hook or by crook, the federal government’s insatiable appetite for office space shouldered them out of the picture.

Picking up where I left off last week, Harry MacMillan purchased the Belle Claire outright in 1941. From the advertisements in the Citizen and Journal, it appears that business continued to grow and that his establishment became a local watering hole (to say nothing of hotel) of some popularity. 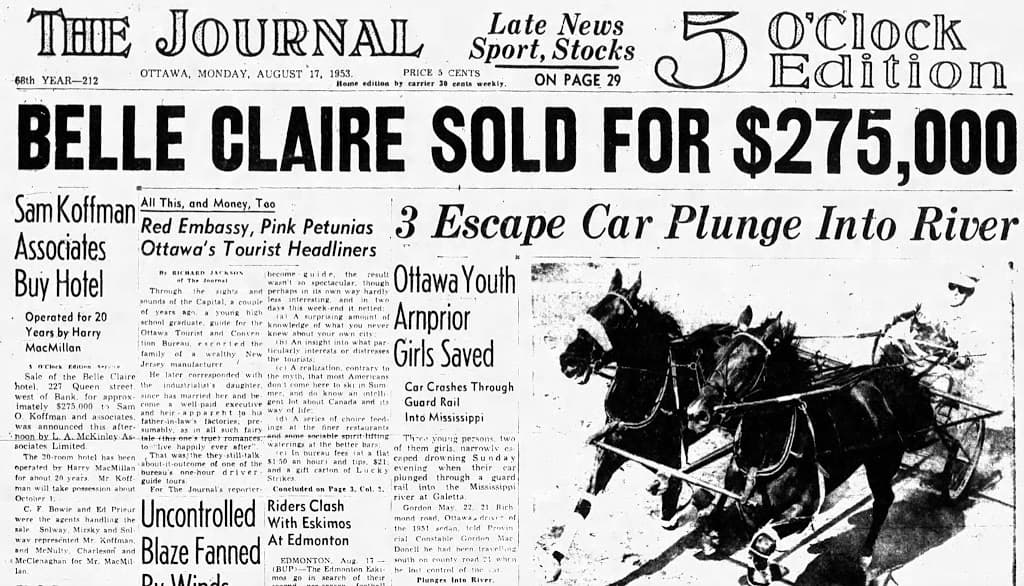 The sale of the Belle Claire from Harry MacMillan to Sam Koffman was announced in evening edition of the Journal. Source: Ottawa Journal, August 17, 1953.

From the get-go, Koffman’s big personality shone through. Much like Mirsky & Polowin with the Party Palace on Elgin, the Belle Claire was identified closely with its owner. 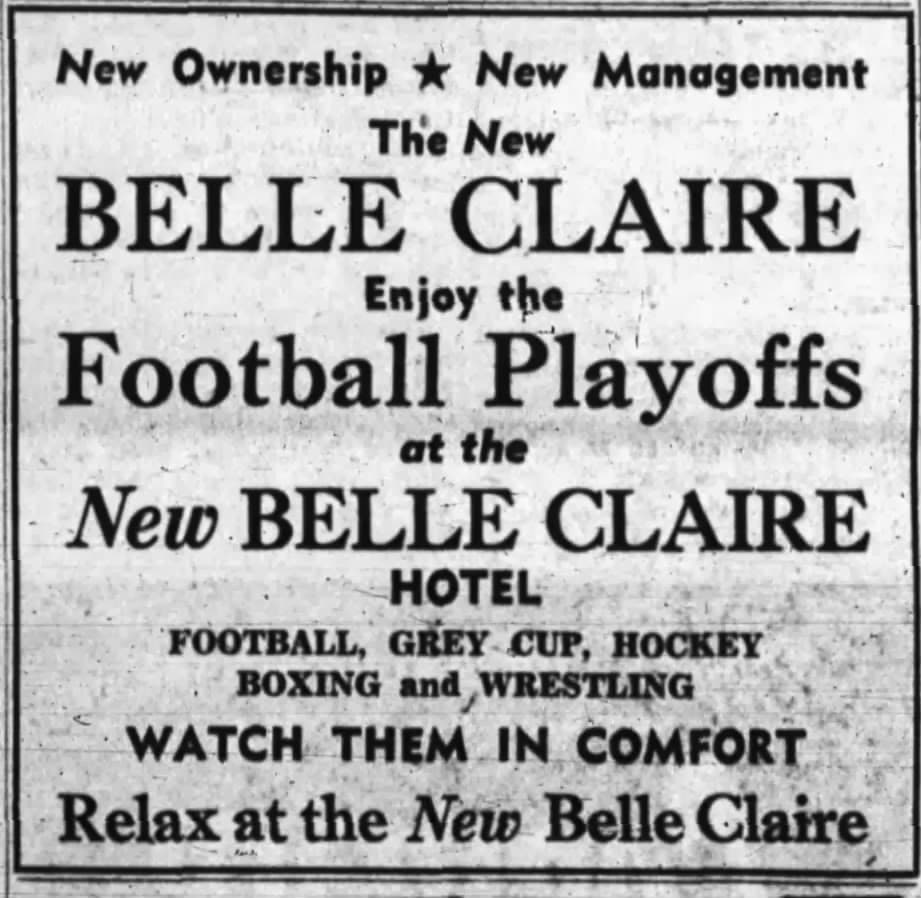 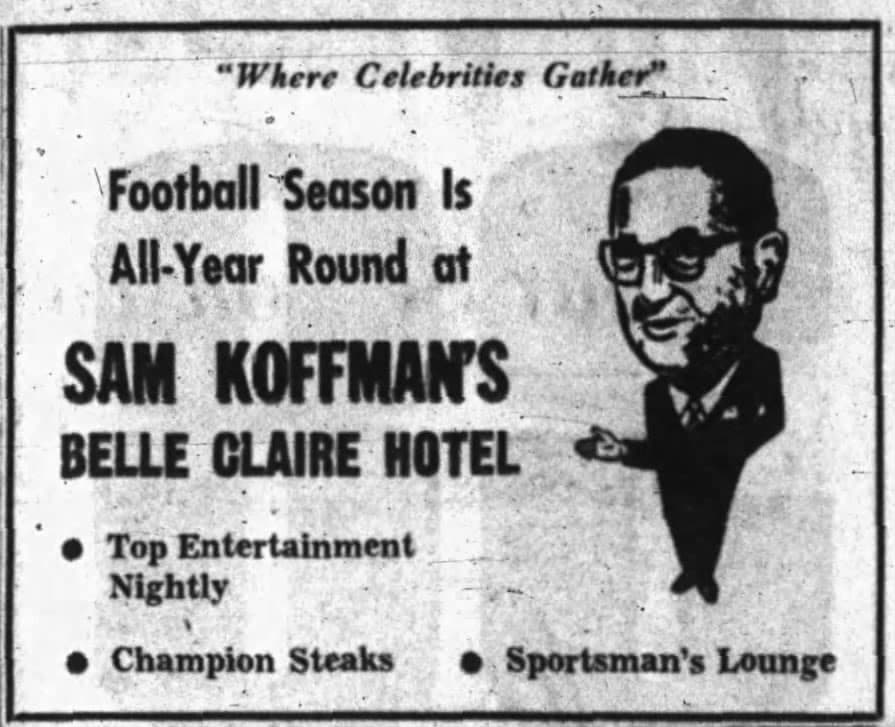 This charicature of Koffman was featured in hundreds of ads through the 60s and 70s. Source: Ottawa Journal, March 31, 1964.

Under his ownership, the Belle Claire was transformed from a successful hotel and conference space to one of Ottawa’s main hot spots. The Sportsman’s Lounge (Celebrity Lounge) attracted just the sort of local celebrities that he was looking to: Defensive Tackles and Deputy Ministers alike. Should the glittering locals have not been enough, the Belle Claire provided nightly entertainment.

One example of the variety of what the Belle Claire had on offer. Source: Ottawa Journal, January 27, 1971.

During the postwar expansion of the Capital, both the Citizen and the Journal each must have had a full-time clerk responsible for the National Capital Commission’s demolition tenders. Whether it was homes along the rivers or commercial edifices in the downtown core, the agency put out hundreds of tenders for demolition in the immediate postwar period. Of course, the Belle Claire, which stood in the way of the construction of the C.D. Howe Building, was no exception. It had to go, and Koffman developed plans to construct a new hotel nearby. The show must go on, after all. 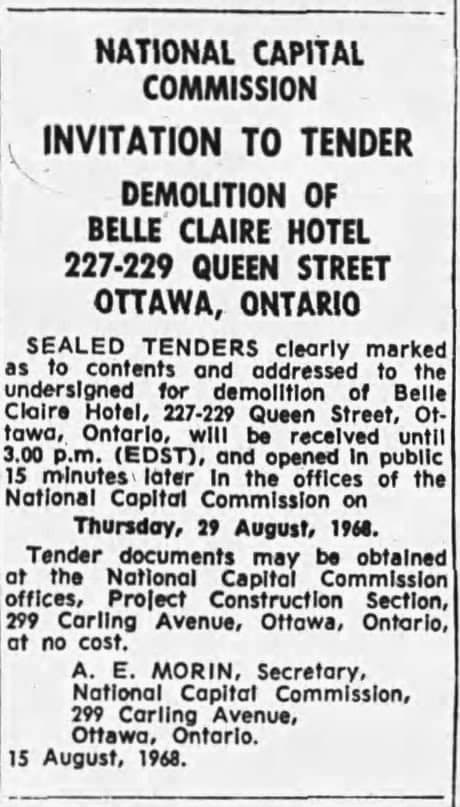 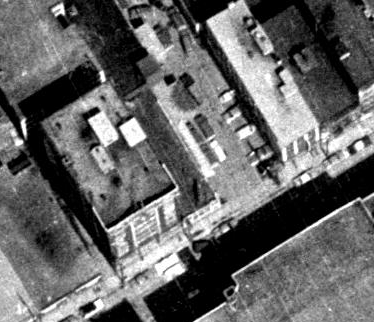 Aerial photograph of Queen at Bank in 1965. The Belle Claire is to the right and the Journal’s offices to the left. Source: geoOttawa.

Koffman was somewhat tight-lipped about the nature of the move, but in 1967, ever-present members of the Journal staff were able to pry a nugget or two from him. For example, it came to light that the “New Belle Claire” was going to have a discotheque, all the rage in the US at the time. 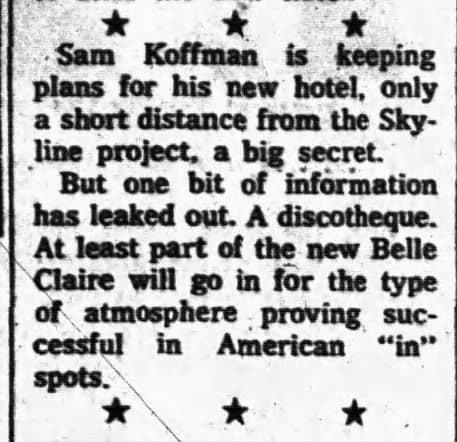 The location of the move was no mystery: a little west and across the street to 260 Queen. Construction appears to have proceeded at a reasonably quick pace and with (generally) little incident. 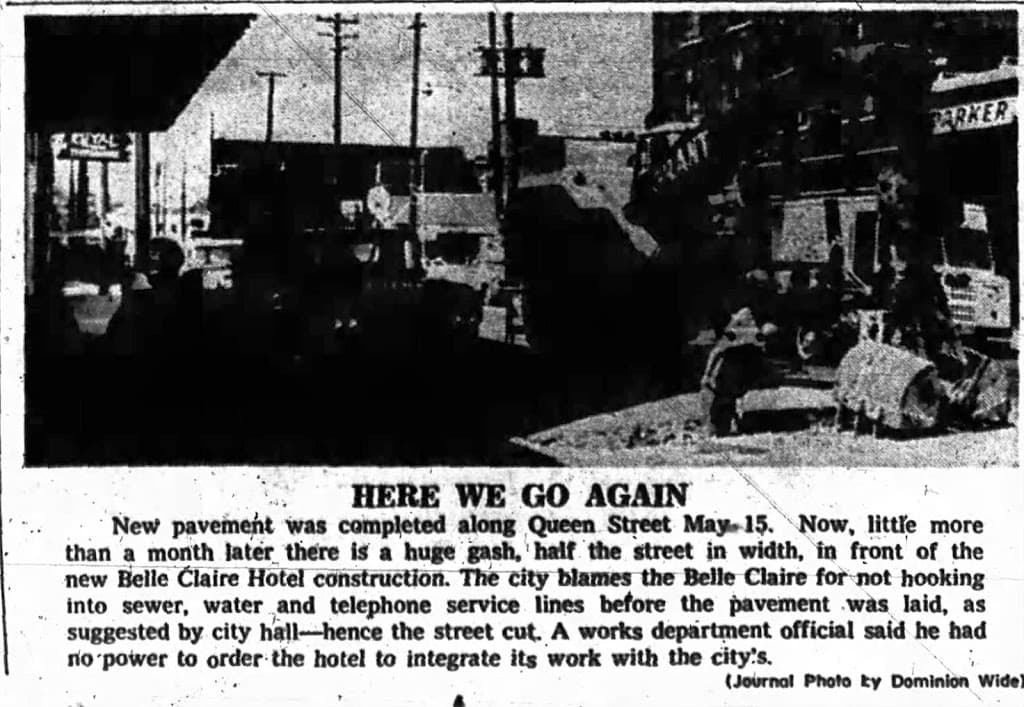 There were some asymmetries in the Belle Claire’s construction schedule and the City’s for Queen Street. Source: Ottawa Journal, June 21, 1967. 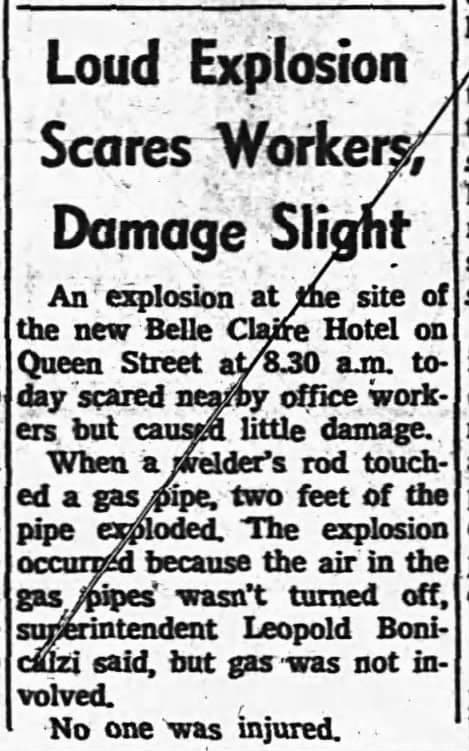 There was one explosion, but fortunately there were no casualties. Source: Ottawa Journal, August 4, 1967.

Sure enough, Koffman delivered, and the new Belle Claire appeared to be even more popular than the original one. The Journal, whose staff were also relocated in the effort (down to Kent and Laurier), followed as well, if with a little sadness. 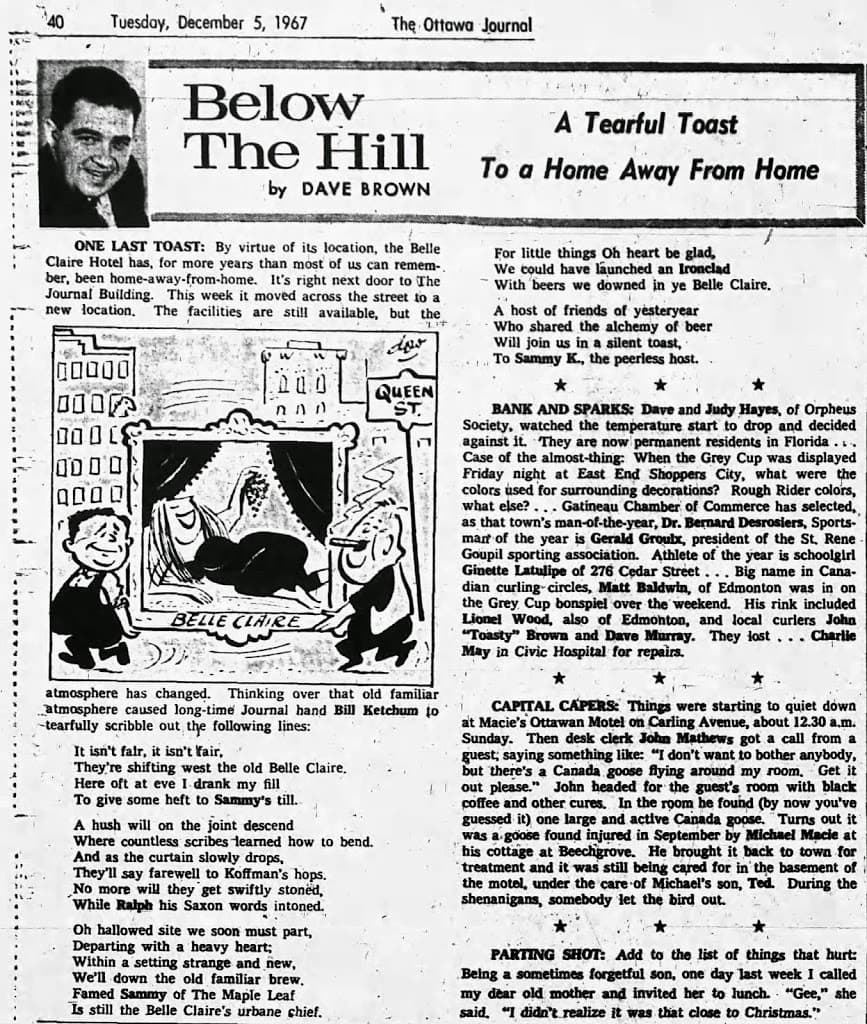 Journal staff loved the new digs and Koffman in particular, but did miss the old location. Source: Ottawa Journal, December 5, 1967.

The new version of the Celebrity Lounge didn’t seem to skip a beat either, with what seemed to be half the Roughriders being a regular presence. Perhaps even more so than in the old location across the street, night after night, the hotel featured musical acts. Among the more well-known was the Gerry Joly Duo.

As well, much like what seems to have been nearly every hotel and tavern in the early 1970s, the Belle Claire also offered topless dancers. 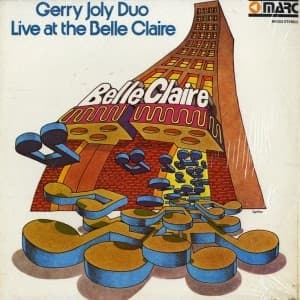 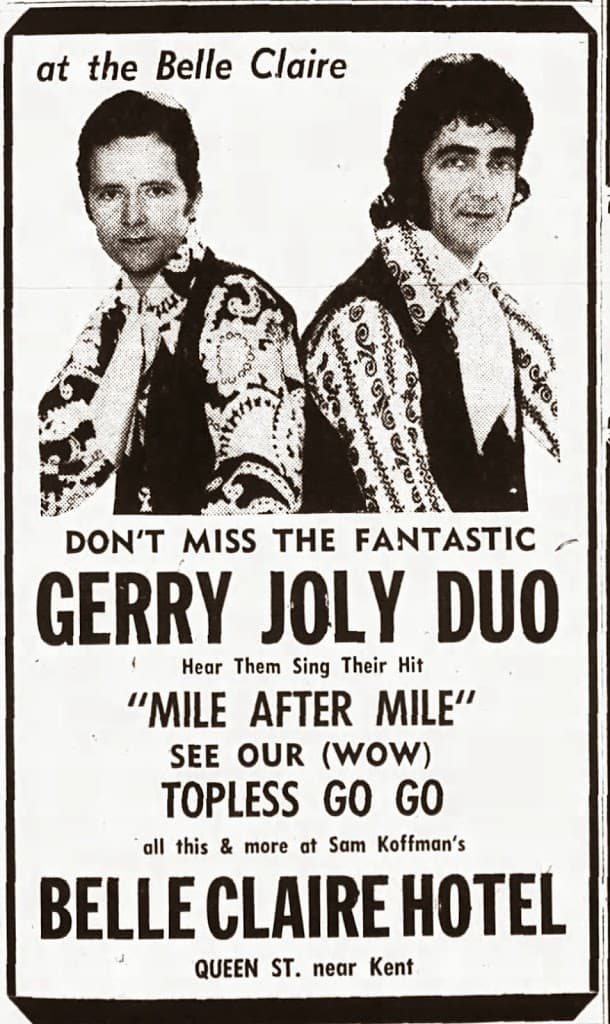 Alas, in spite of being shouldered out of their old location, those were still salad days. As it would turn out, the New Belle Claire was going to go the way of the old one: a fate that it met not seven years after its grand opening. In a context of explosive federal growth, that block came under significant development pressure almost as soon as the paint was dry.

The Cadillac Development Corporation (Cadillac-Fairview) had some grant plans for the block. Source: Ottawa Journal, February 29, 1972.

The following year, in 1973, it was confirmed that Koffman had indeed sold his property to Cadillac and their three-tower $30 million office construction project was set to go ahead.

And that was it. Seven years of live acts, dancers, and a few too many scotches, what remained was nothing outside of some great memories.

Unfortunately, Cadillac did not strike while the iron was hot and before any shovels hit the ground, federal policy shifted, leaving Ottawa vacant office space in the millions of square feet. It also appears that competing with the Campeau Corporation on the office front was somewhat problematic. 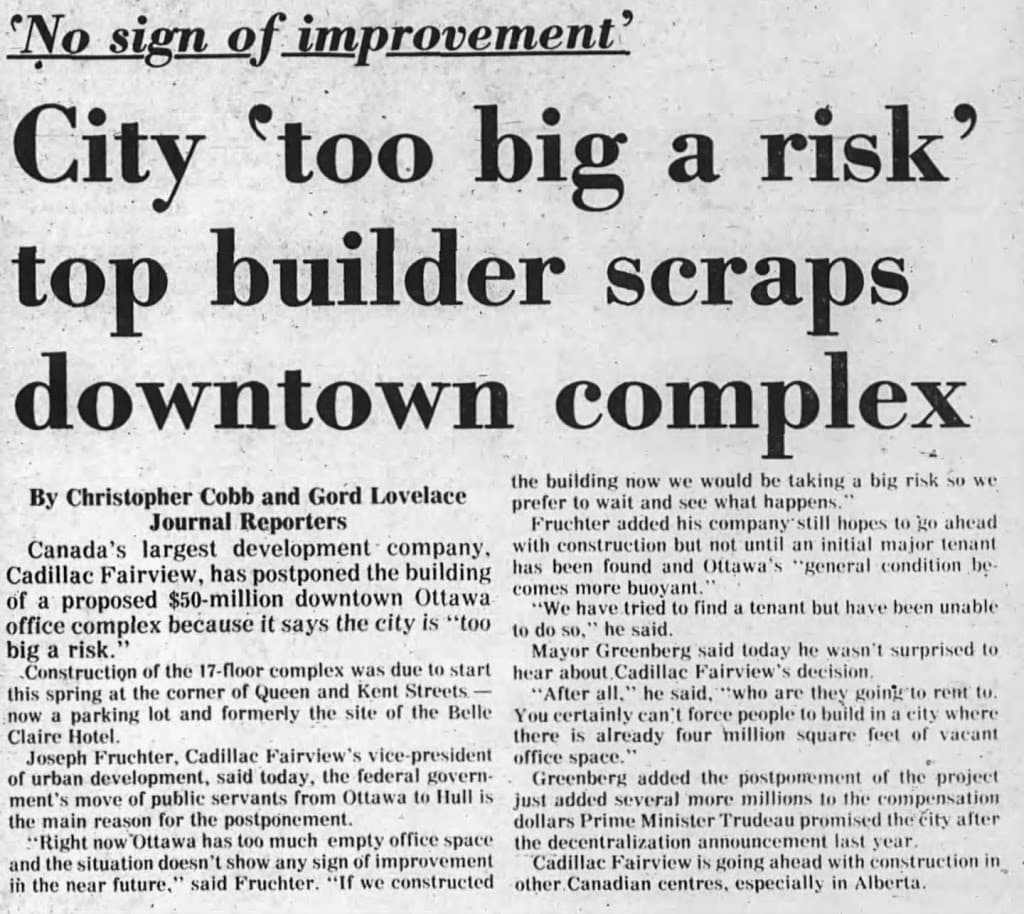 Trudeau’s new policy to shift a portion of the civil service jobs across the river to Hull left Cadillac’s project without much in the way of prospective tenants. Source: Ottawa Journal, January 5, 1978.

Nearly 40 years after the Belle Claire poured its last beer, the lot has yet to play host to an office complex. With the Confederation Line’s Lyon station being constructed nearby, the long wait may eventually come to an end. 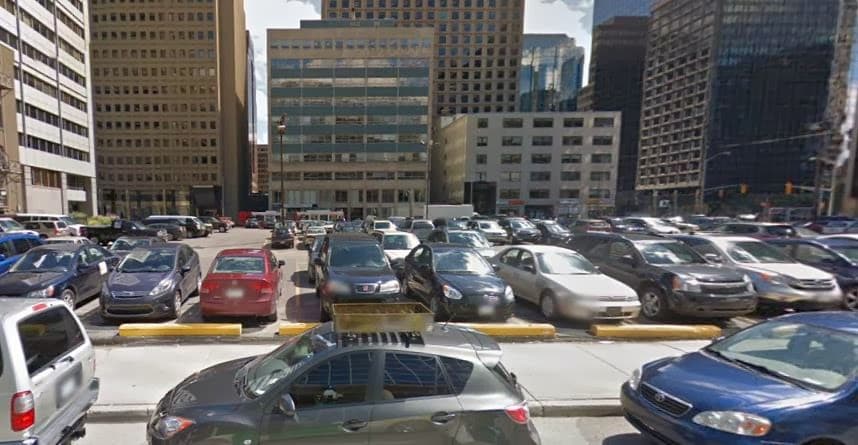 So it goes. A number of parcel assemblies have, over the years, failed to be built on. Source: Google Maps.

Shawn Nystrand sent along this panorama of Place d’Orleans shopping centre as it looked in 1979: (Click for full size) Andrew King recently saw this old LP for sale on Kijiji: “Jack McPartlin Live Sing-Along Album recorded at the the Colonel By Lounge, Chateau Laurier mid 1960s. ...