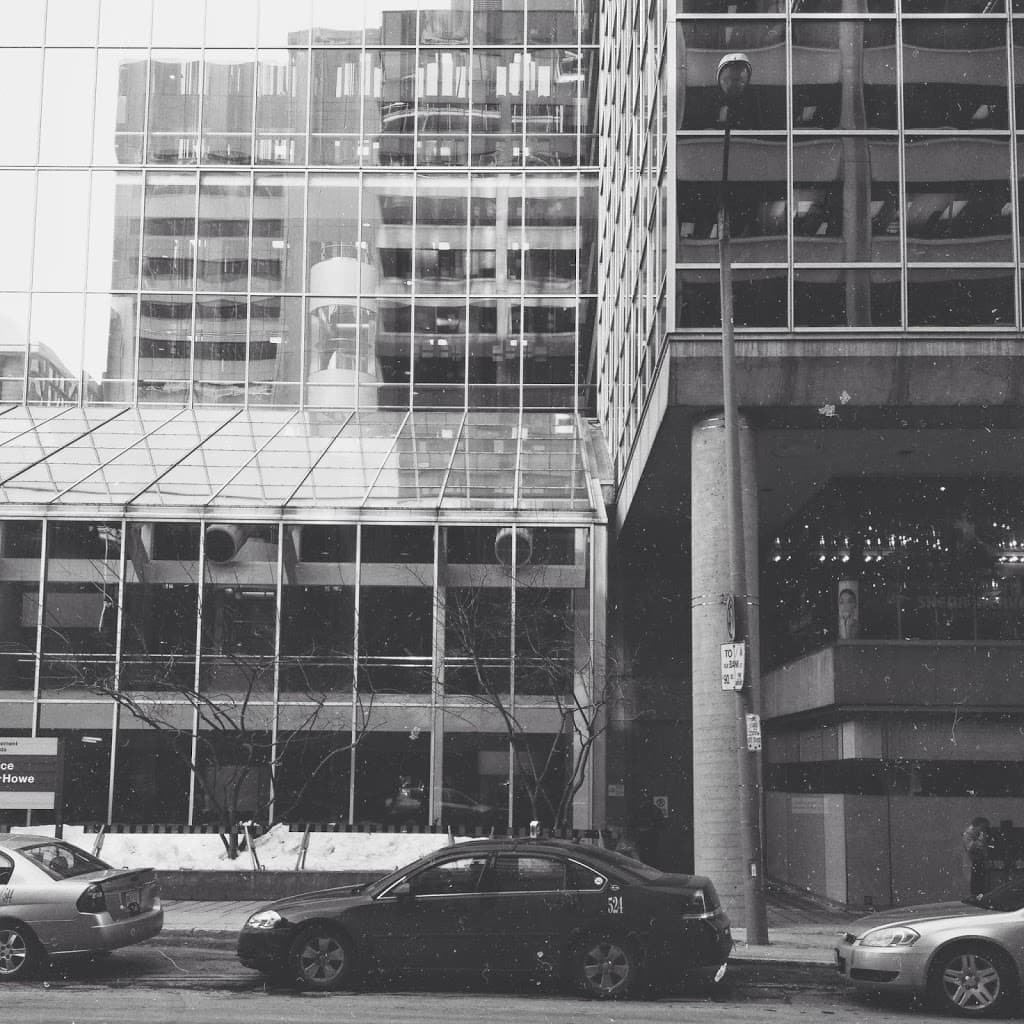 The Belle Claire today. Well, it would be had it not been demolished for the construction of the C.D. Howe Building. January 2014.

In every city, town, and hamlet in the country, there are a number of establishments that are able, for one reason or another, become a popular gathering place for well-placed members of the community.

The Party Palace on Elgin was one of those places and I have written about it previously. Another hotspot for some of the who’s who of Ottawa was the Belle Claire Hotel on Queen Street at Bank. Being located adjacent to the offices of the Ottawa Journal did not hurt the Hotel in achieving this notoriety. 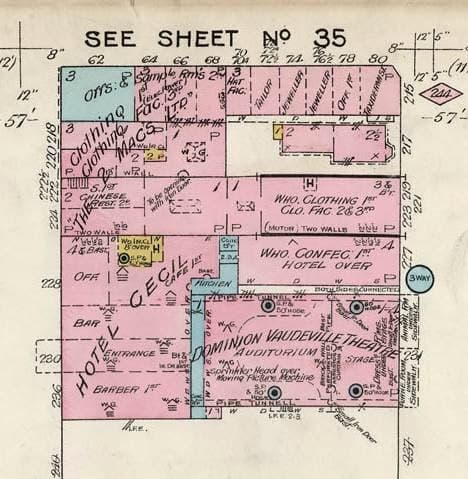 Previous to the fire at the Dominion Theatre and the Hotel Cecil, there was plenty of activity on the block. Source: Goad’s Atlas 1902 (1912 revision). 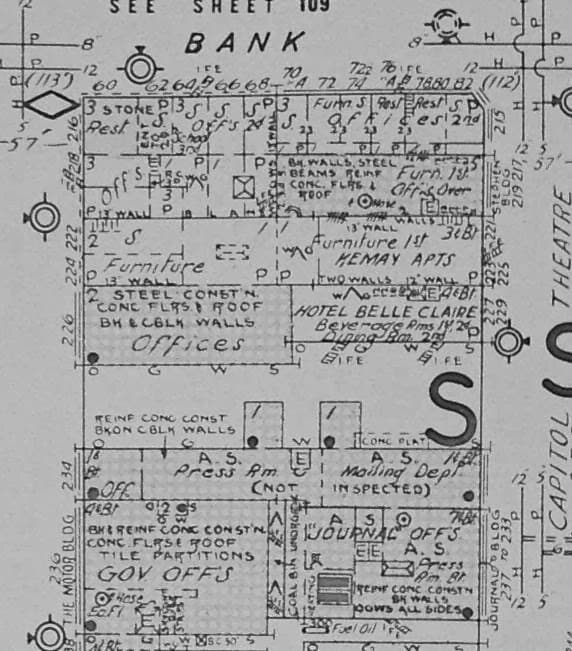 It likely didn’t hurt the Belle Claire’s chances that the offices and press room of the Ottawa Journal were so near. The close proximity of a recruitment office probably didn’t hurt either. Source: Goad’s Atlas, 1956 (Vol. 1) 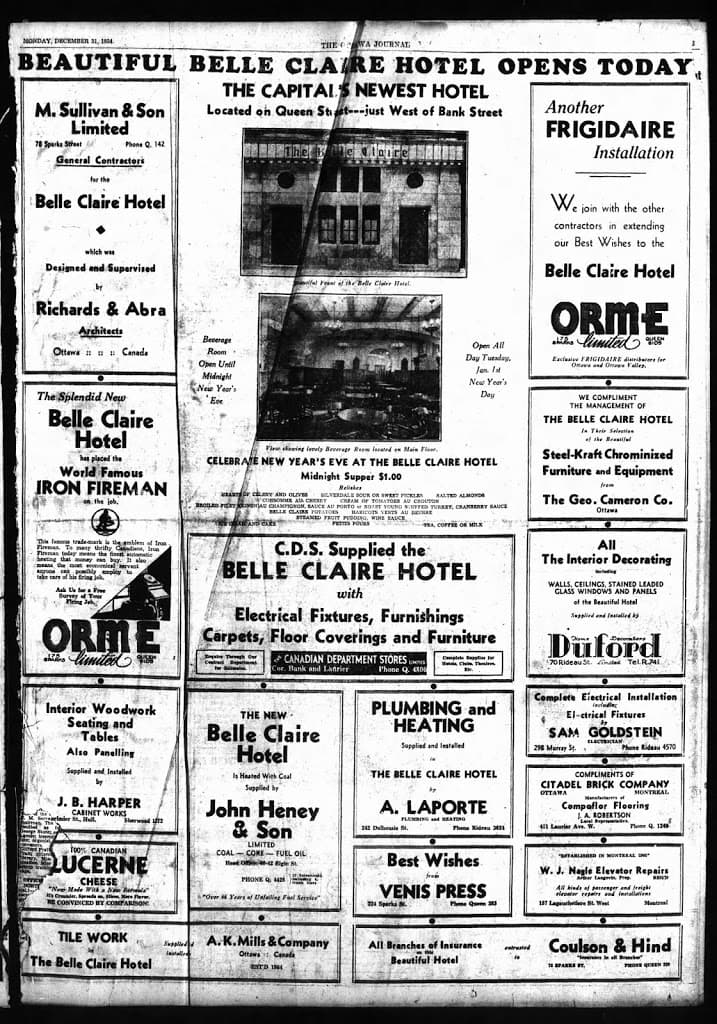 The Belle Claire opened on December 31, 1934, just on time to usher in New Years’ 1935. The building was owned by the estate of Thomas Robertson, who bought the property in 1906. The upper floors, which contained the hotel rooms, were actually used by the Cecil, situated on the lot behind it before it burned down. Almost as soon as it began operation, it was sold to Peter Karson, who had run a confectionery operation on the site for some years.

Under Karson’s ownership, the Belle Claire began to advertise aggressively in the local papers. 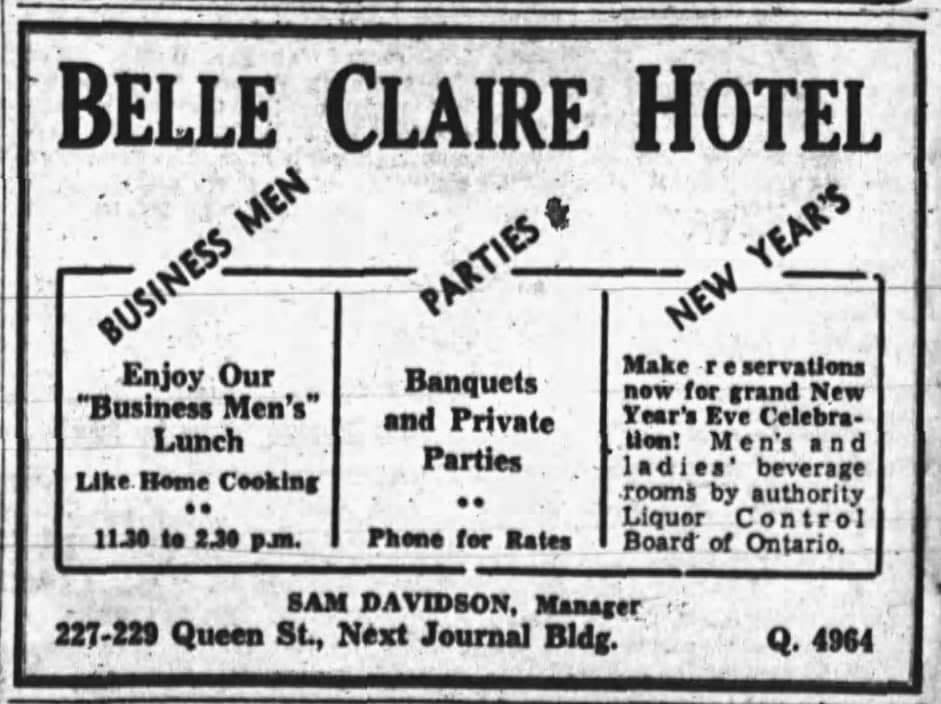 The Belle Claire advertised frequently. As with most hotels of the time, the rooms were generally of secondary importance relative to entertainment and kitchen. Source: Ottawa Journal, December 30, 1935 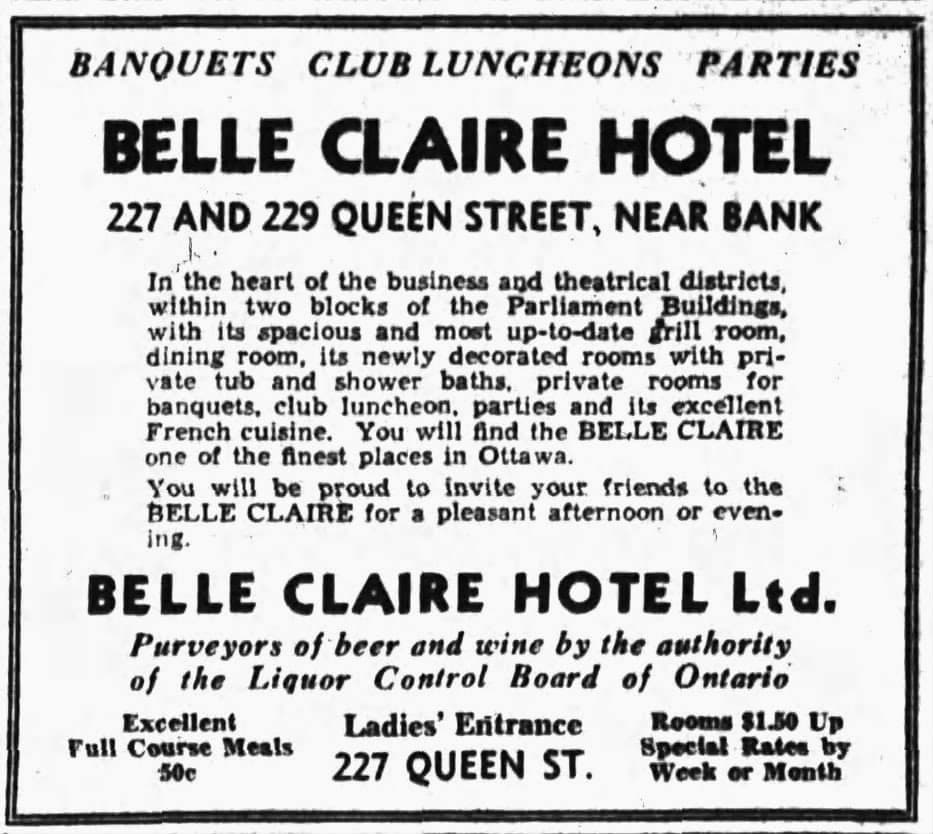 As with all liquor-selling establishments in Ontario during the period, there were separate entrances for men and women. Source: Ottawa Journal, February 8, 1935. 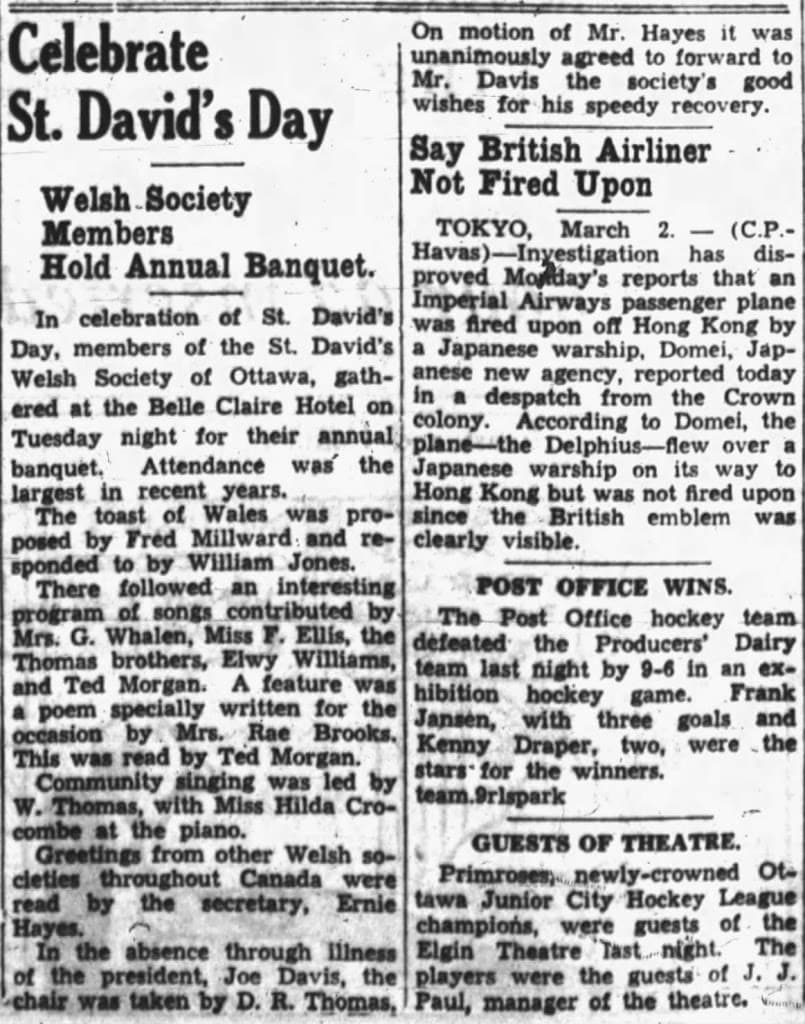 The Belle Claire was also eager to host any number of events that needed the space. In this example, the Welsh Society of Ottawa threw a St. David’s Day banquet. Source: Ottawa Journal, February 3, 1938.

Karson’s interest in the hotel business was limited, however, preferring the role of restaurateur to hotelier. In February 1938, it was reported that Karson had sold the hotel to a Toronto-based consortium for $100,000. The consortium quickly incorporated. Interestingly, the transaction was handled by Warwick Beament, who was the legal mind behind the development of Manor Park.

In the spring of 1941, the company was purchased by Harold MacMillan, president of the Ottawa Hotelman’s Association and manager of the Belle Claire since their purchase of the hotel. Perhaps a sign of MacMillan’s managerial style and attention-grabbing methods to come under his ownership, the hotel’s talking parrot garnered headlines in 1940. 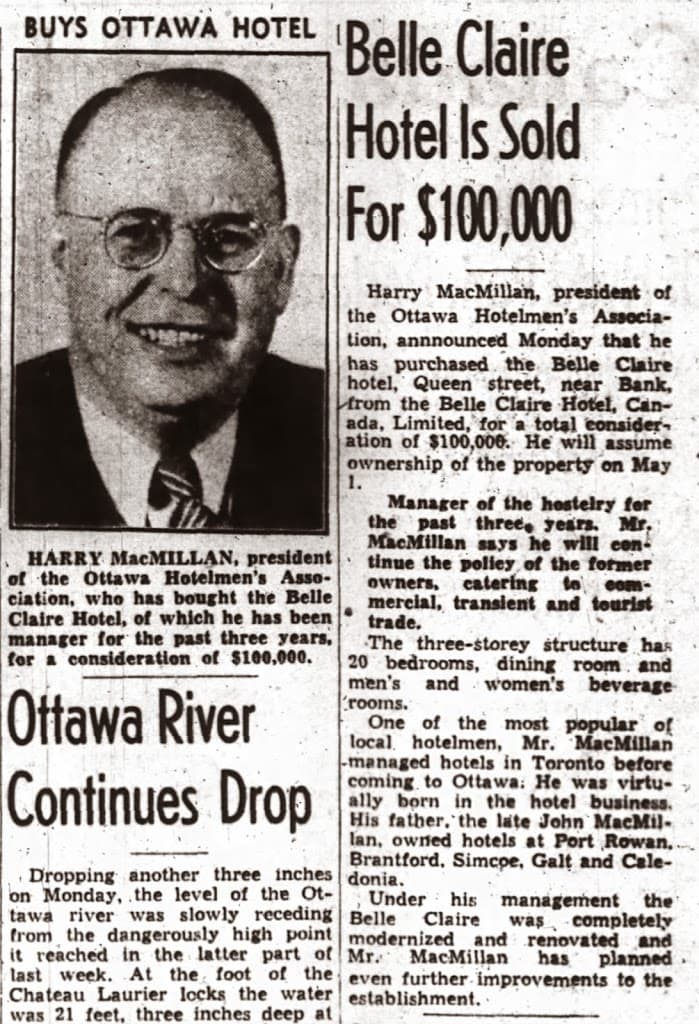 Under MacMillan’s ownership, the Belle Claire would continue to be modernized and the focus of the 20-room hotel would continue to be shifted to dinners, trade shows, and entertainment. In Part 2 next week, I’ll continue to explore MacMillan’s legacy and introduce the fifth (and final) owner: the larger-than-life Sam Koffman, whose ownership of the Belle Claire took it in a different direction and placed the establishment in the pantheon of legendary Ottawa hotspots. 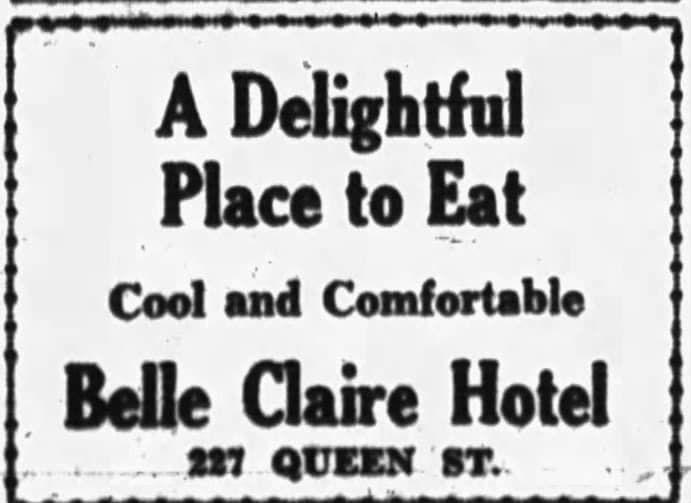 [ ](http://ottawastart.com/wp-content/uploads/2014/06/lolProfile.jpg) Every Saturday we publish a link to the Lunch Out Loud podcast, a weekly show produced by Nick Bachusky and co-hosted by Andrew Miller. In this week’s episode, special guest is Lon Ladell, brewmaster at Big Rig Brewery, and music is from Silkken Laumann. ...

](http://ottawastart.com/wp-content/uploads/2014/01/afd598349d36b904e23af03d766ee48c_large.jpg) Sometimes you just have so many items on your “to blog about” list that you just have to round them all up and publish them all at once. That’s the idea behind today’s post, which may become a regular Friday feature on our blog. ...