The entrance to the Park Square apartments, November 2013.

A weekly feature by Christopher Ryan, a local photographer, blogger and researcher. It appears every Friday on our blog.

It would be safe to suggest that Ottawa, at the national capital, experienced the depths of the Depression differently than much of the remainder of the country. While constructions projects were cancelled or stalled in cities like Montreal, Toronto, and Winnipeg, Ottawa (and in particular Centretown) experienced something of a boost in residential construction. Though I have briefly introducted the numerous Snear Miller projects in the past, he was far from the only Ottawan constructing apartments during the Depression.

Wolf Shenkman was perhaps the most active of all Ottawa developers during the first half of the twentieth century and during the Depression years in particular. Hardly a day passed where a property transaction or plan to construct an apartment was not reported on. On October 4, 1934, the Journal reported that he had purchased the lot on the southeast corner of Elgin and Park from Edgar L. Horwood for a sum of $6,000. 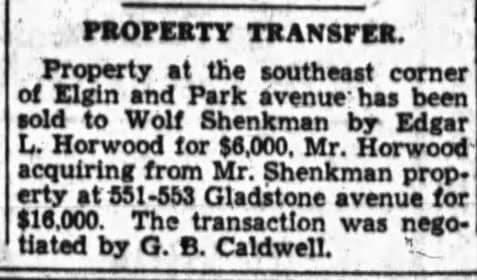 Two years following, the Journal announced that J. Harold Shenkman was to construct a new three-storey apartment at the corner of Elgin and Park Ave for a cost of $23,000. 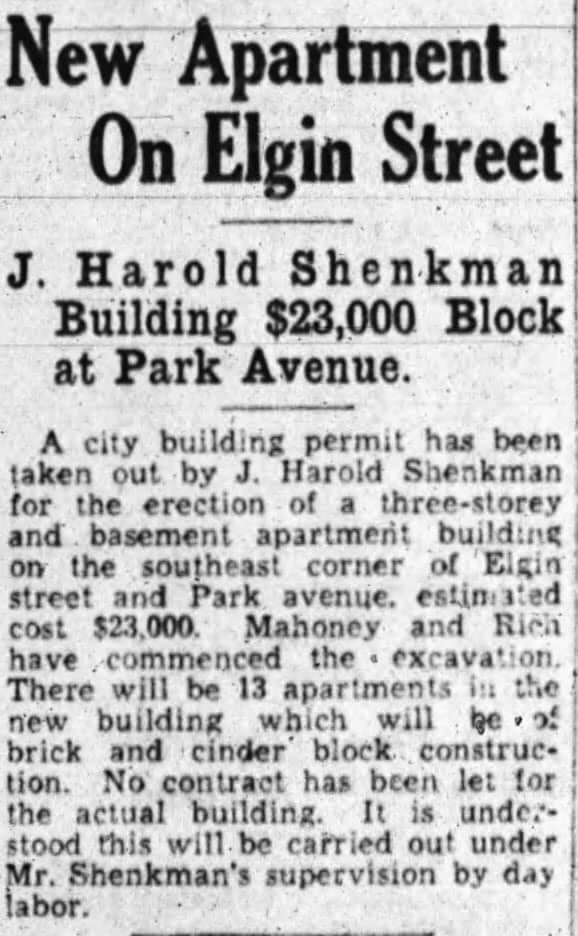 When it was announced, the digging had already begun on the Park Square Apartments. Source: Ottawa Journal, September 23, 1936.

Construction had continued into the early winter and it was completed in the new year. Unlike a number of other apartments around the city during this time, it seems that occupation commenced with little fanfare.

A low-key introduction.  I admit that I could have missed a triumphant full-page ad. Source: Ottawa Journal, January 9, 1937.

For the most part, the Park Square has existed in a state of quiet dignity. Occupying a part of Centretown that may be considered to have been relatively safe and quiet (save for the passing trains in the pre-Queensway era), the Park Square story would have ended here. Indeed, most of the references to the apartment that I was able to locate in the Citizen and the Journal were human interest stories. 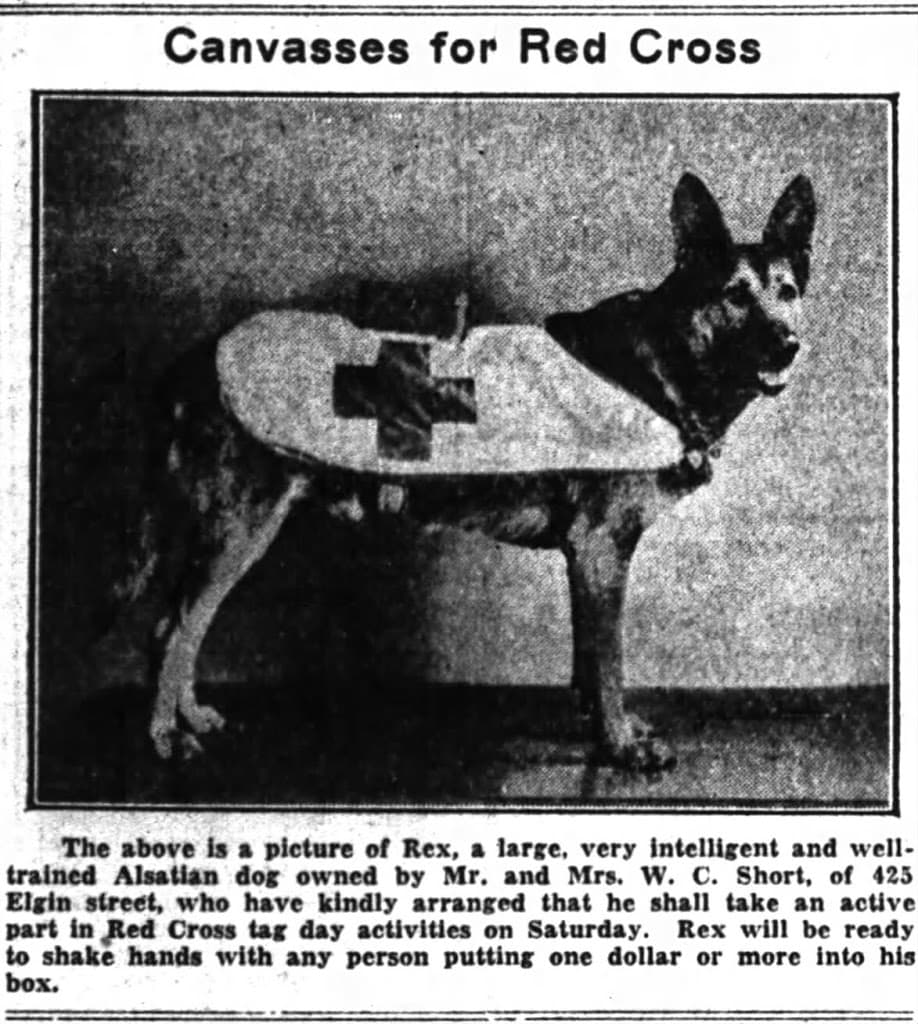 Only 10 years following its construction, Shenkman (via Monarch Realties) sold Park Square to one M.K. Emerson for $55,000. With inflation factored in, a decent, but not spectatular profit. Nevertheless, Monarch’s goal of shedding a large number of its small apartments around the city had been reached.

In general, if an apartment building can survive middle age, its chances of long-term survival are higher. Outside of certain circumstances, the value tends to sag at a point from 25-40 years into its life and, depending on which side of the fence you’re on, it could be seen as a crisis or an opportunity. In the case of the Park Square apartments, it was seen as an opportunity.

Although a story of success today, the Centretown Citizens (Ottawa) Corporation (CCOC) got off to a rocky start. In 1974, its first year of operation, proposals to purchase the Park Place Apartments, a rooming house at 183 Waverley, and a plan to construct a building on Gilmour were all turned down by the Canada Mortgage and Housing Corporation (CMHC).

[ ](http://ottawastart.com/wp-content/uploads/2014/06/lolProfile.jpg) Every week we publish a link to the Lunch Out Loud podcast, a weekly show produced by Nick Bachusky and co-hosted by Andrew Miller. This week we meet up with Ottawa and Gatineau home inspector, Eric Ayotte to talk about what new home buyers should be looking for, new technologies in the industry, the cold winter and problems he has seen lately and more! ...

_ “spring dreams crossed by lines” / photo by Christiane Wilke, from the OttawaStart Flickr Group _ Here are our contributors' picks for the best events in Ottawa this week. ** Thursday, April 3: Celebrate National Poetry Month with the A B Series ** ...