The gray Jay is truly Canada’s bird with traits that symbolize the Canadian spirit. Their range is nearly exclusive to Canada, and is found in every province and territory. They are a tough bird. The 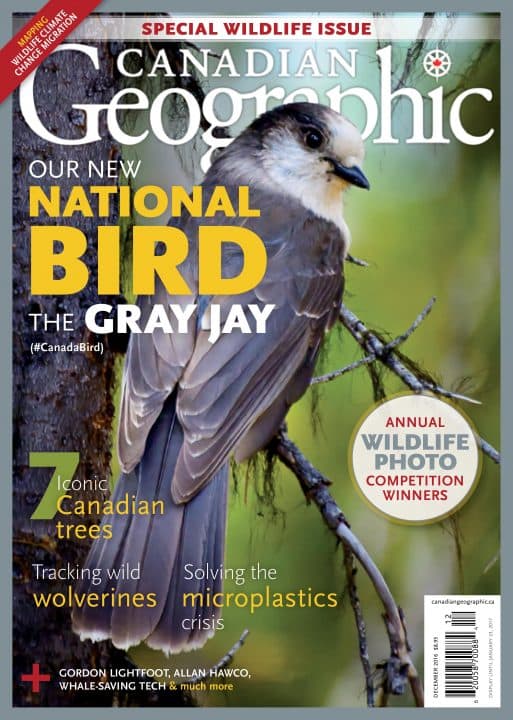 gray jay thrives in winter, nesting in the harshest, darkest month of the year and has been recorded incubating eggs in snowstorms at temps as cold as -30C. The gray jay is extremely friendly and an intelligent bird. It enjoys the same brain-to-body ratio as dolphins and chimps – nearly that of humans. It has been known for centuries as a companion to Indigenous Peoples, early explorers and outdoor enthusiasts. Its chattering and whistles are considered an early warning to hunters of nearby predators. There are stories of Gwich’in guides in the Yukon who tell of gray jays singing from tree to tree to lead a lost hunter home.

Canadian Geographic’s National Bird Project, launched in 2015, and attracted Canadians in surprisingly large numbers. The opportunity to cast a ballot for a favoured bird resulted in 50,000 votes, with many adding an essay or commentary. Canadian Geographic also sought the opinions of the leading experts and ornithologists in the country, including those of the its conservation partner, Bird Studies Canada.

Five birds garnered the most votes, including three which are already provincial birds: Snowy owl (Quebec), black-capped chickadee (New Brunswick), common loon (Ontario), Canada goose and gray jay. In September, the Honorable Catherine McKenna, Minister of the Environment, addressed a panel debate where five impassioned Canadians advocated for one of final species. The following day the hashtag #CanadaBird trended number one in Canada.

“Canadians’ enthusiasm for the National Bird Project tapped into something beyond expressing a preference for a particular species,” said the Honourable Catherine McKenna, Minister of the Environment. “The project ignited a groundswell of public support because those taking part recognized they were joining a movement to identify a new national symbol of pride, identity and belonging on the cusp of the country’s 150

An overall smaller version of a proposed expansion to the Château Laurier was presented to the public at an open house Thursday. In September, the original design faced substantial public backlash with many calling it inappropriate to the building’s historical design. ...

The prime minister who brought Canada into the 20 th century, Sir Wilfred Laurier, turns 175 this Sunday and Laurier House will be holding special events to celebrate. Get a glimpse at the lives of former prime ministers Laurier and William Lyon Mackenzie King with a guided tour of their former residence. ...