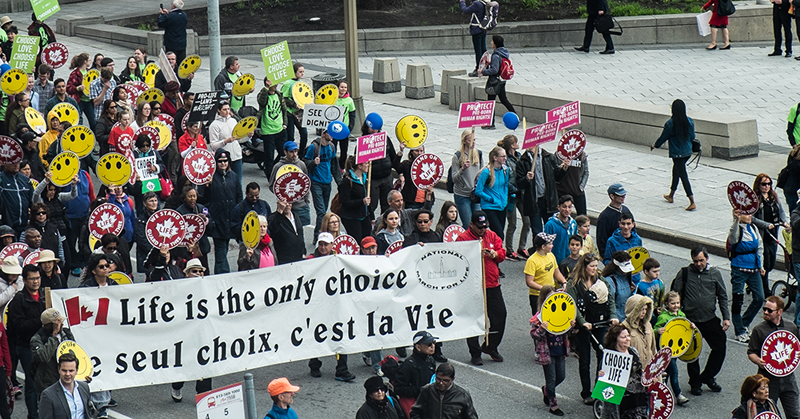 March for Life protesters in downtown Ottawa on May 11, 2017. (Howard Whiting/Lightchasers.ca)[/caption]

When the flag of a group opposed to abortion went up a flagpole on Thursday outside Ottawa City Hall, it set off a chain reaction of events that made for a messy day.

It all began with the March for Life, an annual demonstration by those opposed to abortion, which started on Parliament Hill. An estimated 6,000 people, according to the RCMP, gathered on the Hill and marched through downtown.

To commemorate the day, organizers arranged for Mayor Jim Watson to issue a proclamation and a flag with the march’s name went up outside City Hall.

While the proclamation is issued every year around this time by the mayor, the flag was a first. “I was going to congratulate them for letting us do this,” the _ Ottawa Citizen _ quoted Frank Barrett, 88, who arranged for the flag, as saying after finding out the flag was taken down. ** Delayed city response ** Once it became clear in the early afternoon that the flag was causing major backlash, the city and its officials had very little to say.

The only statements from the city were a copy of Watson’s letter to O’Connor and, much later, a memo from O’Connor explaining that the flag had been removed, as well as what city’s flag and proclamations policies are (which are now under review.)

There was no apology, although there were calls for one on social media. O’Connor did apologize, but it was directed at city council rather than the general public. ** Policy not followed ** It’s not clear when the flag went up, but the first tweets about it appeared around 1 p.m. It took city staff another hour or two to realize they broke their own flag policy by allowing it.

“A review of this matter has determined that the request for the flag raising was made by an individual,” he wrote in a memo released to the media. “This does not meet the criteria and, when this was discovered, the flag was taken down under my authority.”

The policy, which was adopted in 2006, says the city will, from time to time, fly the flag of a “charitable or non-profit organization to help increase public awareness of their programs and activities, or an organization that has helped to enhance the City of Ottawa in a positive manner.”

The policy specifically forbids flying the flag of a group “whose undertakings or philosophy are contrary to City of Ottawa policies or by-laws, espouse hatred, violence, or racism.”

O’Connor did not say if anti-abortion activists fell under those categories or if that was a consideration.

Part of the blowback was that Watson had issued proclamations on behalf of March for Life, giving the appearance that he was taking sides. O’Connor wrote in a memo that proclamations do not equal an endorsement because there is little discretion allowed.

“The Ontario Human Rights Tribunal has ruled that… the refusal of a mayor to issue a proclamation may constitute a contravention of the Human Rights Code,” if the request for a proclamation is not for something that would violate the code, he wrote.

The only conditions under which a proclamation can’t be issued are if they are politically or religiously motivated, go against city by-laws or policies, espouse hatred or discrimination, are not related to Ottawa or intended to make profit, he said. He also did not say if anti-abortion activism fell under these categories. ** Councillors left out of joint statement ** Meanwhile, a group of seven councillors issued a joint statement decrying the flag-raising.

Some of the remaining councillors whose signatures didn’t appear said they were out of office at the time.

Councillor Jeff Leiper, one of those who signed it, told _ OttawaStart.com _ not all the councillors knew about it.

“We were working quickly to get something out the door, and we did make a quick door-to-door effort around the hallway,” he wrote in a Twitter DM. “The people who signed were around and easily reached.”

Some councillors whose names didn’t appear had to do quick damage control on Twitter.

[caption id=“attachment_67963” align=“aligncenter” width=“1000”] Mayor Jim Watson issues anti-abortion proclamations, but that doesn’t mean he agrees with them. (Devyn Barrie/OttawaStart.com)[/caption] The controversy last week over an anti-abortion flag flying over City Hall reminded us of a problem with the city’s issuing of proclamations on request – that there is little discretion and one way or the other, it’ll come back to bite us. ...