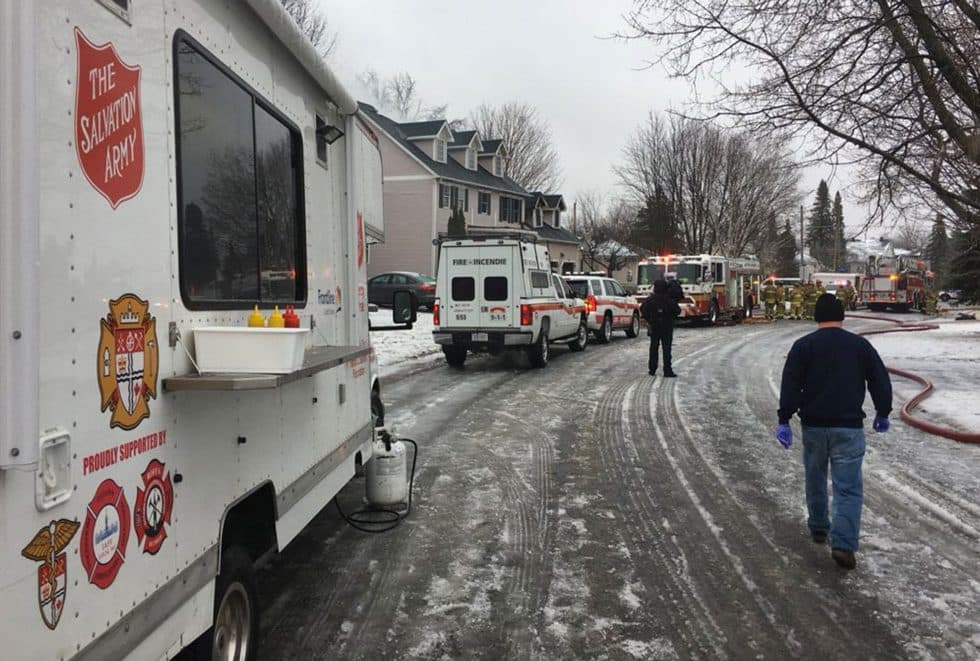 Via Salvation Army[/caption] _ ** Update: One firefighter was released from hospital on Monday and the other remains sedated, Fire Chief Gerry Pingitore tweets. ** _ https://twitter.com/ChiefPingitore/status/986270703006683136 _ (Ottawa Fire Services sent out this news release on Monday evening. The firefighters who responded were from Station 81 on Stittsville Main Street. Photo above is via the Salvation Army.) _

Ottawa Fire Services (OFS) received a 911 call at 1:19 p.m. reporting a fire in an electrical panel in the basement of a home in Stittsville. Persons were home at 24 Snowberry Way near Henry Goulburn Way and evacuated promptly when they discovered the fire. The first crew on scene confirmed heavy smoke conditions and immediately declared a working fire.

Firefighters engaged in a rapid offensive attack and crews searched the home for the origin of the fire. Smoke conditions and weather conditions were demanding which prompted Incident Command to escalate the blaze to a second alarm at 1:39 p.m.

Moments later a main floor collapsed and firefighters reportedly fell into the basement of the home. The Rapid Intervention Team (R.I.T) was immediately deployed and entered the home in search of the two unaccounted personnel. The first firefighter was confirmed out of the building at 1:49 p.m. and the second firefighter was rescued soon after. For the safety of the remainder of the crews the home was evacuated of all firefighters at 1:53 p.m.

Fire operations continued from the garage and the exterior. However, at 2:14 p.m. the garage was also evacuated and crews were now adopting a strictly defensive attack. Fire operations are still underway. This is a large loss fire and heavy equipment will be used shortly to secure the scene.

The firefighters worked diligently to keep neighbouring homes cool with streams of water and there are no significant damages recorded to these adjacent structures. A fire investigator is on scene to investigate a possible cause. They will be working alongside the Office of the Fire Marshal on this case. We like to thank our partners at the Salvation Army and Red Cross for assisting those impacted by this fire.

We would like to take this opportunity to thank our first responder partner agencies from the Ottawa Paramedic Service and the Ottawa Police Service. All personnel came together during today’s emergency and ensured injured firefighters were quickly cared for and escorted to the nearest hospital. We recognize their very important role in today’s events and thank them for their ongoing support.

Lastly, we would like to remind residents to safely evacuate their home when there are signs of smoke, no matter the color, place your call from outside the structure where it is safe to do so. Also, when evacuating a structure, please close doors behind you. This simple strategy can help limit fire spread and growth.