Around four years ago, I wrote a short piece for Ottawa Start about the Elphin Apartments, at the corner of Gladstone and Metcalfe in Ottawa’s Centretown. Given the parameters, I was generally pleased with the results but one thing really bothered me: just who was behind the apartment?

I was able to find out the architect was Ala-Kantti and Liff, that the general contractor was Howard Thoms, and that Radcliff Realties were the exclusive rental agents. All of that is relevant information, but none of it gets to just who was behind the project. 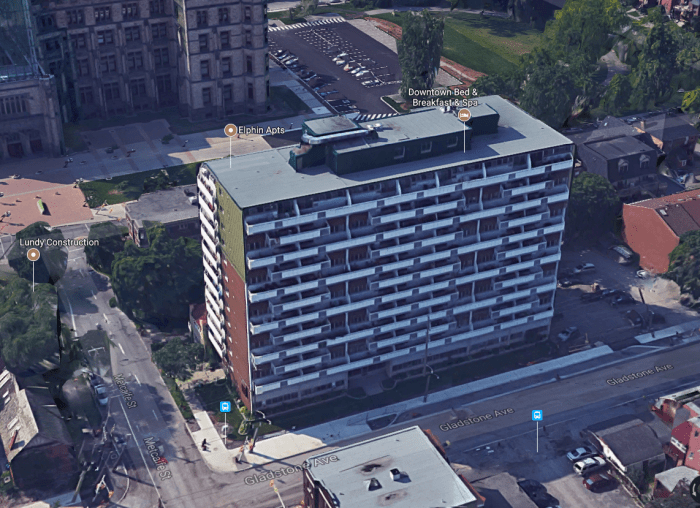 Who was it that brought us Centretown’s most playful modern apartment? (Google Maps)

Landis Realties is the company.

This fact does not appear to have ever been reported in the Journal or the Citizen , but a corporate or even semi-anonymous development was almost par for the course during the 1960s. At least when it was not a large developer like Minto, Assaly, or Campeau.

So then, who was behind Landis? As it turns out, Landis Realties was presided over by Ottawa’s own Rupert McClelland. In what Bob Ross would call a “happy little accident”, I’ve also written about McClelland’s earlier development career for Ottawa Start. Aside from how delightful the building, its mascot, and features were, there is only one thing that stood out. McClelland invested in a number of properties across the city in the late 1950s and early 1960s and tended to rent the homes out until he was ready to redevelop. 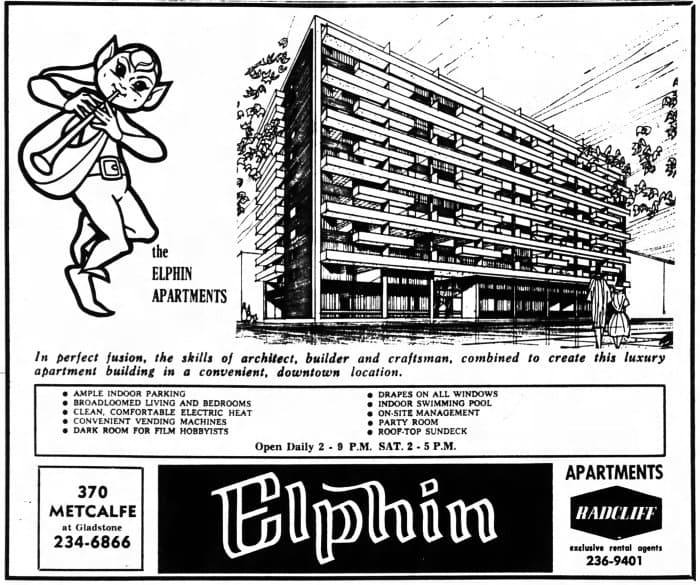 It’s the marketing. And the dark room. 1966⁄67 was a competitive rental market in Ottawa and small differences quickly became the difference. Source: Ottawa Journal, September 22, 1966, 20.

Nothing about that is surprising or out of the ordinary for land-banking developers: “right now” isn’t always the best time to build. This strategy took a bit more effort than many developers seemed to understand and McClelland soon found himself – at least partially – on the wrong side of the city’s property standards bylaw.

As such, the city condemned a number of McClelland’s properties: on Nepean, Carruthers, and Gladstone. McClelleand claimed that this cost him $13,000 in rental income and demanded redress, which he appears to have won.

Research undertaken in the Ottawa Journal shows that the fights between McClelland and the City had been going on for at least 7 years when shovels began to dig out the Elphin’s foundations.

It was all water under the bridge, of course. Developers often have to spar with City Hall and it seems to be well understood. McClelland continued in the property game well into the 1970s and 1980s.

The building was subsequently picked up by Leonard Potechin (Regional Group) and it remains in the company profile today.

[caption id=“attachment_83310” align=“aligncenter” width=“1000”] Chris Wang has a photo taken alongside his mentor for the day, Conservative MP Todd Doherty. (Devyn Barrie/OttawaStart.com)[/caption] It’s nice to see the old G.A. Snider Photographer sign on Bank Street finally has some company – and how appropriate that the mural that now sits below it was installed by Instagram. ...

The other day I needed to find a small conference room in Ottawa for about three hours on a Saturday afternoon for a brainstorming session. I asked for suggestions on Twitter and was surprised at how many different responses I received: ...