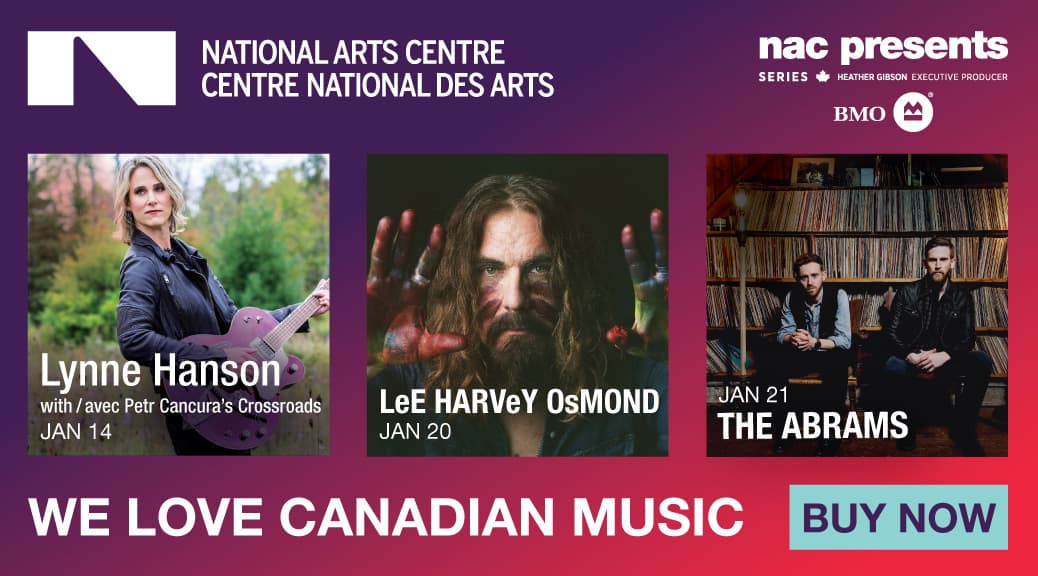 season, the all-Canadian music series ** NAC Presents ** , in partnership with ** BMO Financial Group ** , is proud to present over 65 performances throughout the 2016-17 season. From folk to pop, to country and francophone music, Ottawa will certainly be treated to a diverse array of amazing performances - all of which are happening under one roof! Despite the fact that the NAC is undergoing major renovations this year, it is still open and geared up to welcome Canadian music lovers.

Programmed by Simone Deneau, this season marks her last as Executive Producer as she retired in June after a remarkable 38 year career at the NAC. _ “It is with a little sadness—but also a great deal of pride and anticipation—that I present my last season as Producer of the all Canadian music series at the National Arts Centre.” _ Simone has passed the baton to Heather Gibson, former Executive Director of the Halifax Jazz Fest and Founder of In the Dead of Winter Music Festival, who is thrilled to be starting this new adventure at the NAC. _ “I am thrilled to be a part of the 2016-17 NAC Presents season. Simone Deneau has gathered some of Canada’s best singer songwriters in our biggest season yet - over 65 shows! From emerging artists to national icons, I am confident this will be a spectacular season of NAC Presents”, _ says Heather.

NAC Presents thanks title partner ** BMO Financial Group ** for their long-standing leadership support of this series. NAC Presents is grateful to the Slaight Family Foundation, whose Slaight Family Fund for Emerging Artists supports performances by emerging artists featured in the NAC Presents 2016–17 season. NAC Presents would also like to acknowledge its official hotel partner, ** Hotel Indigo Ottawa ** , and the official car of NAC Presents, ** Mark Motors of Ottawa – Audi ** ** .” ** For tickets and more information, click here…

The Horticulture Building at Lansdowne was a who’s-who of different cultures Wednesday night, for the launch reception of a year-long series of events called Ottawa Welcomes the World. The showcase is part of Canada 150 celebrations and will include dozens of events running from March to December. ...

More than 75 countries and international partners will participate in a year-long multicultural event series called “Ottawa Welcomes the World,” which will launch Wednesday evening. The launch will be held at the Horticulture Building at Lansdown Park and will run from 5 p. ...